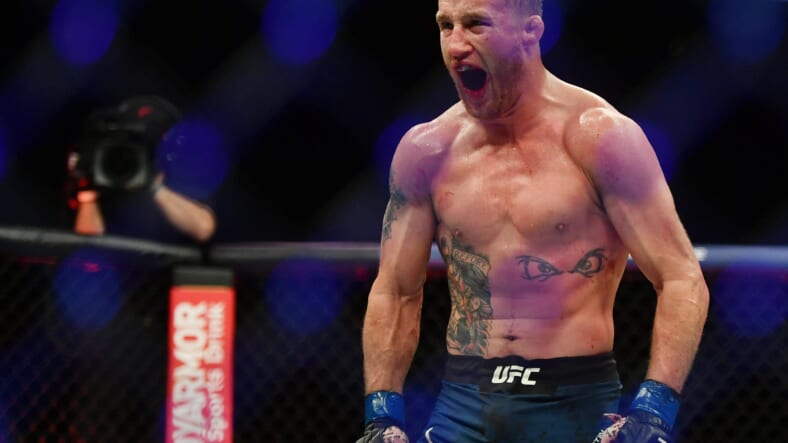 Justin Gaethje (22-3) had his eyes on the TV Saturday night watching UFC 257. The PPV was a huge night for the lightweight division and in the main event we saw the rematch between Conor McGregor (22-5) and Dustin Poirier (27-6, 1 NC).

In the co-main event of UFC 257, we saw Michael Chandler (22-5) make his debut against Dan Hooker (20-10). With incredible performances, Dustin Poirier and Michael Chandler both scored knockout victories on Saturday night.

Watching the action got Justin Gaethje excited for his return. The former interim UFC lightweight champion has been waiting for last Saturday before thinking about what he wants to do next.

Gaethje sat down with ESPN’s Brett Okamoto this week and talked about everything that’s been going on with him. He said that the UFC had approached him last week about his next fight, but he wanted to see how UFC 257 shook out.

Now that he’s seen the action, Gaethje is ready to go. Gaethje said that he would fight anyone who is a top contender in the division and he knows it will take a win to get another title shot.

The Highlight made it clear that he wants a top three guy in his next fight, but he will make an exception. That would be for the one and only Nate Diaz (20-12). On a potential UFC bout with Diaz, Gaethje said he would happily accept it.

Will the UFC book Diaz – Gaethje?

I’m not going to lie, I think all UFC fans would be pumped for a potential matchup between Gaethje and Nate Diaz. When the UFC was talking about Diaz’s lightweight return, I figured Gaethje was a name that they were discussing.

However, Gaethje said that there’s been no talks on that fight yet. The UFC’s lightweight division is so exciting right now and Justin Gaethje – Nate Diaz might be one of the most fun matchups that could be made. It’ll be interesting to watch this one play out.