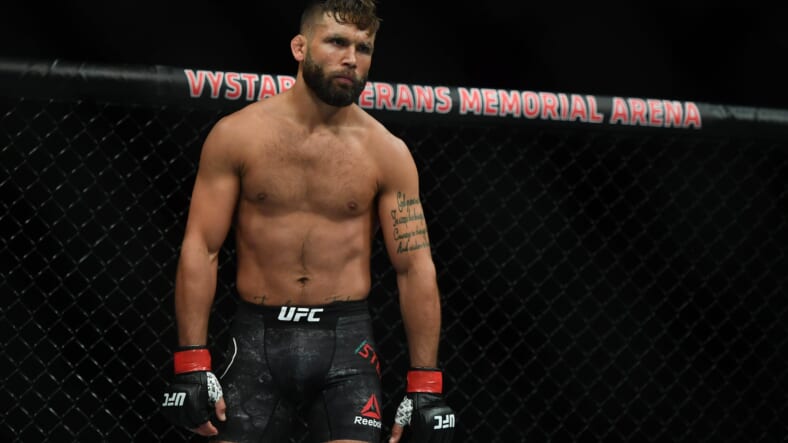 The UFC is finalizing a tremendous featherweight contest for their card on November 7th. First reported by MMA Junkie, the promotion is planning on booking Jeremy Stephens (28-18, 1 NC) against Arnold Allen (16-1).

For Jeremy Stephens, this is a make or break type of fight for the long time contender. Stephens will be entering the octagon on November 7th after going 0-4, 1 NC in his last five contests. Stephens was finished in two of those contests.

While they have all come against top competition, it’s still not a great look to the UFC when you’re riding a losing streak like this. This is the first time since 2018, that Stephens is not going to be facing a top contender in his next fight.

However, Lil Heathen is going to have his hands full. Arnold Allen is quite the exciting prospect in the UFC‘s featherweight division. Allen will walk into the cage on November 7th as the eighth ranked featherweight in the UFC. One spot ahead of the veteran, Stephens.

For Allen, this is going to be the biggest test of his UFC career. The 26 year old fighter from England made his UFC debut back in 2015. Since then, Allen has gone 7-0 with the promotion with most of his fights going the distance.

Allen has been in there with some recognizable names. Most notably, Allen has had wins over former Strikeforce champion, Gilbert Melendez, and Nik Lentz. We haven’t seen Allen since January when he was able to defeat Lentz by unanimous decision.

The November 7th card is being headlined by the light heavyweight title eliminator between Thiago Santos and Glover Teixiera. This fight is another great addition to the growing card which is turning out to be a must watch for UFC fans.