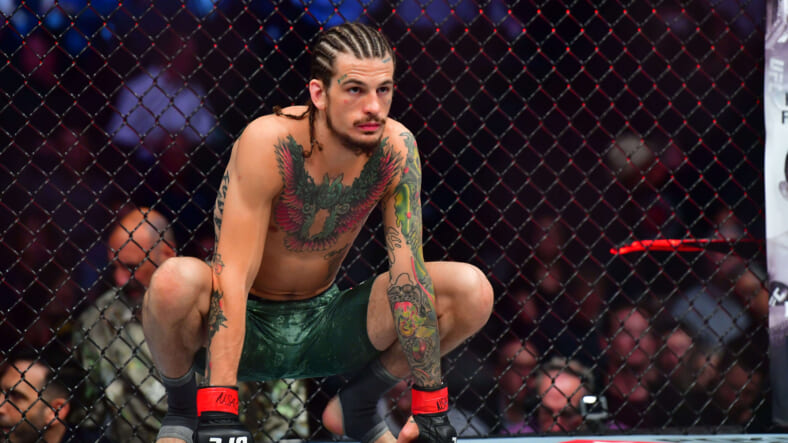 Tomorrow night on the UFC 260 main card, we will see a highly anticipated bantamweight matchup. One of the young stars in the sport, “Suga” Sean O’Malley (12-1), is making his return against Thomas Almeida (22-4).

The last time we saw The Suga Show as back at UFC 252. O’Malley took on Chito Vera in the co-main event. Early on in the fight, I was encouraged by what I saw out of O’Malley.

His speed and feints were giving Vera issues and it looked like we could be heading towards another O’Malley win. However, Vera started to land some nasty calf kicks and one completely deadened the leg of O’Malley.

O’Malley proceeded to roll his ankle a few times and Chito capitalized to get the TKO win. It was the first loss for O’Malley, but there’s still a lot of UFC hype behind him. Prior to that loss, O’Malley had two TKO wins in 2020 after a two year layoff.

O’Malley is going to be looking to get back on track against Thomas Almeida. A few years ago, many were looking at Thomas Almeida as a future UFC champion. Almeida was 21-1 heading into a matchup with Cody Garbrandt.

Garbrandt ended up starching Almeida on his run to becoming UFC champion. Since then, Almeida has gone just 1-3 inside the octagon. The last time we saw him was back in October where he dropped a decision to Jonathan Martinez.

When it comes to the hype around Almeida from a few years ago, I’m not sure it was really warranted. He had an incredible record, but a lot of that was padded. When the competition level really turned up, we saw him falter in the UFC.

However, you could also question the competition level of O’Malley. Now, when it comes to their skillsets, I really like Sean O’Malley. He’s longer, he’s crisper on the feet and he has very good skills on the ground that we really haven’t seen.

For Almeida to be successful at UFC 260, he needs to go right after O’Malley’s legs. Attack the lead calf and take the Chito Vera strategy. If he can’t, I think he’s going to get picked apart.

In addition to losing, we’ve also seen Almeida’s chin look incredibly suspect. If O’Malley lands clean tomorrow night, I think it’s over. In the end, I think O’Malley is going to get back on track with a TKO win at UFC 260.