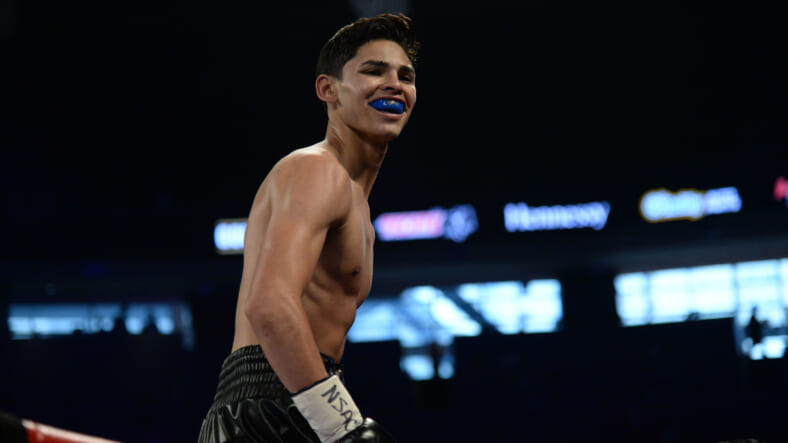 Could one of boxing’s brightest and younger stars be bound for the UFC? One of the most popular figures in boxing right now is WBC interim lightweight champion, Ryan Garcia (21-0). Garcia in a way is like the modern day Oscar De La Hoya.

He’s got the look and he’s got the skill to become a superstar. His skills in the boxing ring have led him to the interim WBC lightweight championship and a 21-0 record before he’s even turned 23 years old.

The plan has been in place for Garcia to lead the boxing world for years to come. However, Garcia has different plans. In fact, he’s not planning on sticking around in boxing very long.

Garcia was on the Rich Eisen Show this week and he talked about his desire to walk away from boxing at 26. He wants to retire undefeated and only fight if people truly believe he can’t win. Once he conquers all boxing challengers, he only sees one arena where people would doubt him.

That arena would be the UFC. Garcia mentioned a possible transition to MMA saying, “Say at 26 I retire and boxing is all good, right? You know what I’ll do? I’ll go prove to them (doubters) that I’m the best fighter all-around in the world. I will go to MMA to prove a point.”

Ryan Garcia to the UFC

It is worth nothing that Garcia has had some back and forth with former two-division UFC champion, Henry Cejudo (16-2). Granted, the talks centered around Cejudo potentially going to boxing to face Garcia.

I completely understand where Ryan Garcia is coming from. He wants to prove that no matter what the discipline is, he’s the best fighter in the world. However, that’s much easier said than done.

The reality is, nobody in the UFC’s bantamweight division could throw hands with Ryan Garcia. In pure boxing, he’s going to light up anyone in that division. We’re talking about one of the best boxers in the world here.

However, there is so much more to this than just your hands. Garcia would be young enough to really focus on MMA training if he wanted to make that transition, but it would take a long time to really learn.

In my opinion, the transition is so much easier for wrestler/grappler based athletes than pure strikers. For example, take Dillon Danis (2-0). Danis was purely a jiu jitsu competitor before transitioning to MMA.

It’s easier for an elite grappler to learn the skills of striking versus a striker learning all the other aspects. Garcia is an elite boxing. However, he’s extremely flat-footed when he boxes.

Think about some of the elite fighters in the UFC. They’d either light up his legs with kicks or take him straight to the ground and without being light on his feet, he’d have no answer. Garcia is young enough to learn the arts and make the jump, but it’s a lot more difficult than he’s making it sound.