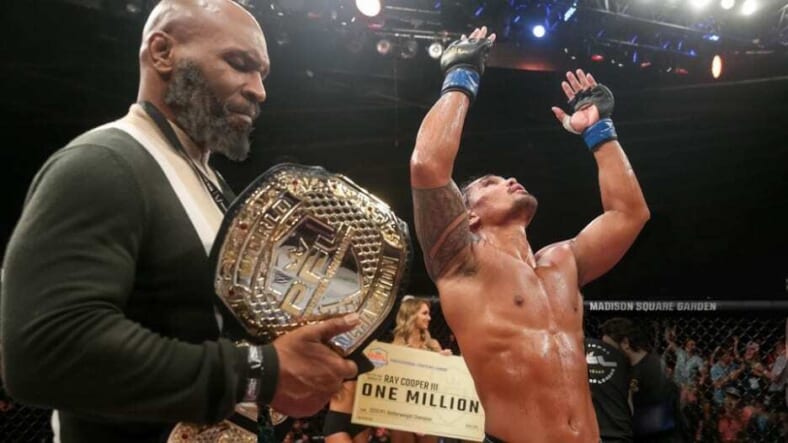 When the World Series of Fighting evolved into the Professional Fighters League back in 2017, it would have been easy for the organization to lose its momentum and fade into obscurity.

Instead, thanks to its game-changing league format and deep roster of talent, the PFL has exceeded just about every expectation put on them, and in just two short years, they have established themselves as the fastest-rising MMA promotion in the world and is right up there at the top, just behind the Ultimate Fighting Championship.

Probably what makes the PFL stand out the most among other organizations is their game-changing league format, which features a regular season-style elimination round, playoffs, and finals, with the last man or woman standing at the end of each tournament being crowned that yearâ€™s PFL World Champion. Apart from some gold around the waist, the newly-crowned PFL champion also gets a US$ 1 million grand prize, another aspect thatâ€™s unique to the PFL.

PFL CEO Peter Murray believes that the regular season format is something that all sports fans can gravitate towards.

â€œWe dialed in on what works in other sports, and we have the credibility and authenticity with MMA with great fighters and an incredible presentation and production value,â€ Murray explained in an interview with heavy.com. â€œBut when you overlay a true sports season format, broader sports fans will understand how that works. Itâ€™s programmatic. Thereâ€™s a beginning, middle, and end.â€

As great as the PFLâ€™s league format is, it would be nothing without top tier talent competing in it, thatâ€™s why the organization has also assembled a deep roster of some of the worldâ€™s most talented fighters featuring reigning champions like Kayla Harrison, Lance Palmer, Ray Cooper III, and Natan Schulte to veteran stars like Rory MacDonald, Olivier Aubin-Mercier, and Bubba Jenkins.

â€œWe all want exciting fighters. Iâ€™m looking for a guy thatâ€™s well-rounded in the game of mixed martial arts,â€ PFL President Ray Sefo said in a 2019 interview with Sherdog.com. â€œIâ€™m not looking for a [fighter] that just wants to take a guy down and be a wet blanket. I love wrestlers that can actually stand and bang, because they can take you down anytime, and then they can trade with you.â€

These new signings along with the already deep talent pool are sure to make the PFLâ€™s 2021 season something to watch out for.

While the fighters and the format are helping carry the PFL on the surface level, people behind the scenes like the management team as well as the leagueâ€™s partners are also making a huge impact.

All of these factors are helping bring the PFL to the pinnacle of the sport, alongside industry leaders such as the UFC.

â€œThereâ€™s room for another leader in this next evolution of the sport,â€ Murray shared on an episode of David Meltzerâ€™s â€˜The Playbookâ€™. â€œI have amazing partners, we have titans in our ownership group from media, sports, entertainment, and technology.â€