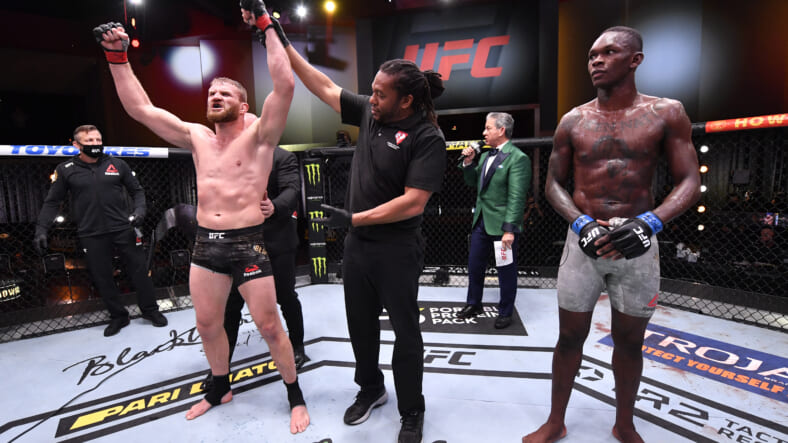 Earlier this week, the UFC light heavyweight champion Jiri Prochazka stated that he wanted a rematch with Glover Teixeira next. The two men just had a classic fight at UFC 275 where Prochazka came back to win the title in the final 30 seconds.

Prochazka stated that he wasn’t happy with his performance at UFC 275. Had the fight lasted the remaining 30 seconds, Glover Teixeira would have retained the light heavyweight champion. This doesn’t sit well with the new champion.

He wants to leave no doubts and that is why he wants to face Teixeira again. This leaves a tricky situation for former UFC light heavyweight champion Jan Blachowicz. Blachowicz and Prochazka had some words after the fight last month.

It appeared that the angle was set for a fight between the two men. A light heavyweight title fight between these two would be huge for Eastern Europe. I thought for sure that’s the direction the UFC would go. However, Prochazka has made things very cloudy.

UFC title shot or bust for the Polish Power

Jan Blachowicz enjoyed his time on top of the mountain. All he wants to do is become a UFC champion once again. He appeared on Ariel Helwani’s MMA Hour this week and talked about his desire to once again become a champion.

However, he mentioned something that really took me off guard. Blachowicz openly said that he would consider dropping to 185 pounds and facing off against Israel Adesanya. Worth noting that Blachowicz has never fought at 185 pounds.

However, if a UFC title was on the line, Blachowicz said he’d do it. Blachowicz and Adesanya have history. The two men fought at UFC 259 and Blachowicz won a decision. To date, Blachowicz is the only man to defeat Adesanya inside the octagon.

However, it appears that Adesanya’s next fight is also set. The UFC seems to be moving forward with Adesanya taking on Alex Pereira. Again, it appears that Blachowicz is the odd man out here.

What likely is going to happen is Blachowicz next fight will be a title eliminator. Whether it’s at 205 or he dips his toe in the pool at 185, Blachowicz is likely to get a top contender fight, but he likely won’t be getting a UFC title shot.