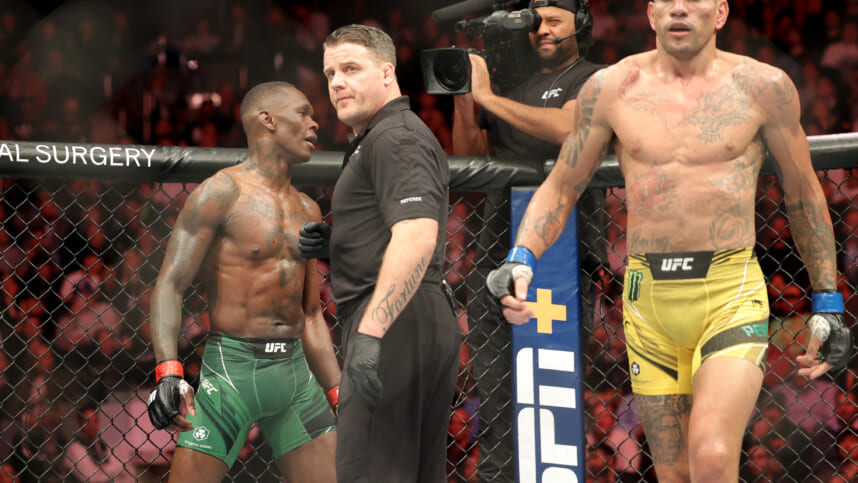 This past Saturday in the headliner of UFC 281, we saw the highly anticipated middleweight title match between Israel Adesanya (23-2) and Alex Pereira (7-1). This was their third matchup in combat sports, but their first in mixed martial arts.

Pereira was fast-tracked to the middleweight after just three fights. The reason why is the fact that he was 2-0 over Adesanya in kickboxing including a knockout. Adesanya was adamant that he would win in this arena and he would walk out retaining his middleweight title.

The first round was very back-and-forth with both high-level strikers having their moments. Then, just as the bell sounded in the first, Adesanya rocked Pereira bad. Pereira recovered and went on to win the second round putting a ton of pressure on the champion.

The third and fourth rounds saw Adesanya use grappling to secure the rounds. Entering the final round, Pereira needed a finish to become UFC champion. He found a second wind and really pushed on the gas. He hit Adesanya with a big uppercut that backed him up.

Then, he landed his patented short left hook which rocked Adesanya bad. Pereira was all over him and Adesanya looked out of it. Adesanya wasn’t defending well and the referee stopped it crowing Alex Pereira as the new middleweight champion of the world.

Make no mistake about it, there will be a rematch after UFC 281. Adesanya had defended the title five straight times and this is the first time he’s ever lost at 185 pounds in his MMA career. Yes, Pereira is now 3-0 in combat sports over Adesanya, but in the UFC, it’s 1-0.

I would expect these two to run things back in late spring or early summer next year. Adesanya admitted that he had a couple of health things to take care of first. However, all parties seem to be on board with a rematch between these two.

It’s crazy that this fight was much like their second fight. Adesanya rocks Pereira early, Pereira saved by the circumstance (standing eight count in kickboxing/end of the round in MMA), then Pereira finishes him late after being down.

It’s clear, Alex Pereira has the upper hand, but it’s not a drastic separation between the two men. They are very close in terms of their skill. However, Adesanya has to do some real soul searching because it’s clear that Pereira is his boogeyman.