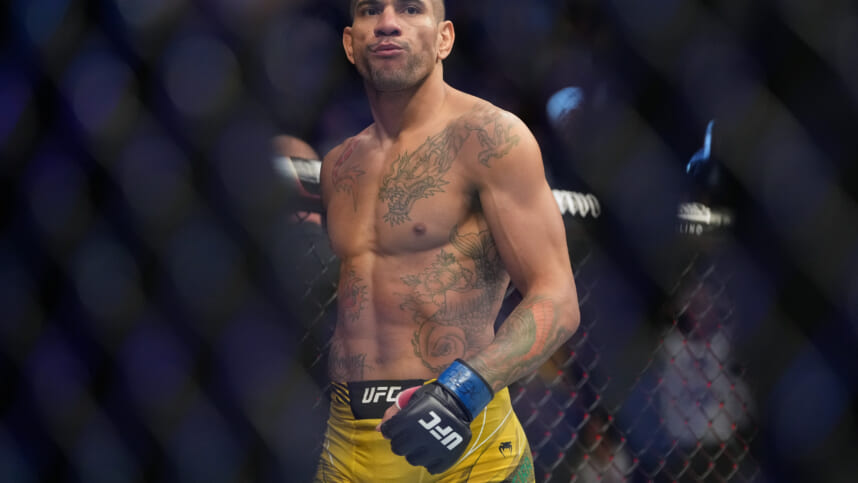 Tonight in the headliner of UFC 281 we saw the middleweight title fight that we all have been waiting for. The champion Israel Adesanya (23-1) was looking to defend his middleweight title for the sixth time as he took on a familiar foe in Alex Pereira (6-1).

Pereira entered the contest on the heels of three straight wins inside the octagon. Meanwhile Adesanya has remained perfect outside of his loss to Jan Blachowicz when he attempted to become a two-division champion.

The UFC 281 headliner kicks off with no touch of the gloves. Jump kick from Pereira starts the striking and a low kick from Adesanya starts his striking. Another leg kick from Adesanya. It looks like Adesanya is investing heavy in the leg kicks early on.

Two low kicks connect from Pereira. These two are just trading leg kicks early on. Now Pereira is doubling up on the kicks. Stiff jab from Adesanya. Both men look very comfortable here. Another nice jab lands for Adesanya and a right hand over the top from the champion.

Pressure here from Pereira and he just misses with a left hook. Pereira backing Adesanya up here and Adesanya circles away. Another nice jab from the champion. Low kick from Pereira. Big body kick from Adesanya. Now Pereira is upping the pressure and lands a body kick.

Another huge body kick from Pereira and he gets close to landing a big left hook. They clinch and Pereira is doing solid work to the body. Pereira gets rocked right at the end of the bell. That steals the round for the champion. High drama at UFC 281.

Entering the second at UFC 281 and all the momentum is with the champion after the way the round ended. Here we go for round two. Big leg kick from the champion. Pereira right back on the pressure. Big left jab from the challenger against the fence.

They clinch again and Adesanya is landing nicely here. Big knee to the body from Pereira and they settle into the clinch. Adesanya goes for a single leg but Pereira defends well. Pereira was doing well along the fence so I’m a little surprised he engaged a clinch.

They break and immediately a 1-2 lands for Adesanya. These two are standing right in the pocket. Huge lefts from Pereira land clean on Adesanya but he took them well. That’s some of the cleanest shots Adesanya’s taken in his UFC career.

One minute left and Adesanya forces a clinch. Short knees to the body land for the champion. Takedown attempt from Adesanya, but nothing is there. They break and Pereira lands a clean head kick. Takedown at the end of the round from Pereira. Round ends and I think it’s 1-1 at UFC 281.

Entering the third at UFC 281 and this is such a good fight through two. Jab to the body from the champion starts the striking. Low kick from Adesanya and he tries to go high. Low kick and a right hand over the top from Adesanya.

Now Pereira starts pressuring. Good body work now from the challenger and they end up in a clinch. Grappling exchange and Pereira gets taken down by Adesanya. Adesanya has the back of the challenger. Pereira is in all sorts of trouble here with Adesanya on his back.

Adesanya gets the hooks in against the fence. Nice shots from the back from Adesanya. Pereira is trying to use the fence to get back to his feet, but Adesanya is heavy here with his control. The challenger’s lack of ground knowledge here is really hurting him.

Pereira gets back to his feet briefly, but Adesanya drags him right back down. A scramble and Adesanya ends up in the guard of Pereira. Big elbow from the bottom from Pereira, but he looks exhausted here with 40 seconds left in the round. Adesanya lands as the round ends and it’s 2-1 Adesanya at UFC 281.

Left hook and a jab now from Adesanya. Now a jab from Pereira. Takedown attempt from Adesanya and Pereira defends for now. Two minutes left in the round and Adesanya is just hanging on Pereira here. Not much action here in the clinch.

A leg kick from Adesanya is checked by Pereira and Adesanya might have hurt his leg there. Pereira heavy on the pressure here. Major heat coming from Pereira. Adesanya is hurt badly. The challenger is all over him. Adesanya is out on his feet and the referee stops it. Alex Pereira is the UFC middleweight champion.