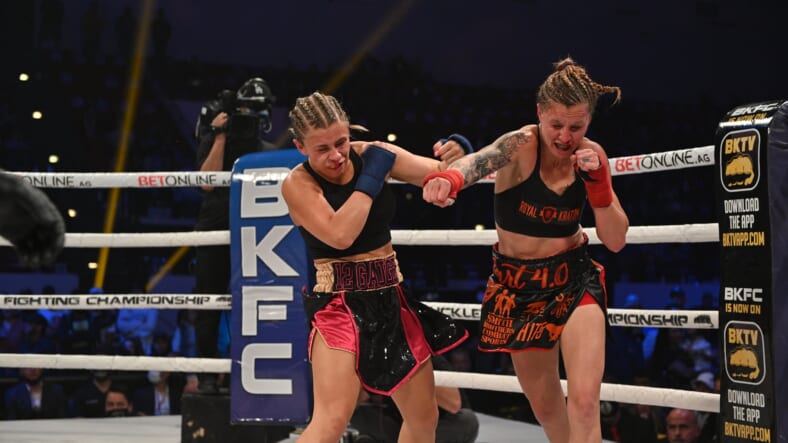 Britain Hart throws a punch against Paige VanZant during the main event of the BKFC KnuckleMania. BKFC Photo

Just three weeks after her sensational win against former UFC star Paige VanZant in the main event of the BKFC KnuckleMania, Britain Hart is already back in training.

She’s hoping that her next fight would be for the title after her heart-stopping win against VanZant.

“Iâ€™m still on Cloud 9 obviously. Iâ€™m more motivated than ever thatâ€™s why Iâ€™m out here in Puerto Rico training. That [win] has changed my life,” Hart told Empire Sports Media via zoom call.

While she hopes her next fight would be for the title, she’s also setting her sights on Jenny Savage, who made a scene during Hart’s KnuckleMania post-fight interview.

“After I won over [Randine] Eckholm in BKFC 14, I called Paige out and Paige took it the liberty to come to the ring with me, so I really think that anyone who has the guts and the courage to come to the ring and challenge me in the ring when Iâ€™m on my fight night deserves to lose to me,” Hart said.

“Jenny Savage came in and was pretty disrespectful coming to the ring on my main event moment. So honestly, I wanna say Jenny Savage is next. I gotta show her the same thing I had to show Paige. You donâ€™t come to the ring with me on my fight night.”

The brewing rivalry between the two bare-knuckle boxers apparently started after Hart got the Paige VanZant fight which Savage also wanted.

It picked up steam when Savage made her BKFC debut last December with Hart as a guest fight commentator.

Hart said she went to Savage to congratulate her on her second-round stoppage of Sheena Starr at BKFC 15. She was complimentary of the Tennesee Gangster’s “really good overhand.” But Savage instead took offense and answered back: “Thatâ€™s not my best punch. You havenâ€™t seen my best punch yet.”

â€œI just want whoever is next. I canâ€™t say anybody specifically because I donâ€™t know. Do I want Britain Hart? No, because I beat her. I know Iâ€™ll beat her again. I know sheâ€™s made some improvements. But sheâ€™s made improvements against people that are nothing close to my level. So I feel like she needs a little bit more time in order to catch up, to be able to have some chance in a fight with me,â€ Ferea told mymmanews.com recently.

Hart was visibly pissed upon learning Ferea’s comments and blew her top.

“Itâ€™s a ridiculous statement. Anybody could look at that Paige VanZant [fight]. Christine, Iâ€™m sorry to hate on you, like mad respect to you. The fact that I beat a UFC veteran, a UFC athlete who trains in the American Top Team, again on what level are you putting yourself on? Misfit isnâ€™t undefeated in the BKFC. Sheâ€™s beatable. Helen [Peralta] did it. The fact that sheâ€™s already saying sheâ€™s a level above fighters that come from the UFC and Bellator and other things like that, just shows where her mind is and her mind is not in the right place,” Hart said.

Hart said that she’s tired of Ferea’s flip-flopping statements and added that Ferea’s win against her isn’t convincing enough not to warrant a rematch.

“Sheâ€™s flip-floppy. ‘One minute, Iâ€™m retiring from BKFC, and then the next minute, oh give me someone next. Britain Hart is the same fighter, Britain Hart has made improvements.’ Iâ€™m tired of her back-and-forth, wish-washy stuff. The rematch? Yeah for sure. Again, she didnâ€™t knock me down. I never hit the canvass with her. I got a doctorâ€™s stoppage with that cut under my eye. The fact that she even wants to say thatâ€™s a glorious knockout is just ridiculous. You donâ€™t have to like me as a fighter and like her as a fighter,” Hart said.

Ferea holds a 3-1 record in the BKFC and was the first woman to win the Police Gazette title. Her lone loss came at the hands of Peralta in 2019 in what is considered to be one of the best BKFC fights of the year.

Ferea last saw action in September last year when she stopped Callie Cutler via second-round TKO. She stunned everyone when she announced on her Instagram last January that she’s retiring from BKFC.

But she was quick to come out of retirement and announced that she’d be fighting in May.

“I guess sheâ€™s just salty that sheâ€™s not the center of the attention and the limelight is not on her. So sheâ€™s gonna come up with any story she wants. She knows she does not want to fight me. Of course, she doesnâ€™t want to fight me because Iâ€™m getting better. I just beat Paige VanZant. I donâ€™t know what sheâ€™s on. She lost mad respect from me. I canâ€™t respect someone who changes their statements. Be real. Be yourself. All her entitlement. If you want that humble pie and a wake-up call, then you got me. If you donâ€™t want it, then we all know why,” Hart said.

Both are intriguing matches. But whichever BKFC decides to hold next, Hart is ready for it.