After sensational performance at UFC 265, what’s next for Jose Aldo? 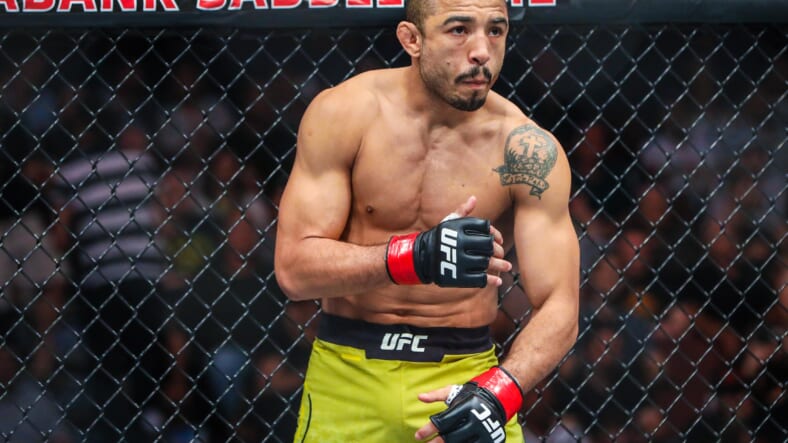 This past Saturday at UFC 265 in the co-main event, Jose Aldo (30-7) took on Pedro Munhoz (19-6). Aldo was looking to pickup his second win in the bantamweight division while Pedro Munhoz was looking for the biggest win of his UFC career.

Heading into this fight, the betting odds were basically dead even. We’ve seen Pedro Munhoz perform at a high level in the bantamweight division for a while now. Munhoz held wins over the likes of Jimmie Rivera and former UFC bantamweight champion Cody Garbrandt.

While Aldo is a legend of the UFC, he’s still relatively unproven at bantamweight. The former featherweight champion was 1-2 in three fights leading into UFC 265. Granted, he should be 2-1, but he was robbed against Marlon Moraes.

This fight with Munhoz was going to tell us a lot about the former champion and the fight did just that. Aldo put on one of the best performances he’s had in a long time at UFC 265.

For all three rounds, his lightening fast combinations proved to be too much for Munhoz. Munhoz had success here and there, but for the most part, Saturday night was all about The King of Rio.

After the fight was over, there was one name that Aldo had in mind. Aldo wanted a shot against former UFC bantamweight champion TJ Dillashaw (17-4). He wanted the two of them to fight in a title eliminator.

While that doesn’t sound like a bad idea, it won’t be able to happen. Dillashaw tore some ligaments in his knee during his win over Cory Sandhagen a couple of weeks ago. Dillashaw is sidelined three months and when he returns, he’s getting a UFC title shot.

With that, Aldo will have to look at a different opponent. To me, there are two names that make a lot of sense. Rob Font (19-4) is one of the names that stands out. Font has won four fights in a row to put himself right into the title picture.

He’s known for his sensational boxing and a matchup between him and Aldo would be must-see. Another option for Aldo could be a fight with Dominick Cruz (23-3). At one point, Cruz vs Aldo was considered to be a UFC superfight.

However, both are in much different spots in their careers now. Aldo is near the top of the division at 135 and Cruz is making his way back up the latter. Perhaps the UFC decides to have these legends fight it out for a shot at a title eliminator next.