After losing his fourth straight at UFC 260, what’s next for Tyron Woodley? 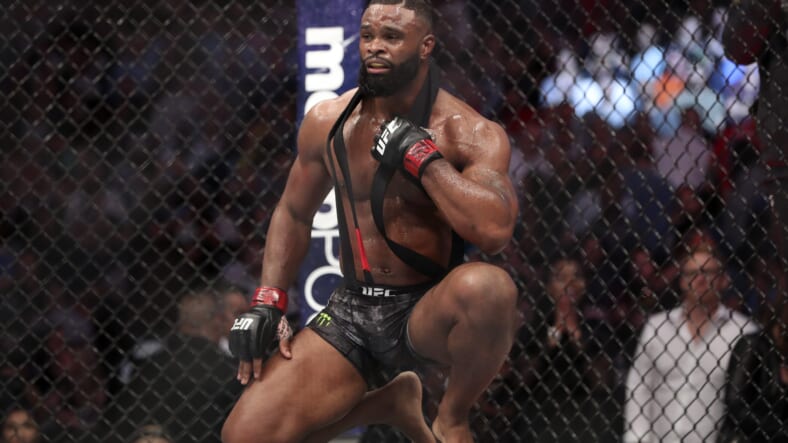 This past Saturday at UFC 260, Tyron Woodley (19-7-1) was looking to snap his losing streak. The former welterweight champion took on Vicente Luque (20-7-1) in the co-main event.

A couple of years ago, Woodley looked like he could retire as the UFC welterweight champion. He had dynamite in his hands and his wrestling ability made him a nightmare matchup for anyone in the division.

However, something drastically changed. Starting with the Kamaru Usman fight, Woodley just appeared lost in the octagon. Entering UFC 260, Woodley had lost three fights in a row and didn’t win a single round.

There seemed to be no urgency from the former champion and he just looked lost. However, that is not what happened on Saturday night. Woodley immediately ran to start the fight with a massive right hand.

The former UFC champion was extremely aggressive and he was looking for a finish. Woodley landed a massive shut that buckled the legs of Luque and he went in for the kill. However, he left himself open for counters and Luque landed an even bigger shot.

Woodley looked out on his feet and Luque took advantage. The former UFC champion shot in for a sloppy takedown when he was out of and Luque locked up a choke to get the first round finish. Tyron Woodley has gone from one of the best in the world to losing four straight.

The one thing we know for sure is that Woodley’s UFC career is over after Saturday night. UFC 260 was the final fight on Woodley’s contract with the promotion and I cannot see any scenario where they would resign him.

The promotion has had their issues with Woodley and with him having lost four in a row, they will let him walk. I was very encouraged by what I saw in terms of the urgency from Woodley on Saturday night.

Yes, he lost in the first round. However, that was the best version of Tyron Woodley I’ve seen since his Darren Till title defense. So, where does the former UFC champion go from here?

I think there are likely two options. He is either going to retire or he’s going to Bellator. Woodley already has a relationship with Scott Coker from his Strikeforce days and I could see there being mutual interest.

Something tells me that Woodley doesn’t want to go out on his performance at UFC 260. I think the former world champion is going to want to go out with a victory. That could very well come in Bellator if he decides to keep fighting.