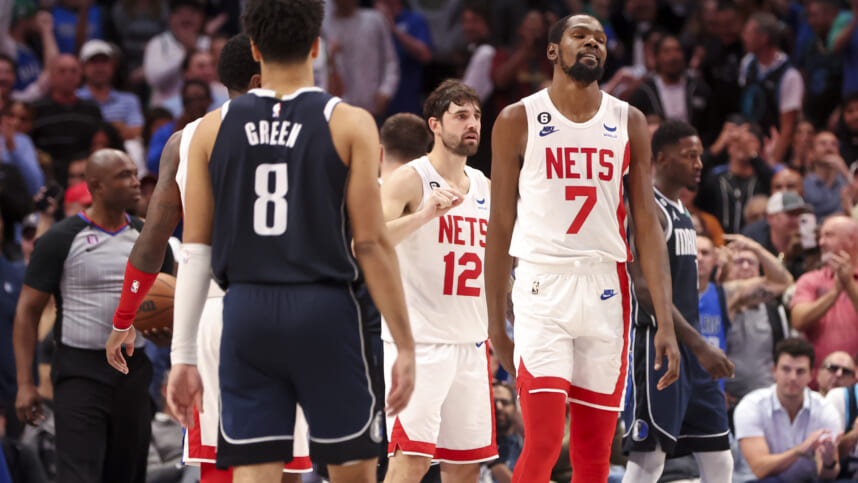 Kevin Durant took the blow like a man and quickly apologized to his teammates after his recent comments about the rest of the Brooklyn Nets‘ starting five without Kyrie Irving were blown out of context.

Durant was recently quoted ripping off the Nets’ perceived inferior starting five when pitted against the elite teams in the league.

“Look at our starting lineup. Edmond Sumner, Royce O’Neale, Joe Harris, [Nic] Claxton and me. It’s not disrespect, but what are you expecting from that group? You expect us to win because I’m out there. So if you’re watching from that lens, you’re expecting us to play well because No. 7 is out there.”

Durant clarified his misquoted statement on his podcast with Eddie Gonzales on Boardroom.

“I sent a text out to the guys. Because I really felt bad about that s–t. To the point where it’s just like damn, I’m embarrassed to walk in front of my teammates. Because I’m like ‘f–k I didn’t mean it that way, and I know it’s plastered everywhere, and I know your friends and family sent this to you, and it’s just like… f–k. Because my intentions weren’t to have that reaction, it was more so to like calm our fans, which are Nets fans, because they’ve been hearing so much about our team to the media and I’m concerned about that as a player.

I feel like I represent the fanbase that I’m playing for, so like any chance that I get to calm the noise a little bit, and kind of tell them the state of our team, I don’t mind doing it. But I think my approach could have been way better. I could have said stuff way different. Explained it better. But I’m glad Chris came out and did that, and I’m glad that we can do this.”

It seemed that all’s well that ends well as the Nets responded with two straight wins following Durant’s comments.

Durant had seven assists that went with his 26 points, which marked his 17th straight 25-point game to start the season, getting past Michael Jordan’s 16-game streak during the 1988-89 season.

Durant hopes to extend that streak Tuesday night with Ben Simmons’ first game in Philadelphia since a messy divorce with the Sixers franchise serving as the backdrop. Without the Sixers’ Big 3 — Joel Embiid, James Harden and Tyrese Maxey all nursing foot injuries — Durant is in great position to extend that streak and let the good vibes around the team these days flow.