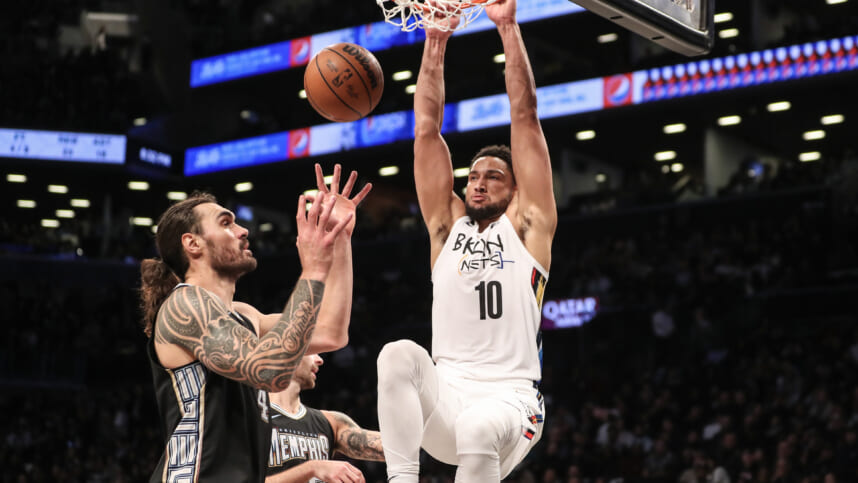 Simmons continued his rise with a season-high 22 points in the Brooklyn Nets‘ 127-115 victory over the undermanned Memphis Grizzlies Sunday night at Barclays Center.

It was the Nets’ second straight win and Simmons’ third straight double-digit scoring performance this season as he looks forward to his return to Philadelphia on Tuesday night.

But his former co-star in Philadelphia, who turned sour on him after his messy exit, will miss the much anticipated Nets-Sixers showdown with a foot injury.

Embiid, who is expected to miss at least two games, joins James Harden (foot) and Tyrese Maxey (foot) on the sidelines, putting the Nets in a good position to win three in a row and move to .500 just for the second time this season.

Simmons, who started at center with Nic Claxton unavailable for personal reasons, took off from where he left on their road trip. He aggressively attacked Memphis center Steven Adams for his first basket of the game — a turnaround hook shot.

Simmons hit six of his first seven shots and wound up with a highly efficient shooting night (11 of 13 field goals) with eight rebounds and five assists.

The returning Kyrie Irving registered a 28.8 net rating, the highest among Nets players, but Simmons was not far behind with 25.3 as he is quickly regaining his All-Star form.

Simmons said he’s ready to play in Philadelphia in what is expected to be a hostile crowd, given the circumstances of his exit from the franchise that made him the top overall pick in 2016.

“I know what’s coming. That’s part of the game. Philly fans, one thing about Philly fans is they are incredible. They are die-hard Philly and they are everything Philly, whatever it is. I respect that about the city. It’s a sports town. I was talking to Yuta [Watanabe] before the game about what it’s like to play in Philly, and it’s an incredible opportunity to put on whatever jersey it is. That’s Philly, and it’s a unique experience.”

The Nets are primed to regain their contender status with Simmons’ inspiring play and Irving’s return from a team-imposed eight-game suspension.

Simmons, acquired in the Harden trade, averaged 16.0 points, 8.7 rebounds and 5.0 assists over his last three games as the Nets improved to 8-9 after a 2-6 start.