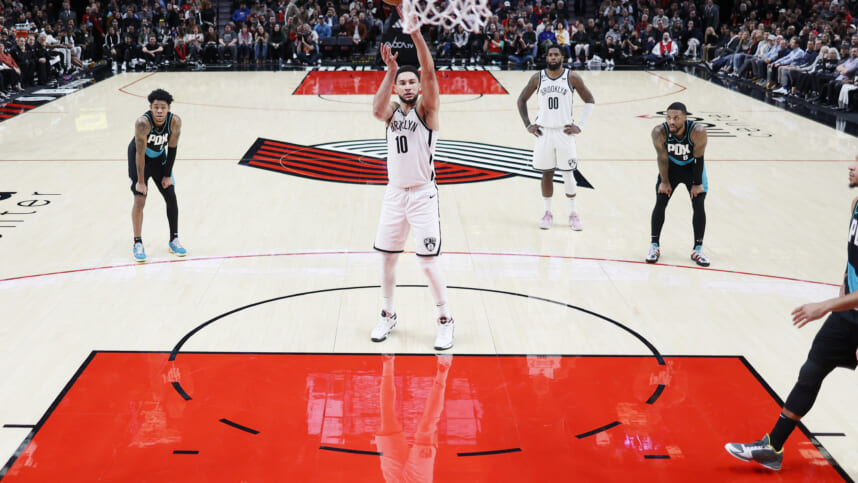 Ben Simmons is starting to regain his All-Star form.

And that’s good news for the Brooklyn Nets, who squeezed out a 109-107 win in Portland Thursday on Royce O’Neale’s tip-in.

Simmons’ big night capped the Nets’ West Coast swing in high spirits as they headed home with Kyrie Irving waiting in the wings.

Irving is reportedly set to rejoin them Sunday when they host last season’s Western Conference finalist Memphis Grizzlies, after missing eight games in the wake of the antisemitism scandal.

But on Thursday night, the spotlight belonged to Simmons.

The former three-time All-Star foiled the Trail Blazers’ ‘Hack-A-Ben’ strategy down the stretch.

Knocked for his poor shooting and shying away from big moments, Simmons hit 3 of 4 free throws in the final minutes. His last two freebies gave the Nets a 103-99 buffer with 2:56 left.

“I love those moments. I’m not going to shy away. That was their plan. Obviously, it didn’t work. We were able to convert a couple of free throws, get some stops. Just keep building. I like those moments.”

It was the icing on the cake to Simmons’ best game since returning from a 470-day layoff.

The former no. 1 overall pick finished with 15 points and 13 rebounds, both season highs, with seven assists that left Nets superstar Kevin Durant, who tied Michael Jordan’s record of 16 straight games with 25-plus points to start a season, impressed.

“Incredible! I’m just happy for him because he’s been trying to get his form back, trying to figure his rhythm out. [Thursday night] I think he did a good job just talking up, commanding the offense, commanding the team on the defensive side of the ball. He was incredible. So we’re going to keep building on that and hopefully we’re able to get this next one, but he controlled the game and was able to get us back into it.”

Simmons ramped up the level of his aggressiveness in attacking the rim from his 11-point effort in Sacramento two nights earlier.

“I’m coming. I’m getting there, man. It’s taking a little bit of time, but I got my own back. My teammates got my back, my coaches.”

Projected to be the Nets’ defensive lynchpin, Simmons struggled at the start of the season. But Jacque Vaughn’s strategy to utilize him as starting center Nic Claxton’s backup has worked wonders.

Simmons’ defensive versatility was on full display as he shifted from defending Jusuf Nurkic to Trail Blazers superstar guard Damian Lillard with ease and effectiveness.

It was very encouraging, according to Vaughn.

“Kind of what we envisioned him doing everything for us. A lot of people can’t do that. And we can continue to grow with him and understand him, his game, how he benefits, and with who. It’s very encouraging.”

With Simmons’ confidence growing and Irving returning, the Nets are looking forward to better days ahead after a tumultuous start to this season.

Their newfound strength will be tested against playoff contenders (Grizzlies, Philadelphia 76ers, and Toronto Raptors) over four days beginning Sunday.