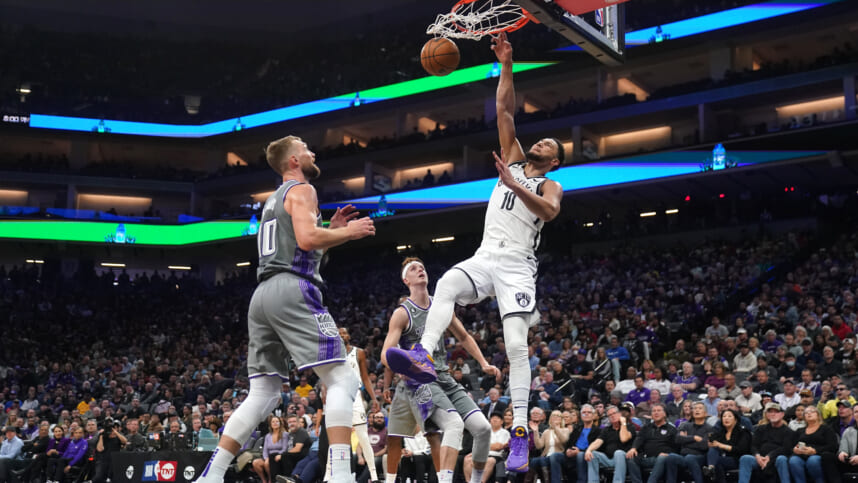 Brooklyn Nets point center Ben Simmons finally scored in double figures for the first time in more than a year.

But it quickly became an afterthought as the Nets fell to the rising Sacramento Kings in a humiliating fashion — a 153-121 loss on a nationally televised game — Tuesday night for their second straight defeat in their five-game West Coast trip.

Simmons produced 11 points on 5 of 7 shooting, including an alley-oop dunk off a Seth Curry lob in the second quarter. He added five rebounds, three assists, and one steal in 20 minutes off the bench, easily his best game since his return from his mental health issues and back problems.

He aggressively attacked the rim in transition and never hesitated with his shot around the basket, a promising sign for Simmons, who was reportedly a source of frustration around the Nets’ organization before this solid effort.

According to multiple sources with direct knowledge of the situation, the frustration surrounding Simmons had been building in recent weeks within the organization. The coaching staff and players have been concerned about his availability and level of play, with some questioning his passion for the game, those sources said. But even when he did play, Simmons’ struggles in his first nine games this season were part of the Nets frustration as well.

Simmons has already missed seven games since his return from a long 470-day layoff because of a new injury — a swollen knee. He’s having the worst season of his career. Entering Tuesday’s game, Simmons averaged 5.2 points, 6.2 rebounds, and 5.9 assists in his first nine games, all career lows.

But Simmons was the first to admit it would take a while before he could get his rhythm back after everything that he went and still going through.

The much-maligned former three-time All-Star pushed back that his new injury is made up.

“You’re obviously not gonna be happy when anybody’s out. But for me, I’ve been dealing with the knee since the start of the season. It’s been swollen. I had PRP (injections). I had blood drained a couple times. So it’s not a made up thing, you know? It’s a real thing.

I get (the skepticism), but I think the one thing with me is that I’m a competitor. I want to win and play. So I’m gonna do what I can to get out there.”

Ben Simmons via The Athletic

According to Hospital of Special Surgery, “Platelet-rich plasma (PRP) therapy uses injections of a concentration of a patient’s own platelets to accelerate the healing of injured tendons, ligaments, muscles and joints. In this way, PRP injections use each individual patient’s own healing system to improve musculoskeletal problems.”

Simmons was expected to anchor the Nets’ defense, but that hasn’t panned out yet due to his availability issues hampering his assimilation with his new team and now, with a new coach.

Jacque Vaugh, who took over from Steve Nash, has been utilizing Simmons more as a backup center to Nic Claxton off the bench. He’s tried to surround Simmons with shooters and counted on him to push the pace whenever he grabs the rebound.

Vaughn was encouraged by what he saw in Simmons Tuesday night, perhaps the only silver lining in the disappointing loss.

“[Simmons’] first attack to the rim was great. I thought he pushed to pace. A lot of paint attacks. I think the game was at his speed. He was able to get the ball to his teammates, so a lot of good [stuff] from [him] tonight.”

Kevin Durant, still visibly frustrated about the loss when he faced the media postgame, kept his comments short when asked about Simmons’ play.

“That’s the stuff that we expected from [Simmons]. Not surprising. If you’re out there and playing, I assume that you’re physically fine.”

The Nets need the All-Star version of Simmons, especially with the uncertainty of Kyrie Irving’s status. Simmons took a step in the right direction Tuesday night. It remains to be seen if this becomes the start of his turnaround or just another tease that could lead to more frustrations.