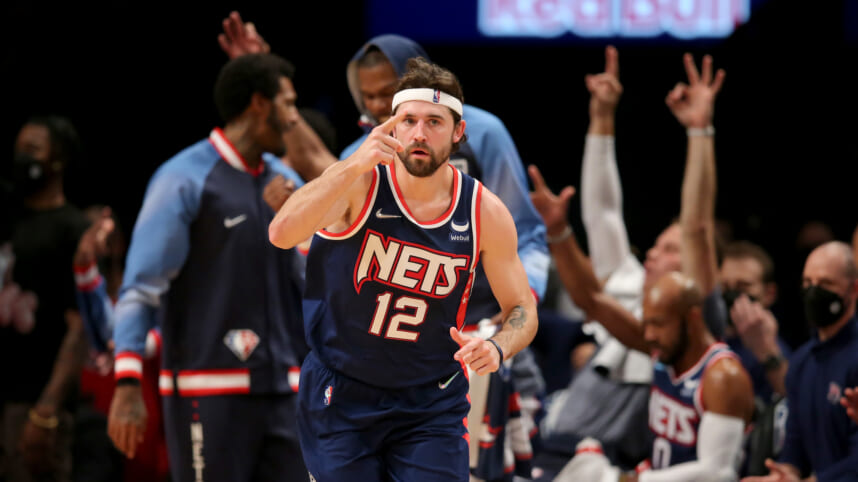 The Brooklyn Nets will open the NBA regular season on Wednesday against the New Orleans Pelicans without their top two shooters — Joe Harris and Seth Curry.

While it’s not a cause of concern for now for Nets coach Steve Nash, Harris, in particular, is anxious to return after missing the team’s final three preseason games.

Harris has been dealing with foot soreness since the Nets’ preseason opener, while Curry is still recovering from his left ankle injury.

The 31-year-old Harris played only 14 games for the Nets last season.

After dealing with two ankle surgeries, he was primed for return. He did, but for only a brief 15-minute appearance, against the Philadelphia 76ers on Oct. 3. The former NBA 3-point champion was rusty, air balling his first three-point attempt. He wound up with six points on 2 of 7 shooting from behind the arc. Then he experienced soreness on his left foot, causing him to miss time. But he insisted it was more of a precautionary measure rather than a setback.

“I was reaching the end of my initial rehab timeline, and it’s kind of one of those things where the intensity goes up from open gym to practice, and from practice to the preseason games. It’s really more about my body just kind of building up a tolerance just for playing higher intensity loads.”

Nets coach Steve Nash was on board. And judging by how they played in their final two preseason games, it might be best to rest Harris and Curry until they are fully healthy.

“I’m not concerned. I’m positive. I’m optimistic. It’s just not straightforward with guys coming off surgeries, assimilating back to play. It’s not always like straight up. Sometimes you go through some adaptation issues. So I think those guys are facing that more than, ‘Oh, the emergency lights are on and we’re concerned.’ I think we feel like this is just a part of them getting back to it.”

Harris’ absence opened up the starting spot for newcomer Royce O’Neale. The 3-and-D wing whom the Nets acquired from the Utah Jazz for a first-round pick is coming off his best game in Nets uniform. O’Neale stuffed the stats sheet with 11 points, seven rebounds, two assists and three steals in the Nets’ 112-102 win over the Minnesota Timberwolves to wrap up the preseason. More importantly, he was a plus-19. Only Nets starting center Nic Claxton had a better net rating (plus-20) in that game.

As O’Neale is starting to get into the Nets’ groove of things, Harris remains hopeful he could return soon. But there’s one caveat.

“I’m hoping to be back here pretty soon, full go. But even when I am, I’ll still be at a little bit of a limited capacity.”

It could mean Harris will come off the bench at the start and see how he progresses throughout the season. The veteran shooter is on the third of a four-year, $75 million contract extension. He’s the only remnant of the Nets’ magical 2018-19 playoff run that attracted Kevin Durant and Kyrie Irving to join Brooklyn in the following summer.

After three fruitless seasons since Durant and Irving’s arrival, the pressure is mounting in Brooklyn. Harris understands how pivotal this season is for them as a team. So he’s taking the smart approach.

“It’s a long season, and you definitely want to be at your best at the end, but I’m gonna try and get out there sooner rather than later.”

Ben Simmons’ addition has changed the Nets’ dynamics. His two-way versatility has given the Nets a weapon they never had in the Durant-Irving era. Simmons is one of the best, if not the best, in manufacturing three-pointers for his teammates. Harris is expected to get plenty of wide-open looks that will come in handy for the Nets in late May and June next year. But he can’t hit if he isn’t available.