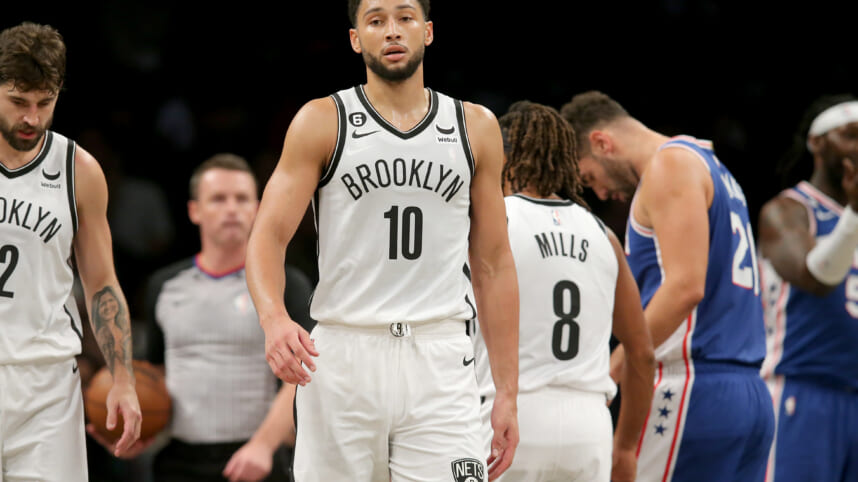 Ben Simmons has not found his groove yet with the Brooklyn Nets since his return from a long 470-day layoff.

Simmons is back in street clothes again, missing the Nets’ last two games with left knee soreness this time.

On Wednesday, Ian Begley of SNY reported that Simmons’ name came up when the Nets were having cursory talks with a Western Conference team for a veteran shooter. Begley noted the conversations occurred before the Nets’ embarrassing home loss to Indiana, which hastened Nash’s exit.

Based on Nets GM Sean Marks’ remarks following Nash’s dismissal, it is clear that the team is still very much invested in the current group.

“Well, I think we would not have made moves like this, at this juncture if we didn’t think [we still have a title window]. …My job here is to put this team, this organization in the best possible place to succeed not only now, but long term. We don’t want to skip steps, we’re going to fast track it here. But we do realize, I’m going to be honest, we have a [title] window here. And when we have these, this group of players and and this salary cap and and where we are, we hope to achieve that, and I think we’ve all seen what’s happened over the course of the last few years. There’s been plenty of teams that, at one point, look a certain way and make some moves, and they change. And that’s what we hope — to rise as one of those teams.”

But if the Nets are looking to upgrade the roster, they have limited assets to do so. Obviously, Kevin Durant is their biggest trade chip, but as it turned out last summer, no team can approximate his value. And besides, Nash’s exit only meant the Nets are doing everything to keep Durant from demanding another trade.

So after Durant, there’s not much else they can dangle to get a quality piece in return that will enhance their volatile title window. Irving’s trade market was already zero, even before the latest firestorm he’s currently in. So naturally, Simmons is their next best trade chip, even though his value took a hit since his messy exit in Philadelphia.

But the reports of Ime Udoka as the likely successor of Nash should boost Simmons’ confidence. Udoka’s defensive switching schemes are ideally suited to Simmons’ strengths. On top of that, the two have forged a connection during the 2019-20 season when Udoka was brought in as defensive coordinator and bridge the age gap between former Sixers coach Brett Brown and the franchise’s stars Joel Embiid and Simmons.