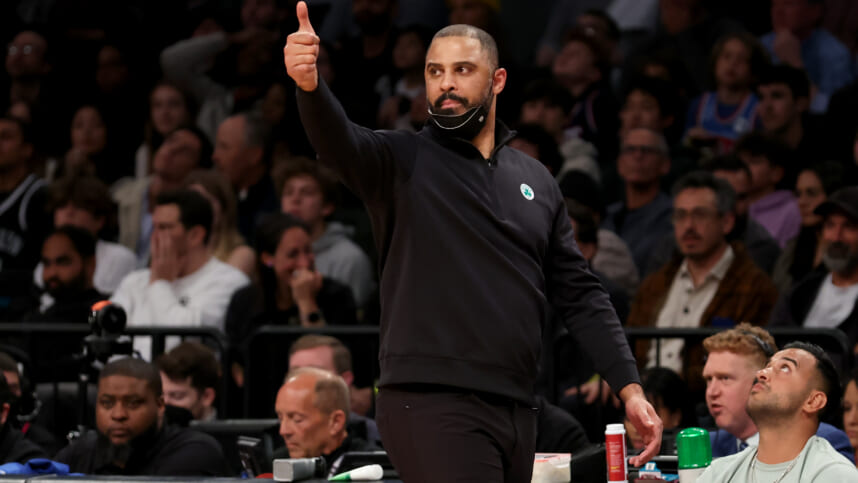 Apr 25, 2022; Brooklyn, New York, USA; Boston Celtics head coach Ime Udoka coaches against the Brooklyn Nets during the fourth quarter of game four of the first round of the 2022 NBA playoffs at Barclays Center. The Celtics defeated the Nets 116-112 to win the best of seven series 4-0. Mandatory Credit: Brad Penner-USA TODAY Sports

As it turns out, the Brooklyn Nets are moving fast from Steve Nash.

The Nets are reportedly zeroing in on Boston Celtics’ suspended coach Ime Udoka as the likely successor of Nash.

The Celtics have suspended Udoka for one year following an investigation into his misconduct with a female subordinate in the organization. But the Celtics are letting Udoka leave for another job, according to ESPN’s Adrian Wojnarowski.

Udoka beat Nash and the Nets in the first round of the playoffs as he guided the Celtics to a finals appearance in his rookie year as head coach.

Previously, he was the Nets’ defensive coordinator under Nash in his first year in Brooklyn.

Durant doubted the Nets’ ability to win a championship under Nash’s leadership when he sought a trade in the summer. He asked Nets owner Joe Tsai to choose between him and Nash and general manager Sean Marks’ ouster. Those doubts lingered throughout the Nets’ 2-5 start.

Udoka is expected to refurbish the Nets’ league-worst defense with his famous switching defense that worked well in Boston. He also has no qualms about holding star players accountable, which was evident in the Celtics’ massive turnaround from a poor start to a Finals run last season.

Long-time Nets assistant coach Jacque Vaughn will be the acting head coach Tuesday night when the Nets host the Chicago Bulls. But Udoka could come in as early as their next game on Friday in the nation’s capital against the Washington Wizards.