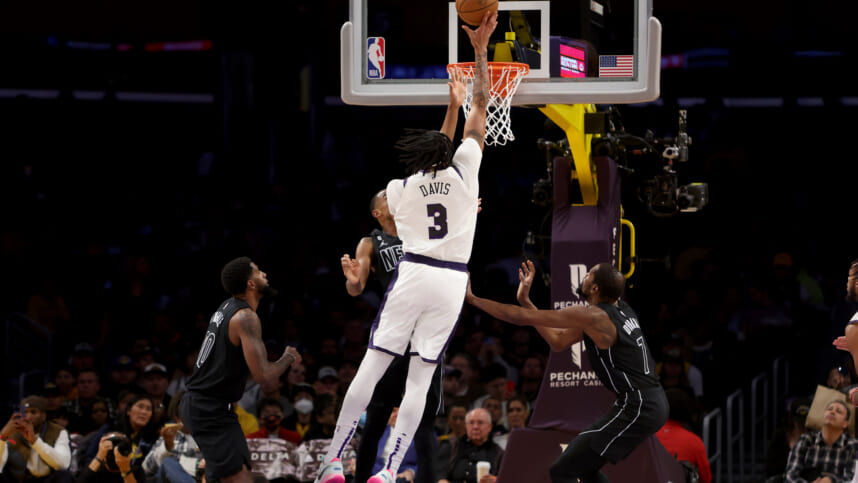 The Brooklyn Nets have made a giant leap defensively under Jacque Vaughn. But on Sunday night, they were reminded again of the sizable gap they must close to become true contenders.

Anthony Davis posed the same giant problem they encountered against the Milwaukee Bucks and Giannis Antetokounmpo (43 points, 14 rebounds) earlier in the season.

Not even the coaching switch from Steve Nash to Vaughn could solve their woes against teams with size.

Davis produced 37 points and 18 rebounds as the LeBron James-less Los Angeles Lakers beat the Nets, 116-103, dropping them to 4-3 since the coaching change.

“We just played in spirts [Sunday night]. It was a perfect storm for them. They made a lot of shots and got to the rim. The AD [Anthony Davis] pick-and-roll was tough to stop tonight, but I like how we fought.”

It did not help that Nets’ starting center Nic Claxton went out with still 8:32 left in the third quarter due to a left eye contusion. Davis already had 22 points, and the Lakers were leading by a dozen when Claxton went down with the injury.

Ben Simmons and Seth Curry also sat out on the second night of a back-to-back schedule for the Nets, while Kyrie Irving missed his sixth straight game. Yet none of them (unless Simmons reclaim his All-Defensive Team form) project to have the antidote for the Davises, Antetokounmpos, Jokics and Embiids of the world.

Earlier, Dwight Howard, who helped the Lakers win the Orlando Bubble championship in 2020, revealed that he was shunned by the Nets in the offseason because they were looking for a big man who could shoot.

Among the remaining free agent centers, DeMarcus Cousins could be the Nets’ best bet.

Cousins averaged two 3s per game on above 35 percent accuracy during his two seasons in New Orleans next to Davis, showing he could thrive given the right fit.

Cousins played for 31 games last season in Denver, backing up Jokic. He averaged 8.9 points and 5.5 rebounds in 14 minutes off the bench. His size and physicality could allow the Nets to go big against supersized frontlines.

While Cousins’ volatile past has kept him out of the NBA, Vaughn has the right temperament to handle him with his culture of accountability.

At this point, Cousins said he’s willing to do whatever it takes to return to the NBA.

The Nets have already gambled with a combustible roster. Cousins projects to be a high-risk/high-reward player. Are they willing to take more risks and go all-in this season?