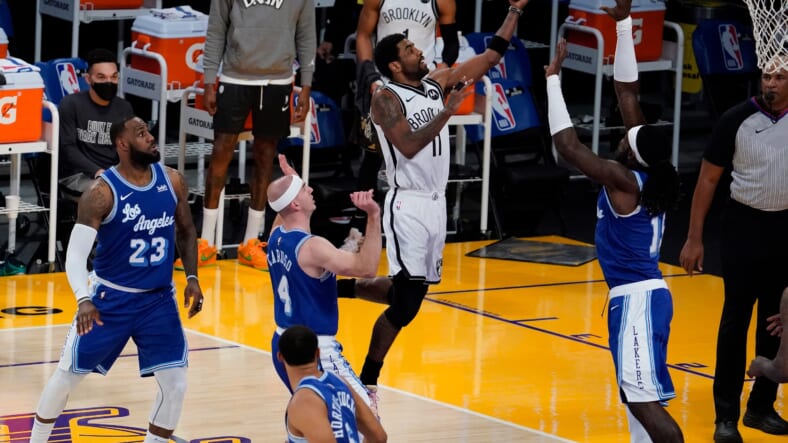 After Jaylen Brown, it was LeBron James’ turn to go after the Brooklyn Nets for what they felt were excessive requirements for Kyrie Irving.

James, who earlier condemned Irving’s actions, said Thursday that Irving should have been back playing after the controversial Nets star issued a public apology.

“I told you guys that I don’t believe in sharing hurtful information. And I’ll continue to be that way, but Kyrie apologized, and he should be able to play. That’s what I think. It’s that simple. Help him learn, but he should be playing. What he was asked to do to get back on the floor I think is excessive [in my opinion]. He’s not the person that’s being portrayed of him. Anyways back to my rehab session.”

Irving was suspended for at least five games without pay for his repeated refusal to apologize for promoting a film with antisemitic tropes on his Twitter. The Nets and the NBA have given Irving opportunities to apologize and unequivocally say he is not antisemitic but Irving stood his ground in a pair of combative press conference.

Irving only apologized after the Nets announced his suspension via a strong statement saying he is “currently unfit to be associated with the Brooklyn Nets.” He was given a series of requirements before returning.

Irving took an important step earlier this week when he met with the NBA Commissioner Adam Silver in a productive meeting. Nets GM Sean Marks said they have yet to directly talk with Irving since the suspension.

The Nets are 3-1 without Irving, buoyed by the coaching change.

The repercussions of Irving’s latest controversy cost him his deal with Nike.

Brown, his former Boston teammate, said he expects the NBPA to appeal Irving’s case, adding that a lot of players “expressed discomfort” over the Nets’ ‘excessive’ requirements.

As it turned out, James was one them.

The Lakers superstar earlier said he doesn’t condone Irving’s actions which “caused some harm to a lot of people” and called the incident “unfortunate.”

“I believe that what Kyrie did caused some harm to a lot of people. He apologized. But he caused some harm and I think it’s unfortunate. But I don’t stand on the position to harm people when it comes to your voice or your platform or anything. So it doesn’t matter what color your skin is, how tall you are, what position you’re in. If you are promoting or soliciting or saying harmful things to any community that harms people, then I don’t respect it. I don’t condone it.”

If Irving can satisfy the requirements or the Nets lower their conditions, Irving could play as early as Sunday against the Lakers.

James has been dealing with a left abductor strain. His playing status for Friday’s game against Sacramento and the Nets on Sunday remains doubtful.

Meanwhile, the Nets will play their fourth game without Irving on Saturday against the Los Angeles Clippers.