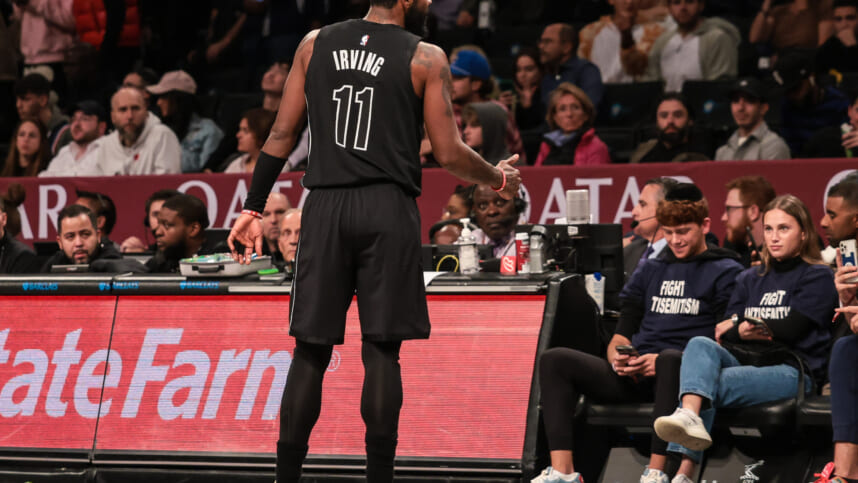 Irving announced the donation in a joint statement with the Nets and the Anti-Defamation League, a non-profit organization that fights all forms of antisemitism and bias, released Wednesday evening.

“I oppose all forms of hatred and oppression and stand strong with communities that are marginalized and impacted every day. I am aware of the negative impact of my post towards the Jewish community and I take responsibility. I do not believe everything said in the documentary was true or reflects my morals and principles. I am a human being learning from all walks of life and I intend to do so with an open mind and a willingness to listen. So from my family and I, we meant no harm to any one group, race or religion of people, and wish to only be a beacon of truth and light.”

The Nets have not made him available to the media since his testy press conference about his controversial post following the Nets’ home loss to the Indiana Pacers last Saturday.

Nets owner Joe Tsai condemned Irving’s post. But unlike the Miami Heat, who suspended Meyers Leonard indefinitely for an antisemitic slur last year, Irving remained on the Nets’ active roster amid a widespread backlash, including from the NBA legends, who called him an “idiot.”

Leonard was also suspended by the NBA for one week and fined $50,000. He was subsequently traded to the Oklahoma City Thunder as a salary filler and never again stepped foot on an NBA court.

The NBA and NBA Players Association, where Irving is the executive vice president, issued statements condemning antisemitism without naming him.

The Nets chose a different approach, gave Irving the benefit of the doubt, and enlightened him through dialogue.

“There is no room for antisemitism, racism, false narratives or misguided attempts to create animosity and hate. Now, more than ever, there is a pressing need to ensure education in these areas. We are putting our prior statements into practice because actions speak louder than words.”

Sam Zussman, CEO of BSE Global, the parent company of the Brooklyn Nets and Barclays Center

Irving, who was reportedly represented by his father and stepmother in the dialogue with the ADL, vowed to work with the non-profit organization along with the Nets “in an effort to develop educational programming that is inclusive and will comprehensively combat all forms of antisemitism and bigotry.”

“At a time when antisemitism has reached historic levels, we know the best way to fight the oldest hatred is to both confront it head-on and also to change hearts and minds. With this partnership, ADL will work with the Nets and Kyrie to open dialogue and increase understanding. At the same time, we will maintain our vigilance and call out the use of anti-Jewish stereotypes and tropes — whatever, whoever, or wherever the source — as we work toward a world without hate.”

During the Nets’ victory in a rematch with the Pacers last Monday, Irving acknowledged a group of Jewish who sat courtside wearing shirts with “Fight Antisemitism” emblazoned on their chest.

On top of their cash donations, the Nets will continue to support and participation in the Shine A Light program, an ongoing initiative dedicated to spotlighting modern-day antisemitism.

The Nets, New York Liberty, and the teams’ different affiliated organizations will also host a series of community conversations at Barclays Center in Brooklyn in partnership with ADL, other national civil rights organizations, and local community associations.

It remains to be seen how much participation Irving will have in these programs.