NBA legends rip Nets star Kyrie Irving for promoting antisemitic film: He should have been suspended 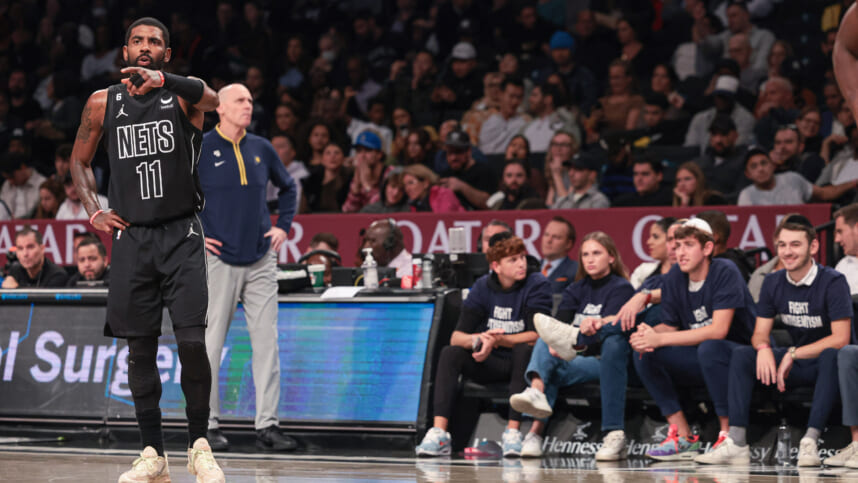 NBA legends Charles Barkley and Shaquille O’Neal called Brooklyn Nets‘ star Kyrie Irving an ‘idiot’ while Reggie Miller is disappointed with the present-day players for not calling him out.

Irving continued to enjoy playing even after doubling down on his promotion of a movie filled with antisemitic tropes.

“I’m not going to stand down on anything that I believe in. I’m only going to get stronger because I’m not alone. I have a whole army around me.”

The post has since been taken down but Irving has yet to issue a public apology.

He continued to remain on the Nets’ active roster.

The Nets’ controversial star point guard was held to a conference-low two points in their 108-99 home loss to the Chicago Bulls Tuesday night and looked disengaged at times. It was not clear if it was because of the backlash he received since the Nets have been coddling him, shutting him down from doing media availabilities until the issue simmers down.

Barkley ripped the NBA for not acting swiftly on Irving.

“I think he should have been suspended. …First of all, Adam [Silver] is a Jewish. You can’t take my $40 million (Irving is set to earn $37 million salary this season) and insult my religion. If you’re gonna insult me, you have the right. But I have the right to say, ‘‘’No, you’re not going to take my $40 million and insult my religion.’ I think the NBA, they made a mistake.”

Charles Barkley via Inside the NBA on TNT

Barkley went on to reference Anthony Edwards incurring a $40,000 fine for a homophobic slur earlier this year. Leonard was fined $50,000 and lost his NBA job and gaming sponsorships for an antisemitic slur despite making a public apology and entering into Jewish programs to make amends.

For Irving, it was just a slap on his wrist.

Nets owner Joe Tsai condemned him via Tweet. The NBA and NBA Players Association, where Irving is the executive vice president, issued statements condemning antisemitism without naming him.

A dialogue between the Nets executives, Irving’s father and stepmother and the Anti-Defamation League, an organization that fights all forms of antisemitism and bias, have been ongoing but without Irving.

And that irked Barkley even more.

O’Neal chimed in and blasts Irving’s unapologetic and insensitive behavior.

“I can tell he’s not conscious — he doesn’t really care what’s going on. It hurts me sometimes when we have to sit up here to talk about stuff that divides the game. Now we got to answer for what this idiot has done. I stand for equality of all people.”

Shaquille O’Neal via Inside the NBA on TNT

Meanwhile, Miller weighed in on the issue with the same tone but from a different perspective.

“The players have dropped the ball on this case when it’s been one of their own. It’s been crickets. And it’s disappointing, because this league has been built on the shoulders of the players being advocates. Right is right and wrong is wrong. And if you’re gonna call out owners, and rightfully so, then you’ve got to call out players as well. You can’t go silent in terms of this for Kyrie Irving. I want to hear the players and their strong opinions as well, just as we heard about Robert Sarver and Donald Sterling.”

It is not the first time Irving has been involved in controversies. He drew flak from his ‘earth is flat’ theory (though he later issued an apology) in 2018. Then his anti-vaccine stance cost him two-thirds of the regular season and in the larger scheme of things, the Nets’ title window last season, and a $100 million-plus contract extension. Before this latest controversy, he was also called out for promoting Alex Jones’ conspiracies to his Instagram.