Tonight Bellator is back and the interim heavyweight title is on the line. In the main event, the promotion will hand an interim title to either Tim Johnson (15-6) or Valentin Moldavsky (10-1).

Bellator already has a heavyweight champion in Ryan Bader (28-6, 1 NC). However, Bader hasn’t defended his heavyweight title since Bellator 226 back in 2019. Bader is currently in the light heavyweight Grand Prix with no ETA on his next heavyweight fight.

With that in mind, the promotion has decided to keep things moving in their heavyweight division. Who would have thought back in 2019 that Tim Johnson would be fighting for a Bellator heavyweight title?

Johnson made his Bellator debut back in 2018 and was knocked out in the first round of his first two fights. However, 2020 was a turnaround year for Johnson. Johnson stopped Tyrell Fortune and Matt Mitrione before getting a rematch with Cheick Kongo.

Kongo had knocked him out in their first fight, but the second fight was much different. At Bellator 248, Johnson picked up a split decision win. With three straight wins, Johnson has been put in this headliner, but he’ll have his hands full tonight.

Standing across from Tim Johnson at Bellator 261 will be Valentin Moldavsky. Moldavsky has been perfect since he joined the promotion. The Russian made his Bellator debut back in 2017. Since then, he’s gone a perfect 5-0.

Moldavsky trains under Fedor Emelianenko and alongside the current Bellator light heavyweight champion Vadim Nemkov. Fedor has built himself quite the team and Moldavsky is looking to become the team’s next world champion.

If you were to ask me two years ago who’d win this Bellator 261 main event, I wouldn’t have given it any thought. I would have said Moldavsky without thinking twice. However, Tim Johnson’s 2020 has made me rethink everything.

He’s shown incredible toughness and grit on his way to winning three fights in a row. However, I don’t think he picks up his fourth tonight. I think we see another Russian champion crowned tonight.

Prediction: Valentin Moldavsky by TKO – Round 3

Bellator is going to crown an interim heavyweight champion. With Ryan Bader competing in the Light Heavyweight Grand Prix, the promotion has decided to create an interim title for the heavyweights.

Bellator announced today that next month Tim Johnson (15-6) will take on Valentin Moldavsky (10-1) for the interim heavyweight title. The matchup will take place at Bellator 261 on June 25th.

Tim Johnson has completely turned his career around. Johnson made his Bellator debut back in 2018 after a stint with the UFC and lost two straight fights by knockout. After those two losses, Johnson took off 2019.

He returned in 2020 and looked like a completely different fighter. He knocked out Tyrone Fortune and Matt Mitrione in the first round. After those two wins, he got a rematch with Cheick Kongo.

Kongo was the first man to face and knock out Johnson in Bellator. However, this time Johnson was able to grind out a split decision. On the heels of these three consecutive victories, Johnson is getting a shot at heavyweight gold.

Standing across from Johnson on June 25th will be the Russian Valentin Moldavsky. Moldavsky is a protégé of the great Fedor Emelianenko and he’s ready to capture his first world championship in Bellator.

Moldavsky made his debut with Bellator back in 2017 after a four-fight stint in Rizin. Since making his debut with the promotion, Moldavsky has been a perfect 5-0 and he got the biggest win of his career in his last fight.

At Bellator 244 in August, Moldavsky took on Roy Nelson. This was also the same night that his teammate Vadim Nemkov dethroned Ryan Bader of his light heavyweight championship.

Moldavsky was able to pickup the unanimous decision victory over the former Ultimate Fighter winner. With that win, Moldavsky has earned him a shot at Bellator 261. With no definitive timeframe on Bader’s heavyweight return, the winner of this matchup could defend the title before unifying down the road with Ryan Bader. 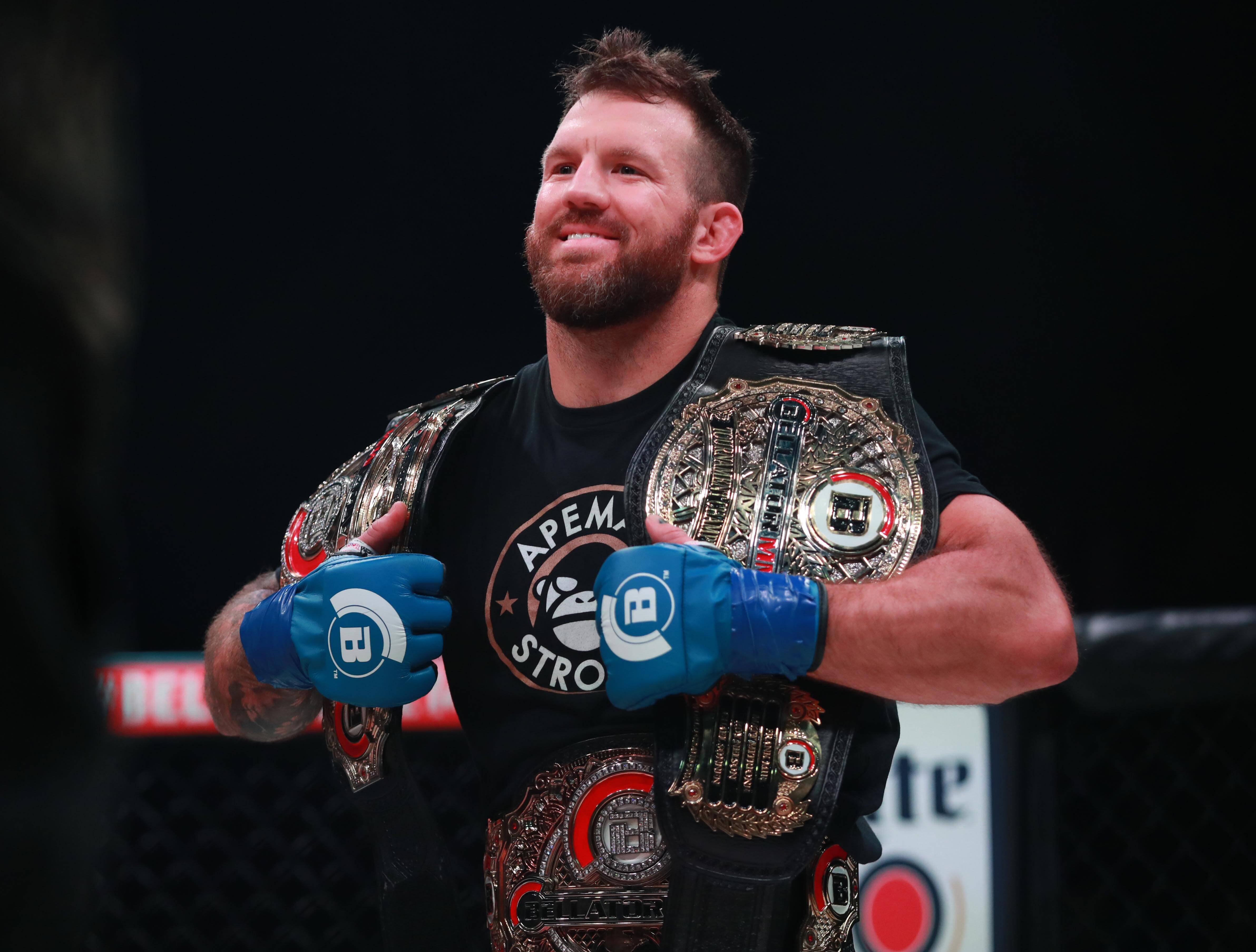 Bellator makes it’s return tomorrow night with another Friday night fight night. In the main event of the evening, double champ, Ryan Bader (27-5), will be defending his light heavyweight crown against Vadim Nemkov (11-2). Let’s take a dive into the four main card fights that will be on the Paramount Network.

Since getting knocked out by Anthony Johnson in the UFC back in early 2016, Ryan Bader has been on an incredible run. He knocked out two straight opponents before jumping to Bellator. Since joining his new promotion, he’s gone 5-0, 1 NC on his way to capturing two titles.

This will be Bader’s first fight back at light heavyweight since 2017 when he kncoked out Linton Vassell in his only title defense. Bader is incredibly strong with very good power and good wrestling. I’m very curious to see how he looks back at 205 pounds.

Vadim Nemkov is no joke. He trains under the great Fedor Emelianenko and he comes into this contest riding a six fight winning streak. He’s 4-0 since joining Bellator with wins over Liam McGeary, Phil Davis, and Rafael Carvalho.

There is really not a spot in the fight where Nemkov won’t be comfortable. He’s got good grappling, he’s got good submissions, and he has solid power. I think this is a very dangerous matchup for Ryan Bader.

The public sees this as an easy Bader win, but the odds are close for a good reason. Nemkov can easily win this, and I’m wondering just how much the cut to 205 will hurt Bader. I think this fight goes the distance and the judges won’t be unanimous, but I think Bader keeps the belt.

In the co-main event of the evening, we see a women’s featherweight contest between Julia Budd (13-3) and Jessy Miele (9-3). Budd is coming off a title loss back at Bellator 238 against Cris Cyborg.

Prior to the Cyborg loss, Budd was completely dominant in the promotion. The former featherweight champion was 7-0 with a few finishes. Budd is a very solid overall fighter, she just got overwhelmed by Cyborg.

In this contest, she will look to get back to a Cyborg rematch. I don’t see an incredibly deep talent pool at 145 in Bellator, but I believe that a rematch between Budd and Cyborg would garner some attention.

Jessy Miele is going to look to spoil the party. Miele is a very solid grappler who comes into this contest riding a four fight winning streak. She won her Bellator debut over Talita Nogueira.

Miele has got to make this an ugly fight. I think she needs to make it a grappling heavy contest and get the better of the positions if she hopes to take it. I think the winner is next in line, and I think ultimately we are going to secure the rematch tomorrow night.

The second fight on the main card pairs “Big Country” Roy Nelson (23-18) against Valentin Moldavsky (9-1). Nelson is looking to turn things around in his Bellator career.

Since making the jump from the UFC, things have not been smooth sailing for Big Country. Nelson is just 1-4 since joining Bellator and that one win came in his debut.

Nelson is still as tough as they come, but he’s just been outworked for the most part. The 44 year old veteran seems to be a one trick pony these days trying to land his signature overhand right. The problem for Nelson is he hasn’t knocked anyone out in four years.

The Fedor protege, Moldavsky, enters the cage tomorrow night riding a four fight winning streak. At 4-0 in the promotion, Moldavsky might only be a win or two away from getting the shot at the heavyweight crown.

Moldavsky has very good overall skills, but really does a good job of using his grappling and good pace to outwork his opponents. I think both of those things are really going to help him here. As long as he avoids that massive right, I think this is pretty easy to predict.

Kicking off the main card is a middleweight matchup between John Salter (17-4) and Andrew Kapel (15-6). Both of these men come into this Bellator middleweight contest riding multiple fight win streaks.

This is your classic striker versus grappler matchup. For Salter, he’s won two straight and he’s 7-1 since joining the promotion back in 2015. Out of his 17 victories, only one of them has gone to the scorecards. Salter is slick on the ground and has nine submissions.

Kapel comes into the fight riding a five fight winning streak that includes his knockout over King Mo Lawal back in November. That knockout came in Kapel’s Bellator debut. Kapel has very smooth striking skills due to his muay thai background. He does have ten submissions, but those are usually setup through hurting his opponents standing.

This is a very good matchup, and I think the winner could be close to a middleweight title shot. I’m going to go with John Salter in this one. I think it’s back and forth, but Salter catches a late submission to secure the win.

Bellator is really starting to pick up some momentum after returning. They have put together a few solid cards and this week they announced some big fights for September. I think this every other week cadence. I think you’ll see Bellator really do some big things the rest of the year.