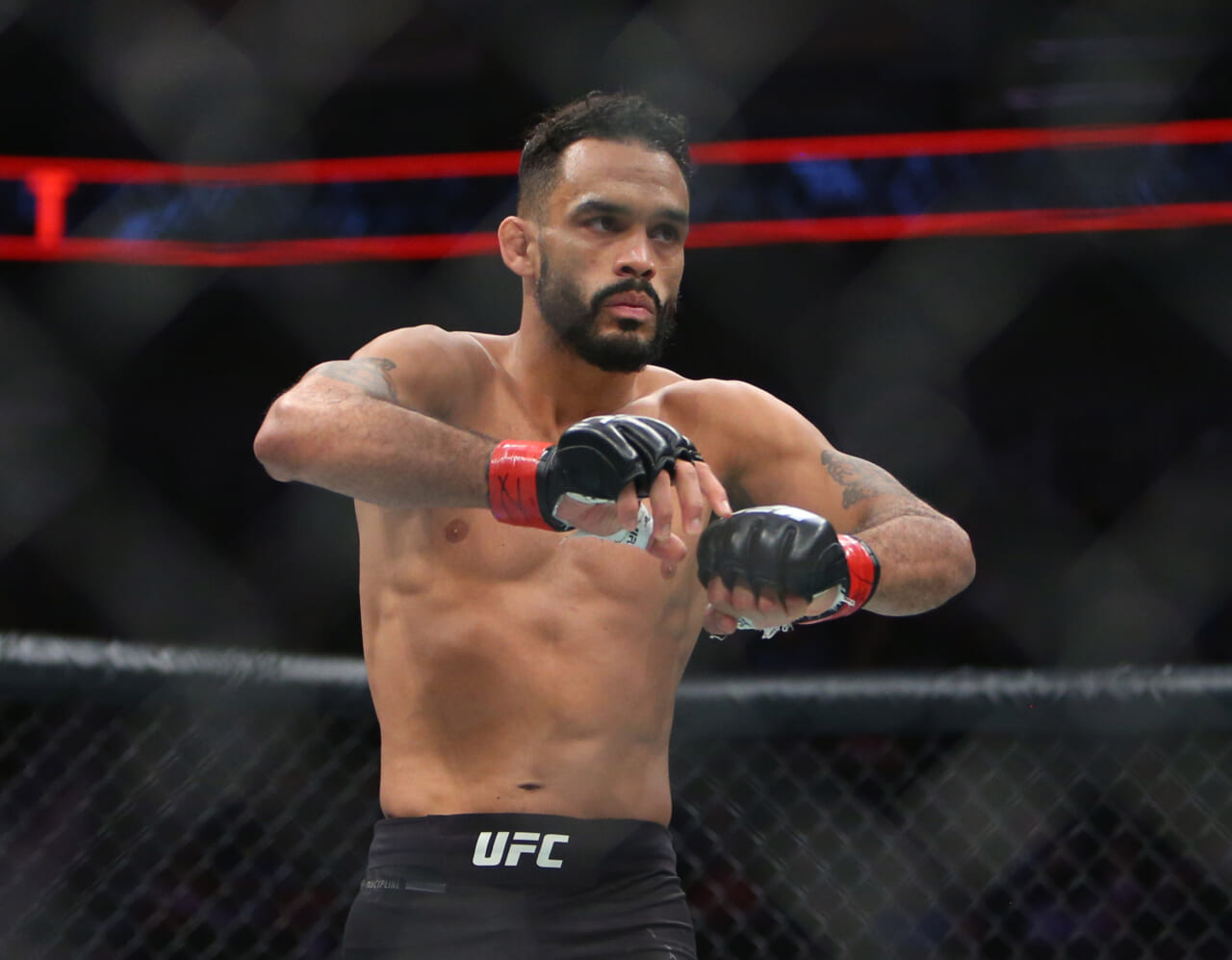 This past Saturday at UFC Vegas 17, Rob Font (18-4) made the walk for the first time in 2020. Font carried a two-fight winning streak into the octagon as he took on former title challenger, Marlon Moraes (23-8-1).

For Font, it’s been a struggle to get back into the octagon. The UFC bantamweight has only fought twice since December of 2018. He’s dealt with a number of injuries and he also dealt with COVID this year.

However, he was finally healthy and ready to go at UFC Vegas 17. Font is really known for his outstanding boxing, but I figured he would have a little trouble with the kicking game of Marlon Moraes.

When the fight started, Moraes actually shot for a takedown on Font. It really gave you an idea of how much Moraes respected the hands of Rob Font. Font was able to work his way up to his feet, and from there Moraes was in trouble.

After the two got back to their feet, Font rocked Moraes within seconds. His hands looked extremely crisp and he wobbled Moraes a few times. A big uppercut put Moraes down for good and gave Font the biggest win of his UFC career.

Font entered UFC Vegas 17 ranked as the 11th bantamweight while Moraes was ranked third. With the performance that he put on Saturday night, I’m expecting Font to jump into the top five when the rankings come out today.

I was incredibly impressed with his performance. After the fight was over, Font called out former UFC bantamweight champion, TJ Dillashaw. Dillashaw’s two-year suspension is up in January and he needs a new opponent.

In reality, it’s a fight that makes a lot of sense especially if Font is ranked in the top five. There are a couple of additional options for Font including Jose Aldo who defeated Chito Vera on Saturday night.Â

Both Font and Aldo called out Dillashaw, but the UFC could pair the two winners against each other. One additional option would be the winning of the Pedro Munhoz – Jimmie Rivera fight which takes place in January. 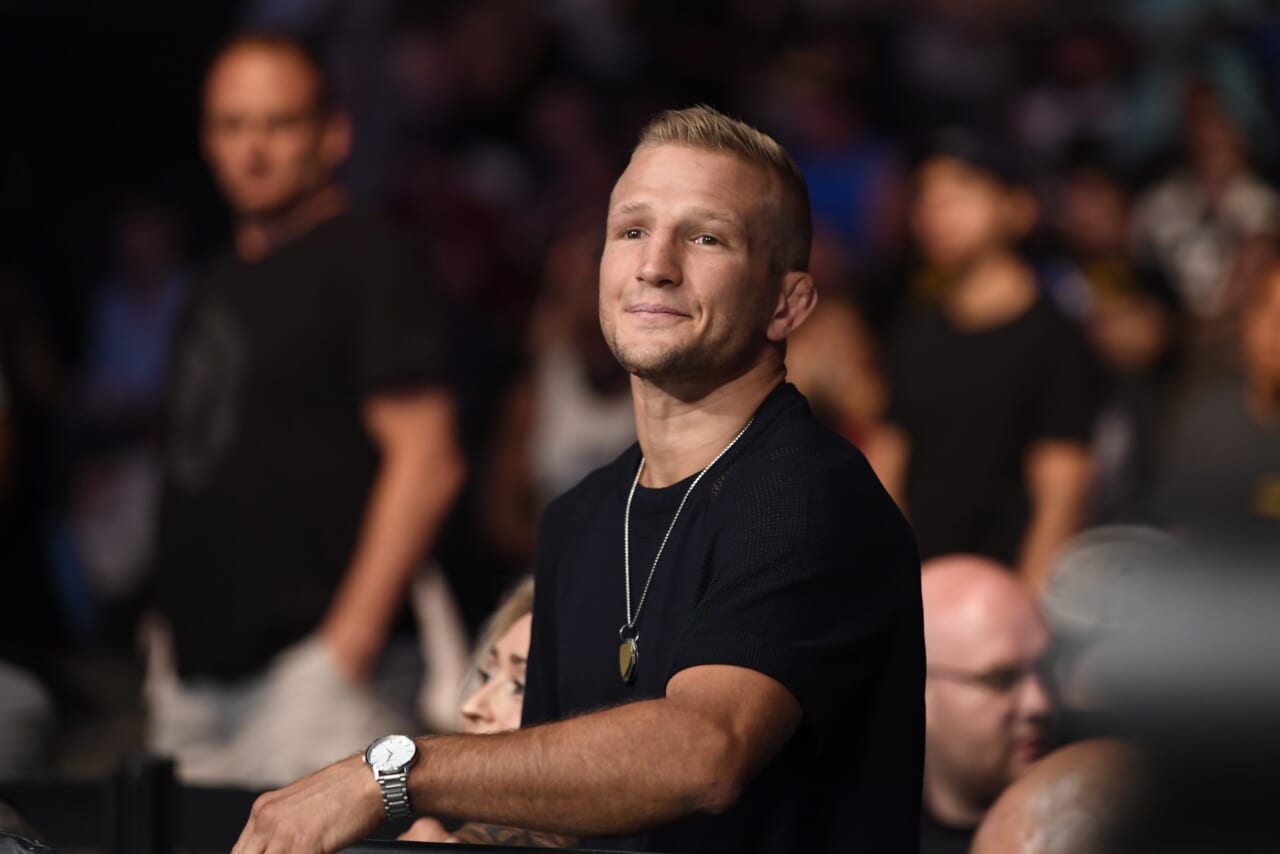 After the fight was over, both men had something in common during their post-fight interviews. Both Rob Font and Jose Aldo called out former UFC bantamweight champion, TJ Dillashaw, after they won their fights.

In all honesty, both of those matchups would make perfect sense for Dillashaw’s UFC return. Dillashaw’s suspension ends next month and he said he’s looking to fight in March. However, he wanted a title shot upon his return to the division.

Given the current timelines, it’s highly unlikely Dillashaw will get that title shot. That being said, the UFC will likely try to give Dillashaw a high profile fight like Jose Aldo when he returns to the division. Dillashaw issues a response to the callouts last night on Twitter.Â

After Aldo called for the fight, Dillashaw said, “I heard everyone is calling me out, cause they all know thatâ€™s my belt.” It’s worth noting that Dillashaw never lost the UFC bantamweight title. He relinquished the belt after he tested positive for EPO.

The last time we saw Dillashaw in the UFC was when he was finished by Henry Cejudo at flyweight in the first minute of their fight. After the fight, Dillashaw popped for EPO and was suspended for two years.

He never lost his UFC title at 135 pounds which is why he was campaigning for an immediate title shot. However, I think the UFC is going to go with the Dominick Cruz route with Dillashaw.

After Cruz was out for a few years with an injury, the promotion gave him top contender, Takeya Mizugaki. This fight was a way for Cruz to get his feet wet in the octagon. He looked incredible in that return bout.

Dillashaw is not going to get an immediate title shot. However, I think the UFC should really attempt to book him against Jose Aldo. Aldo proved last night he’s still one of the best in the world and he’s got a big name.

A matchup between the two former UFC champions makes all the sense in the world. If Dillashaw comes out and dominates Jose Aldo, he will be right back into a title shot trying to get the belt back that he never lost in the cage.

One of the more anticipated matchups on the UFC Vegas 17 main card was the bantamweight matchup between “Magic” Marlon Moraes (23-7-1) and Rob Font (17-4). Font was making his first walk of 2020.

He was entering this fight on a two-fight win streak. A win over Moraes would really put Font on the map in the UFC‘s bantamweight division. However, getting passed Moraes is not an easy task.

Just a couple of years ago, Moraes was looked at as potentially the best bantamweight in the world. Now, he’s coming into UFC Vegas 17 having lost two out of his last three. He was looking to use this fight against Rob Font to get back on track.

The UFC Vegas 17 bantamweight contest got underway with a body kick from Moraes. After landing a second body kick, Moraes shot in for a takedown and took down Rob Font. Moraes tried to transition into a guillotine, but he lost the top position as a result.

Once back on the feet, Moraes was rocked by Rob Font with a couple of shots. Moraes landed a headkick to counter, but Font started putting it on him. Font dropped him with a couple of uppercuts and finished the fight with massive follow up shots.

Huge statement from Rob Font. The UFC’s bantamweight division has a new contender. 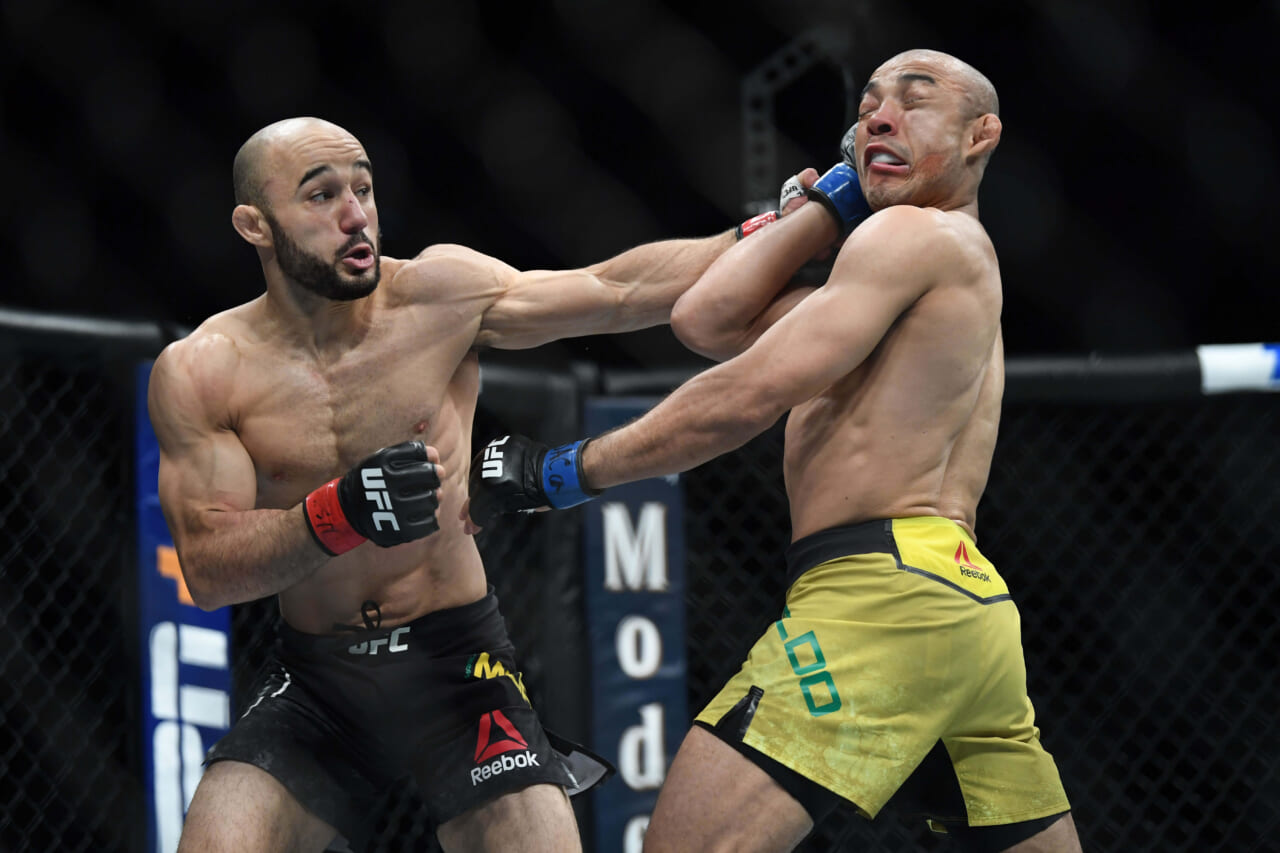 Font will be making his first walk of 2020 tomorrow night. He will enter UFC Vegas 17 on a two-fight winning streak. Those two fights came against Ricky Simon and Sergio Pettis. However, Font hasn’t been very active over the last two years.

This is the third straight December that Font has had a fight. However, in 2019 and 2020, Font didn’t have another fight besides the December matchup. So this is only the third time Font has fought since mid-2018.

UFC Vegas 17 is a massive opportunity for Font. Getting to fight someone inside the top five is big for his career. If he can come out tomorrow and defeat Moraes, he could really set himself up well for a great 2021.

Marlon Moraes is in a very weird spot right now. Before UFC 238, Moraes was looked at as the best bantamweight in the world. He was setup to face Henry Cejudo for the vacant bantamweight title that night. He dominated Cejudo early on.

However, as the fight went on Cejudo didn’t go away. Cejudo ended up breaking Moraes and finishing him in the third round. After that fight, Moraes fought Jose Aldo to split decision. He won, but the general consensus was that he lost.

After that, he was finished the in second round by Cory Sandhagen back in October. In the eyes of most in the MMA world, Moraes has gone from being the best to essentially losing three straight.

UFC Vegas 17 is such an important event for both men. Moraes is looking to bounce back while Font is really looking to break through. We should see the fight take place on the feet tomorrow night.

Many are calling this a fight of the night favorite, and I like the call. Rob Font has some of the best MMA boxing in the business. His hands are very crisp and he’s very slick with his combinations.

Moraes on the other hand has very good striking, but comes at things more while using his kicks. That is going to be really key for him tomorrow night. If he’s going to beat Rob Font, he has to be active with his kicking game.

I think this matchup at UFC Vegas 17 is going to go the distance tomorrow. I believe we will see a striking chess match, but in the end, I like Moraes in this one. I expect him to be very active with kicks to the leg and to the body. In the end, that’ll be enough to secure the decision.

Magic Marlon Moraes (23-7-1) is looking to quickly right the wrong that happened at UFC Fight Island 5. After getting dominated by Cory Sandhagen, Moraes is hopping right back into the saddle taking on Rob Font (17-4) on December 19th.

The fight was first reported by MMA Junkie. Moraes has arguably lost three fights in a row dating back to his title shot at UFC 238. Moraes looked like a world beater before that fight and many believed that he would defeat Henry Cejudo.

Through one round of their fight, it appeared that Moraes would capture UFC gold. However, Cejudo started turning things around in the second round. Entering the third round, Moraes started to fade and Cejudo finished him before the fight got to the fourth round.

From there, Moraes fought and defeated Jose Aldo at UFC 245. However, most people who watch that fight believe that Aldo won the fight. Aldo was actually awarded a title shot despite the judges giving the fight to Moraes. Then of course Marlon was dominated by Sandhagen.

For Rob Font, it will be the first fight for him inside the UFC‘s octagon in 2020. Font is on a two fight winning streak with impressive wins over Sergio Pettis and Ricky Simon. However, Font hasn’t been the most active due to injuries.

This will only be Font’s third fight since December of 2018. If Font is able to win this contest, it would vault him into contention given his winning streak and caliber of victories. If you’re in Moraes’ camp, this fight is truly a do or die situation.

It is important for Moraes to try to get back in the win column quickly. However, if he loses again, you could make the argument that he’s lost four in a row. He wouldn’t be in danger of being cut, but it would be a steep climb back to the top.