The Knicks went 25-16 when Noel took over the starting spot over the injured Robinson. Noel’s career-best 2.2 blocks per game anchored the team’s defense which boasted the league’s best rim protection (60.5 percent in opponent’s rim field goals) that helped them made the playoffs for the first time in eight years. He added 5.1 points and 6.4 rebounds in 24.2 minutes, his most playing time since his sophomore year.

Noel’s efforts got rewarded with the biggest contract yet of his career – a partially guaranteed three-year, $32 million deal to remain with the Knicks. But that contract pales in comparison to what Noel could have earned back in 2017 free agency.

Noel, then a restricted free agent, turned down a $70 million, four-year extension offer from the Dallas Mavericks after super-agent Rich Paul allegedly told him that he was “a $100 million man” during Ben Simmon’s birthday party in 2017. He claimed that Paul induced him to sign the one-year, $4.1 million qualifying offer instead and seek the max contract in 2018 free agency.

Noel’s 2017 fumble remains one of the league’s cautionary tales, and it is the bone of contention in a messy legal battle between the Knicks center and Paul.

The decision to reject the Mavericks’ $70 million offer “placed Noel at serious professional and financial risk,” claimed the 2017 cease and desist letter issued by the legal counsel of Happy Walters, Noel’s previous agent, to Paul and Klutch Sports.

The letter claimed that it was contrary to Walters’ advice alleging that Paul’s motivation was the desire to collect lucrative commissions from a future deal.

It was one of the salacious details of the amended lawsuit Noel filed against his former agent. The move was in response to Paul filing a grievance to the National Basketball Players Association claiming that Noel failed to pay him $200,000 in commission from his previous one-year, $5 million deal with the Knicks in 2019.Â

Noel said in the lawsuit that Paul virtually played no role; hence he is not entitled to his commission. Noel claimed that on the second night of the 2020 free agency, Leon Rose, the Knicks president, called Steven Dorn, Noel’s friend, and adviser. Rose asked Dorn who was Noel’s agent as the Knicks were interested in signing him. Dorn directed Rose to Paul and eventually agreed on the one-year deal that proved to be a smart move that led to his current multi-year contract.

Noel is seeking financial damages after losing $58 million in total salaries between 2017 and 2020, allegedly due to Paul’s lousy advice and gross negligence as his agent. In the lawsuit, Noel claimed that Paul and Klutch Sports have a history of mismanaging and ignoring smaller clients and are only focused on their marquee names citing Norris Cole and Shabazz Muhammad as examples.

Cole had an $8.4 million career earnings in six seasons, while Muhammad collected around $10.5 million in five seasons in the league.

Noel claimed that Paul started to sour on him when he suffered a thumb injury that limited him to a career-low 4.4 points in 30 games during his second season with the Mavericks.

Noel said he entered the free agency with Klutch Sports failing to provide any plan or strategy. He was left with no choice but to sign a two-year minimum deal with the Oklahoma City Thunder.

The former lottery pick claimed that Paul allegedly ignored calls from other teams such as the Philadelphia 76ers (which he learned from his former coach Brett Brown) in 2019 and the Los Angeles Clippers and Houston Rockets in 2020.

In 2019 free agency, the 76ers traded for Al Horford and gave him a partially guaranteed four-year, $109 million deal. They also signed veteran center Kyle O’Quinn to a one-year minimum deal.

Noel signed another minimum deal with the Thunder.

In 2020 free agency, the Clippers signed Serge Ibaka to a two-year, $19 million deal while the Rockets added DeMarcus Cousins for the $2.6 million veteran minimum deal.

The Knicks snagged Noel for a $5 million deal which proved to be a bargain for what he provided last season.

If Noel had stayed with Walters, he would have accepted the Mavericks’ $70 million offer in 2017 and formed an interesting frontcourt tandem with former Knick Kristaps Porzingis. But Paul’s alleged poaching and misrepresentation somehow steered him towards the Knicks. And Noel’s misfortunes finally ended in New York. 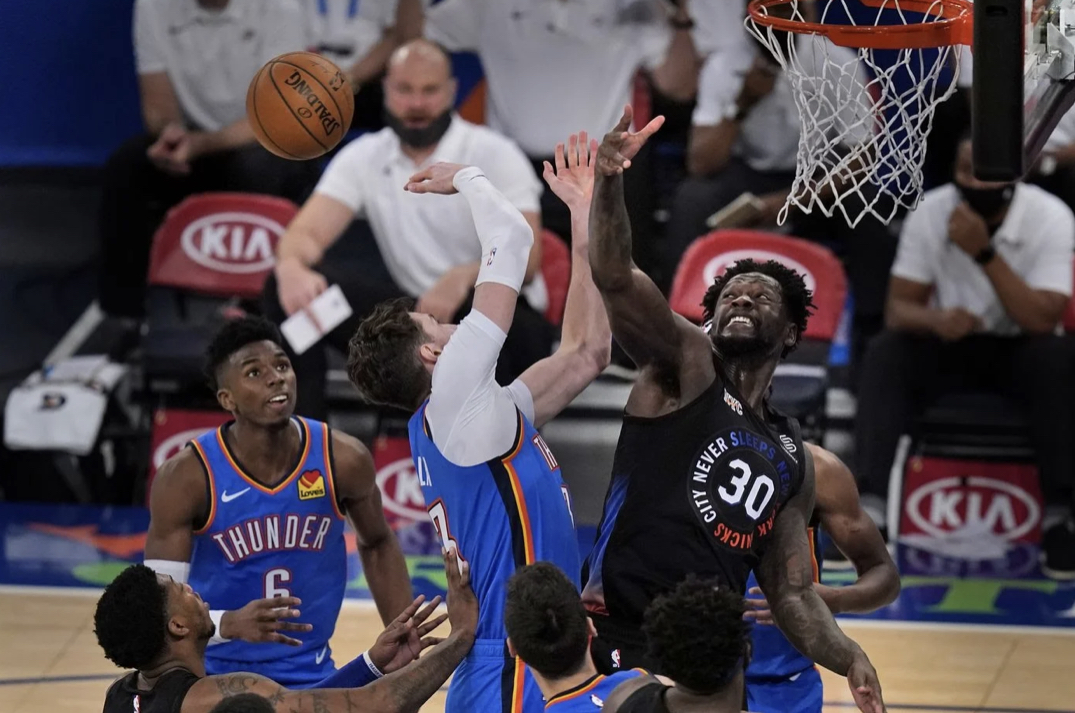 The weight of expectations has slowed down the rampaging New York Knicks.

Following a three-game win streak and a surprising 5-3 start, the Knicks enjoyed the national spotlight. They entered Friday nightâ€™s game against the visiting Oklahoma City Thunder as odds-on favorites for the first time this season.

The result was a disastrous 101-89 loss, a growing pain reminder, as the Thunder caught the Knicks’ defense napping after shaking off a sluggish start.

The Knicks led at the start, but there were ominous signs early on that it would be a long night.

Julius Randle, who is playing like an All-NBA player to start the season, ran into early foul trouble. He was held scoreless in the opening half.

Without Randle, whom Thibodeau referred to as their engine, their offense became stagnant.

The Knicks had only 19 assists and shot just 36 percent from the field.

The Thunder exploited the the Knicks’ woes and took the lead for good in the third quarter.

The Knicks, though, teased another fourth-quarter comeback when Austin Rivers beat the buzzer with a triple to cut the Thunder’s lead to six after 36 minutes of action.

But there were no Rivers heroics nor Knicks comeback this time. Only a hard slap in the face.

“Once we gave up the lead and we got behind, I think we tried to get out of it individually. I think the intentions were good, but we just went about it the wrong way,” Knicks coach Tom Thibodeau said postgame.

Thibodeau pulled out Mitchell Robinson (6 points, 5 rebounds, 2 steals, 3 blocks) in the fourth quarter, who he said was not feeling great. His plan to go small ball and generate some offense backfired as the Thunder repeatedly attacked the paint.

After a horrible 21 percent start from the field, the Thunder took command by shooting 63 percent in the next three quarters.

As the game wore on, the Knicksâ€™ defense continued to loosen up with their every miss.

The pair of Shai Gilgeous-Alexander (25 points, 10 rebounds, 7 assists) and Hamidou Diallo (23 points, 11 rebounds, 2 assists) led the Thunder. They were the better ex-Kentucky players on Friday night at The Garden.

The Knicks’ own Kentucky alumni played sub-par with Randle limited to just 18 points while Kevin Knox (3-9), rookie Immanuel Quickley (1-9), and the returning Nerlens Noel (0-1) struggled to find their rhythm all night. Even RJ Barrett’s shooting struggles from the perimeter continued. He had 19 points on 21 shots.

The Knicks appeared poise to coast to an easy win at home when they built an early 17-7 lead. But the Thunder quickly erased their lead. And the Knicks played with fire.

“In this league, as soon as you start feeling too good about yourself, you’re going to get knocked down,” Thibodeau said.

The Friday night beatdown at The Garden was a cautionary tale for these Knicks after a fairy tale start to this season.

There will be more challenges ahead, far more formidable than this one, but Thibodeau hopes his young team will continue to grow and treat this as a wake-up call.

“From top to bottom, we didn’t get it done. We’re capable of doing much better than we did,” Thibodeau said.

Weâ€™ll soon find out when the Knicks play three games in the next four days, beginning Sunday against the Denver Nuggets, last seasonâ€™s Western Conference finalist. 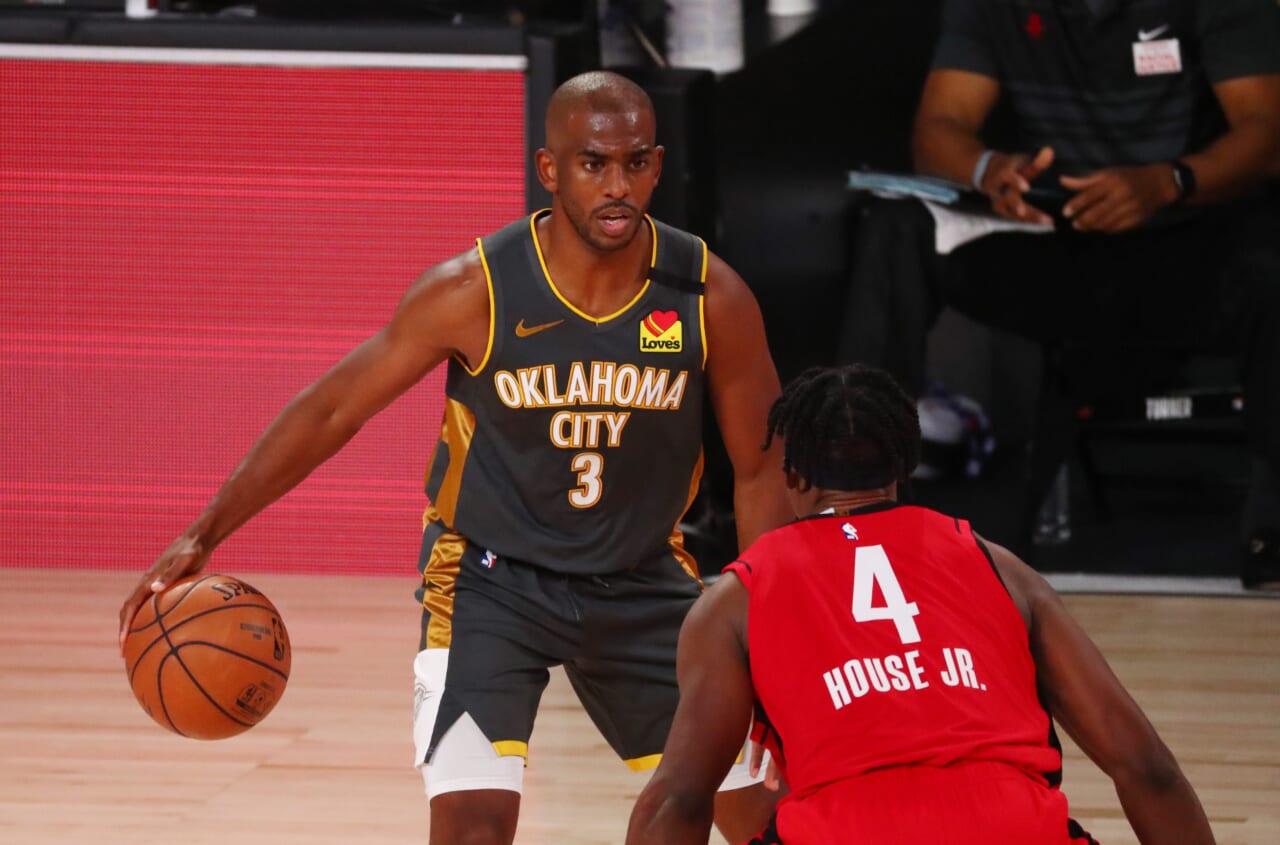 Chris Paul and the New York Knicks have been linked to each other ever since James Dolan hired the Oklahoma City All-Star guard’s former agent at Creative Artists Agency, Leon Rose, as his new team president.

The rumor mill heated up on Monday when Jonathan Macri of the Knicks Film School reported that the 35-year old Paul prefers to wind up his career either in New York or Los Angeles.

“Iâ€™ve been told by a league source that Chris Paul prefers his next basketball home to be either in LA or NY (Los Angeles is where he resides full time) and that has created some modicum of leverage in the ongoing negotiations between the sides. Iâ€™m also told that there is a deal on the table that is comfortable from Sam Prestiâ€™s perspective, and the ball is in Leon Roseâ€™s court,” Macri wrote in his newsletter.

The Thunder is believed to have been shopping Paul since he was acquired from the Houston Rockets a year ago in the Russell Westbrook trade. But league executives thought, at that time, that Paul’s massive contract had been the biggest stumbling block in negotiations.

Even the Knicks reportedly turned down a Houston Rockets’ offer centering on Paul before he was shipped to the Thunder. The Knicks’ stance has since changed upon Rose’s arrival.

Paul is owed $85 million over the next two years — $41 million next season (almost 38 percent of the salary cap if it stays flatly at $109 million) and has a $44 million player option the following year.

The Knicks are one of the only four teams with massive cap space to absorb such a contract.

The Thunder are motivated to unload Paul’s contract after they had the third-highest payroll in the league last season. They have recently parted ways with long-time coach Billy Donovan signaling a rebuilding will soon hit the ground running in Oklahoma.

Ian Begley of SNY earlier reported that the Knicks are willing to absorb undesirable contracts to acquire an asset. Still, Paul, despite his age and massive salary, doesn’t belong in that category, according to ESPN’s Front Office Insider Bobby Marks.

“I see teams having to give up something of value,” Marks told Empire Sports Media. “He’s not a salary dump.”

Presti is banking on Paul’s solid showing last season as leverage in the negotiation table.

Early in September, a rumored trade involving the Knicks’ young players and future picks has been lined up according to Heavy.com’s Scoop B.

Rose and his front office have to think hard about how much they are willing to pay to acquire an All-Star who is about to enter the tail end of his career.