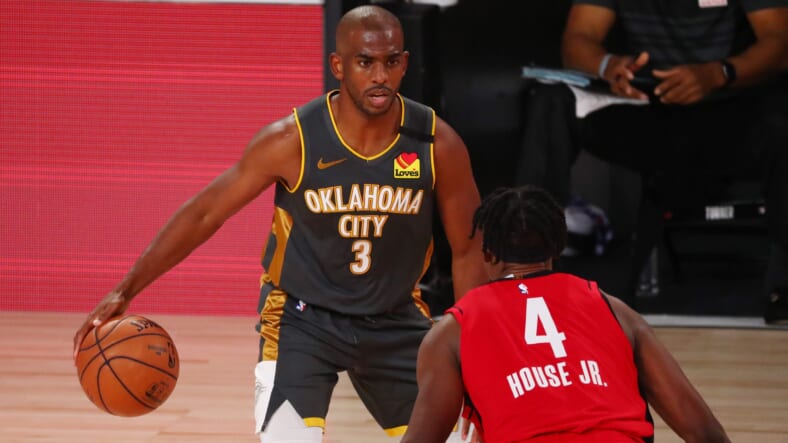 Chris Paul and the New York Knicks have been linked to each other ever since James Dolan hired the Oklahoma City All-Star guard’s former agent at Creative Artists Agency, Leon Rose, as his new team president.

The rumor mill heated up on Monday when Jonathan Macri of the Knicks Film School reported that the 35-year old Paul prefers to wind up his career either in New York or Los Angeles.

“Iâ€™ve been told by a league source that Chris Paul prefers his next basketball home to be either in LA or NY (Los Angeles is where he resides full time) and that has created some modicum of leverage in the ongoing negotiations between the sides. Iâ€™m also told that there is a deal on the table that is comfortable from Sam Prestiâ€™s perspective, and the ball is in Leon Roseâ€™s court,” Macri wrote in his newsletter.

The Thunder is believed to have been shopping Paul since he was acquired from the Houston Rockets a year ago in the Russell Westbrook trade. But league executives thought, at that time, that Paul’s massive contract had been the biggest stumbling block in negotiations.

Even the Knicks reportedly turned down a Houston Rockets’ offer centering on Paul before he was shipped to the Thunder. The Knicks’ stance has since changed upon Rose’s arrival.

Paul is owed $85 million over the next two years — $41 million next season (almost 38 percent of the salary cap if it stays flatly at $109 million) and has a $44 million player option the following year.

The Knicks are one of the only four teams with massive cap space to absorb such a contract.

The Thunder are motivated to unload Paul’s contract after they had the third-highest payroll in the league last season. They have recently parted ways with long-time coach Billy Donovan signaling a rebuilding will soon hit the ground running in Oklahoma.

Ian Begley of SNY earlier reported that the Knicks are willing to absorb undesirable contracts to acquire an asset. Still, Paul, despite his age and massive salary, doesn’t belong in that category, according to ESPN’s Front Office Insider Bobby Marks.

“I see teams having to give up something of value,” Marks told Empire Sports Media. “He’s not a salary dump.”

Presti is banking on Paul’s solid showing last season as leverage in the negotiation table.

[wpdiscuz-feedback id=”ztmweor66e” question=”Will you pull the trigger on this trade?” opened=”0″]Early in September, a rumored trade involving the Knicks’ young players and future picks has been lined up according to Heavy.com’s Scoop B.[/wpdiscuz-feedback]

Rose and his front office have to think hard about how much they are willing to pay to acquire an All-Star who is about to enter the tail end of his career.