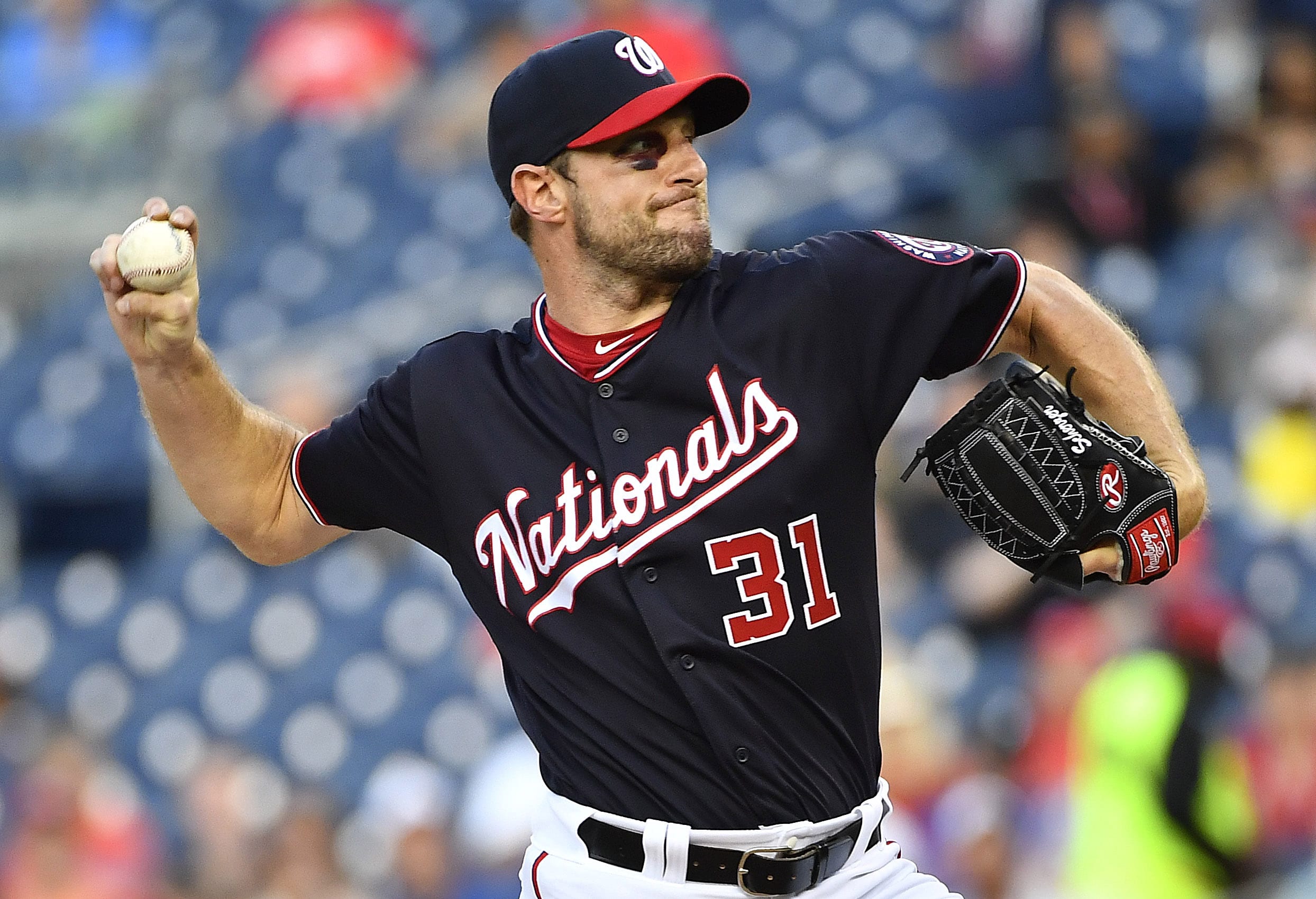 Are the New York Yankees serious about acquiring Max Scherzer?

After reports stated that the Yankees would have to give up a ton of assets to acquire National superstar pitcher Max Scherzer, it’s believed that GM Brian Cashman will do whatever it takes to trade for the building block.

SNY | John Harper: A report from Harper says a source said Brian Cashman will do “whatever it takes” to land Scherzer. The Nationals aren’t keen on letting their star walk without gaining a ton in a potential trade. The cost ultimately might be too much to consider, especially considering he’s a future Hall of Famer.

When considering the return of Aaron Judge and Giancarlo Stanton, the Yankees’ lineup is one of, if not the most intimidating in baseball. The immense talent featured is too much for any team to contain, which makes me believe the Yanks don’t necessarily need to bring in another starting pitcher.

“It has to be one of the most imposing lineups the game has ever seen,” a rival executive SNY on Friday. “Minnesota is having a great year offensively, but nobody can match the Yankees’ firepower from top to bottom, especially with everybody healthy.

However, if Scherzer is deemed to be available, the Bombers won’t hesitate to make a run at the pitcher. He would immediately upgrade the rotation exponentially and become the team’s ace.

When all are healthy, the Yanks have the best teams in baseball hands down. With the trade deadline being July 31, there’s no doubt he will be working tirelessly to bolster the team and provide support to supplement the injured players. Whether or not Scherzer will be a part of a potential deal is yet to be seen. 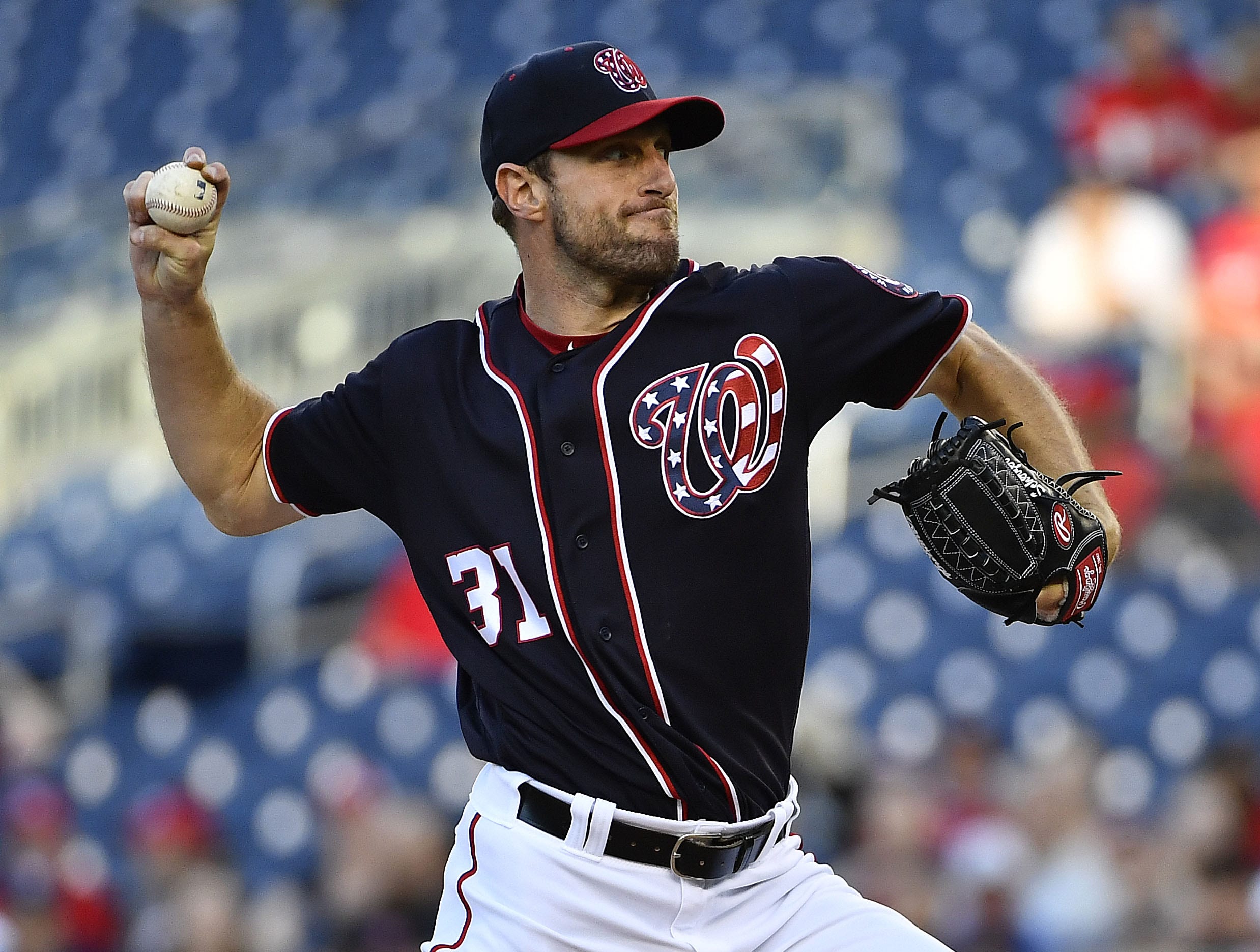 The New York Yankees are in dire need of starting pitching support, which is why they went out and traded for first-baseman Edwin Encarnacion…joking. The need still remains but adding the American League leader in home runs (21) helps bolster the batting order and adds more firepower to a team that’s clearly focusing in power-hitting.

Additionally, plucking a known Yankee killer out of the AL certainly helps. You know what they say if you can’t beat em, buy em. The Yankees often take that quote to the bank…pun intended – they call me butter, cause I’m on a roll.

Anyway, back to the pitching rotation. Rumors have indicated that the Bombers might be interested in Nationals star pitcher, Max Scherzer. The reality of bringing him to the Bronx is next to none, why? Because his price tag would cost general manager Brian Cashman a large fortune.

A deal involving the New York Yankees and Scherzer would be of astronomical proportions:

â€œIf you want to convince the Nationals to trade Max Scherzer you call up Mike Rizzo and offer Gleyber Torres, Clint Frazier, Estevan Florial, Thairo Estrada, and Albert Abreu, then you might be able to get the conversation startedâ€ Jim Bowden on MLB Network Radio

Trading away a team building block isn’t suggested regardless of the assets willing to be exchanged. If the deal would start with Gleyber Torres, it’s not even worth considering.

Torres is a foundational player that will be a significant part of the infield for years to come – he’s untradable. The Yankees need to find a trade partner willing to take on Clint Frazier and minor league prospects. Cameron Maybin holds average value considering his career .255 batting average. He’s having an above-average year with the Yanks, which seems to be a trend if you look at the minimal talent shining beyond our wildest dreams see Gio Urshela for more justification.

Cashman is better off looking elsewhere for pitching support, simply because at some point they will gain back Luis Severino and the starters will be healthy. It’s just a matter of waiting out the injury bug. There should be a short list of players that are considered trade bait, and Frazier should be at the top of it. 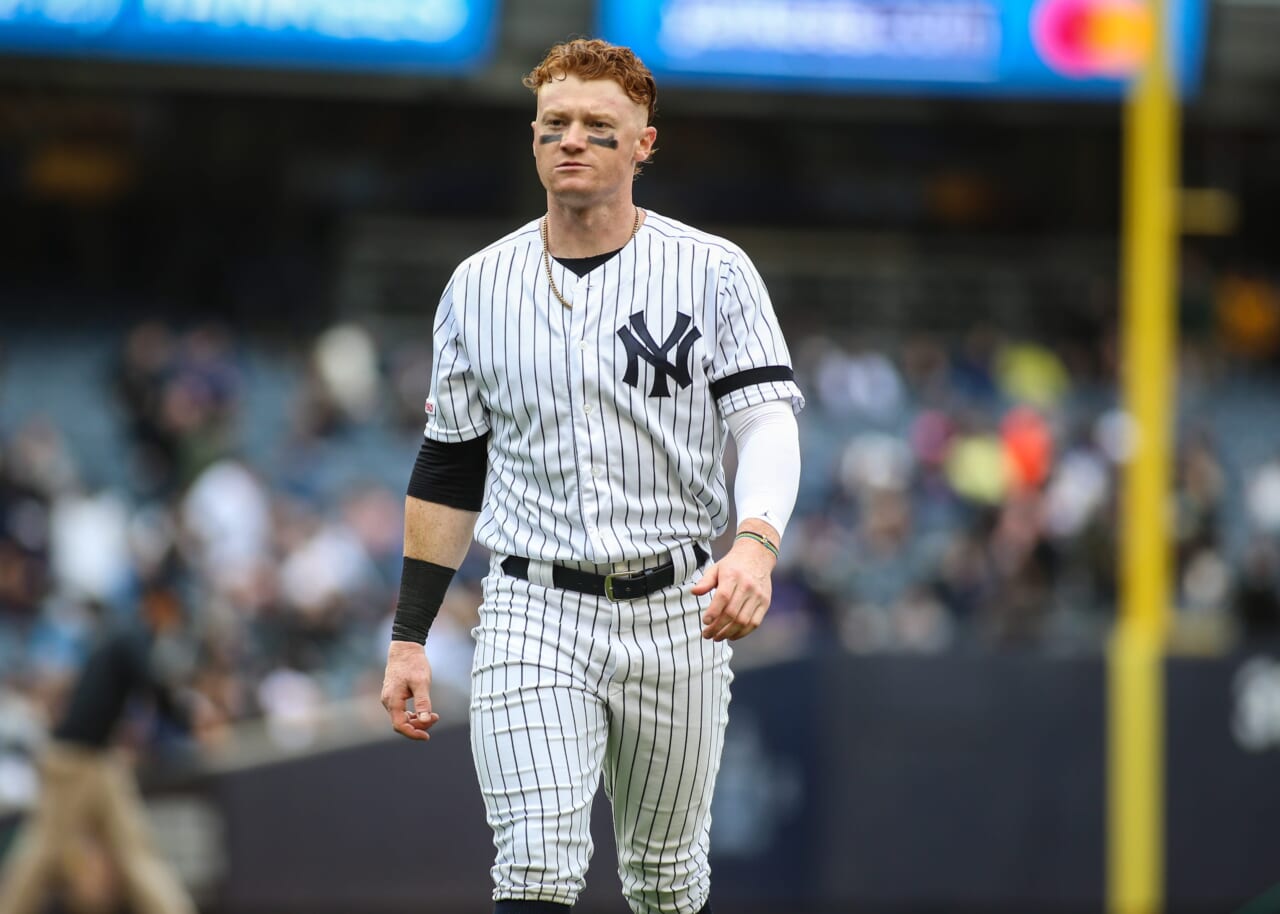 What if I told you the New York Yankees could pick up a 24-year-old outfielder with a .280 ba, on a pace to hit 25-30 home runs and one of the highest batting averages in MLB with runners in scoring position and all they would have to give up is J.A. Happ? It’s a no brainer right? Well, apparently Yankee fans are the scarecrows of MLB fandom because that’s the exact deal they are clamoring to offer other teams.

Clint Frazier is being sent down to AAA to make room for a 36-year-old DH with a bad back who has hit some homers this year and has also struck out a ton. Sweet!!! The best part is the reactions from most fans has been euphoria. They want Frazier traded for the mediocre (Marcus Stroman), the aging out of usefulness (Madison Bumgarner), the injured (Noah Syndergaard) or the pipedream (Max Scherzer).

If you’re ever feeling down and need a laugh to go to any Yankees messageboard and check out the deals people are proposing for Scherzer. ” Stanton, J.A. Happ, Frazier, and a prospect for Scherzer”. The Nationals will be all over Stanton and his huge contract that comes with annual injuries and an aging .500 pitcher in Happ. Anyway, I digress…

So let’s briefly discuss the fanbase’s big issue with Frazier…his defense. Hey, Yankee fans were you aware that Frazier is 3rd in MLB baseball with 5 outfield assists?

Were you aware he is a left fielder and has a perfect fielding percentage there this year? Or that he has made a total of 5 errors his entire career, with 3 of them in RF this year and 2 of them in one rough game? He has always been an ok defender at best, with his bat being his best tool. Finally, do Yankee fans realize that instead of Frazier we are now going to get to watch Giancarlo Stanton stumble around LF like Frankenstein? Someone start polishing the gold glove for him immediately.

Another awesome aspect of this is that either Voit or Stanton are going to be benched and/or out of the line up more often. Also were now counting on Aaron Boone to know when to send in defensive replacements and not end up having Cameron Maybin up with 2 out and the bases loaded in Stanton’s spot. We all feel like we’re in good hands when Boone is making the calls that decide games right? Right.

The Yankees may trade Frazier for some eh starting pitcher and the masses will be happy. Every single starting outfielder for the Yankees has missed huge chunks of this season,Â  and all 3 were hurt last season. So when the next injury comes and Mike Tauchman is killing rally after rally, while Frazier puts up all-star caliber numbers for someone else I hope Yankee fans are as happy with trading him as they seem to be now.

After all, we all wanted Sanchez gone for J.T Realmuto this offseason, and signing D.J Lemahieu was such a dumb move when we could have had Manny Machado. You stay classy Yankee fans. 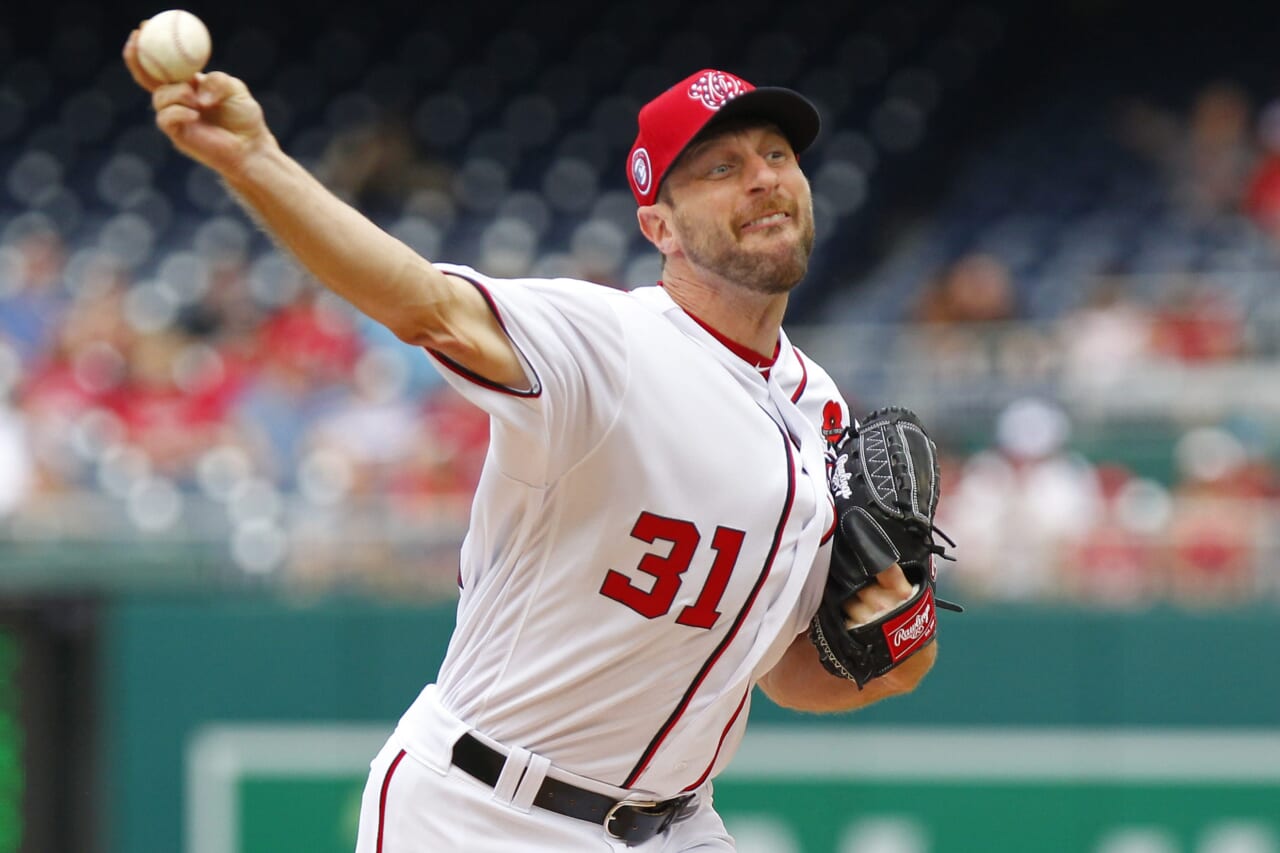 The New York Yankees have a pitching problem, and it’s not just their bullpen that has struggled as of late, it’s the starters as well. Masahiro Tanaka has lost touch of his renowned splitter, James Paxton has been playing through a knee injury, CC Sabathia has inflammation in his knee, and Domingo German was placed on the 10-day injured list.

Again, the Yankees can’t catch a break with the injury bug, and it may force their hand as we approach the trade deadline. Losing out on former Cy Young award winner Dallas Keuchel certainly hurt, but rumors have stated the Bombers might be looking into a potential trade for Nationals star pitcher, Max Scherzer.

Considering the fact that Nationals are sub-.500, it makes sense that they would be open to trading the pitcher. The Yanks have one of the best youth systems in baseball, and they have plenty of resources to push a deal through.

The 12-year veteran is 4-5 on the season but is pitching 2.83 with little run support. Last year, he earned an astounding 18 total wins with a 2.53 ERA. There’s no question he’s a premium talent player, my concern is his price tag.

The Nationals might ask too much from the Yanks for their ace, but it’s coming to a point where the Yankees are losing their leverage as the starting rotation is running thin. It will take several months before the regular starters are back in their normal slots, but it seems as if Brian Cashman believes they can weather the storm.

Theoretically, the Yankees just need to make the playoffs, and they’re seemingly on track at the moment. Not paying top-dollar for a quality pitcher can be justified if they continue to win a majority of games. The problem is – even run support can’t supplement bad pitching at times.