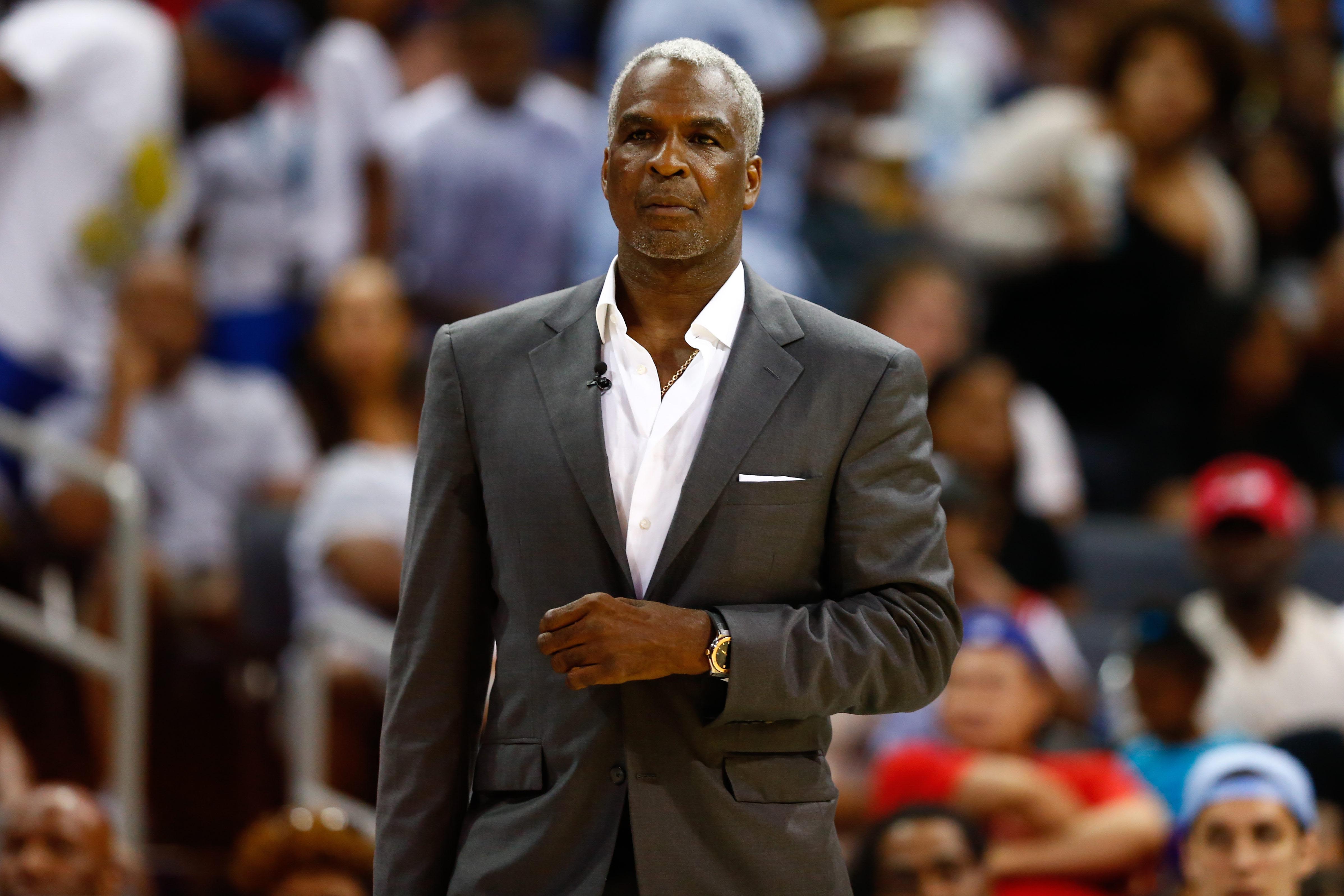 The talent they added will certainly help the success of the team and surpass the 17-win mark. Last season, the roster was built through youth and inexperience, but an influx in veteran talent should give the Knicks a better chance at being competitive.

However, their free agent signing spree has likely come to an end, and it’s time to reflect on the quality of the new players on the roster.

Former Knick, Charles Oakley, gave his opinion on the matter and what grades he would give the signings:

“Do they have an ‘A’ player on this team? I don’t think so,” Oakley told reporters after the Big-3 tournament at the Barclays Center on Sunday. “They maybe got one ‘B’ and a lot of ‘Cs.’”

Failing to lure Kevin Durant and Kyrie Irving to Mecca of basketball surely doesn’t promote the current management or ownership, but it seems as if they never wanted Durant all along due to his injury. Whether or not I believe that is a different story.

Oakley did say in regards to the Nets:

“They hit the Mega Millions and the Powerball,” he said.

James Dolan’s influence on the team surely steered players away that were looking for a safe and fun place to enjoy their prime years. The Knicks always seem to be a whirlwind of drama and unnecessary attention. The fact they managed to pry Morris away from the San Antonio Spurs and Gregg Popovich is mind-blowing. We can cough that up to an extra $5 million on a one-year deal.

Despite the Knicks striking out on big-name free agents, they structured the contracts of their signings very efficiently. A majority of the players are on two-year deals with a team option after the first, allowing them to shed cap allocations and open up space for more influential players.

In the meantime, they will look to be a competitive team in 2019. 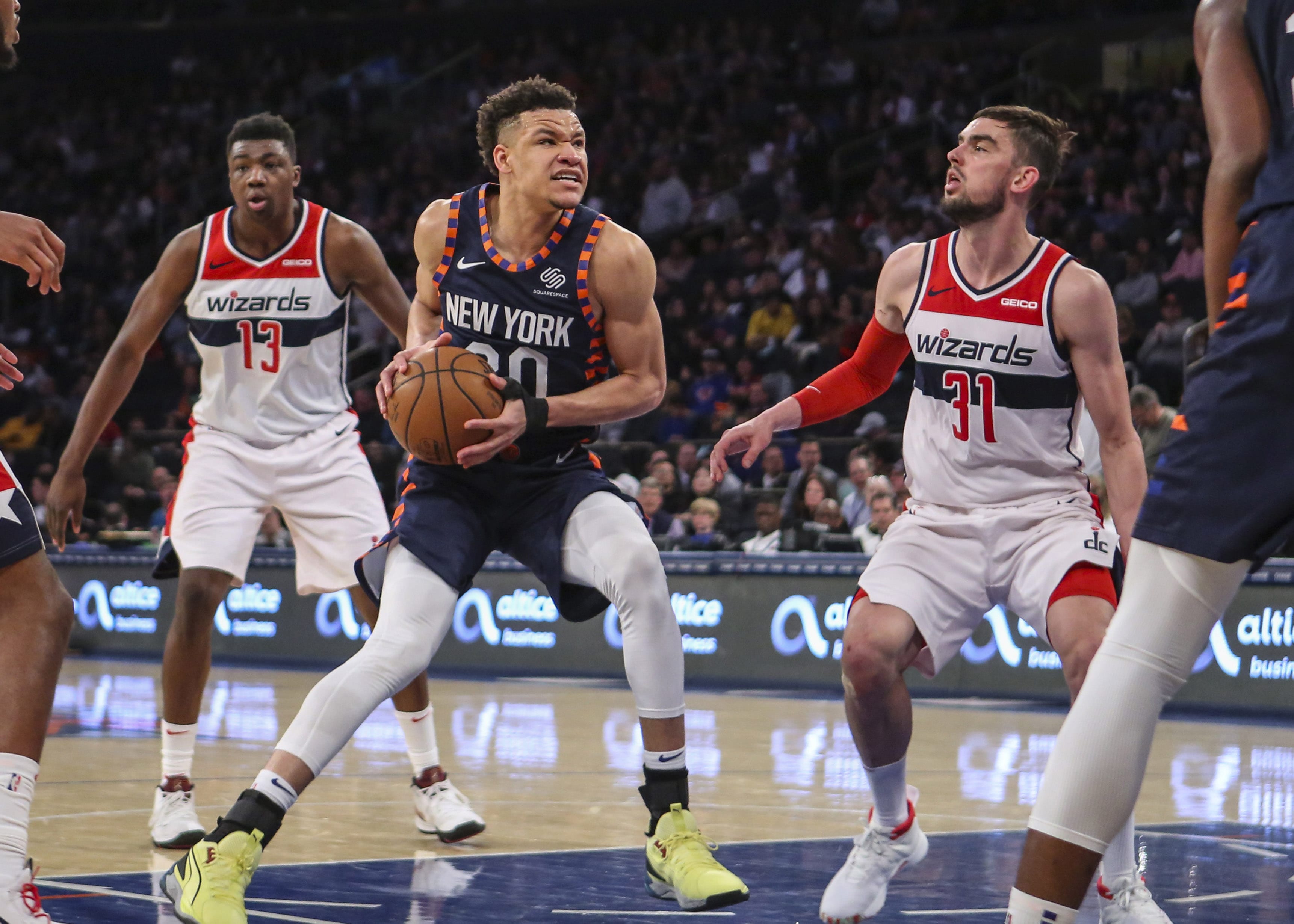 While the New York Knicks made a point to put a team option in the contract of their recent free agent signings (most are on two-year deals), it doesn’t necessarily promote the development of their younger players.

At the position, they now have Knox, Barrett, Morris, Randle, and Portis. Five players, three of which are proven and could steal playing time from younger options, especially Knox.

At this point, it doesn’t seem as if Knox will be a starting player and he might not even be a second-team reserve. Hopefully, they will favor him and allow him to continue growing and refining his skill-set.

Knox averaged 28.8 minutes per game in 2018, and I imagine that number will take a significant dip.

“It’s totally going to be different from last year,’’ Knox stated via the New York Post. “Rookie season, Mitch [Robinson] and Allonzo [Trier] got a lot of good minutes. That’s part of the development stage we were at. This year we got a lot of vets and older guys that will come in looking to play.”

How are the New York Knicks going to approach this position battle?

The Knicks are certainly challenging the former first-round pick to reach his potential and compete with proven athletes. Shooting just 37 percent in 75 games over 57 starts, the 19-year-old will face off against Morris who was signed to a one-year, $14.8 million deal and the exciting Barrett who was the third-overall selection in the most recent draft. Portis is just another quality option that he will have to overcome.

Knox nailed it on the head, though — this is part of his development and competing will ultimately make him a better player. 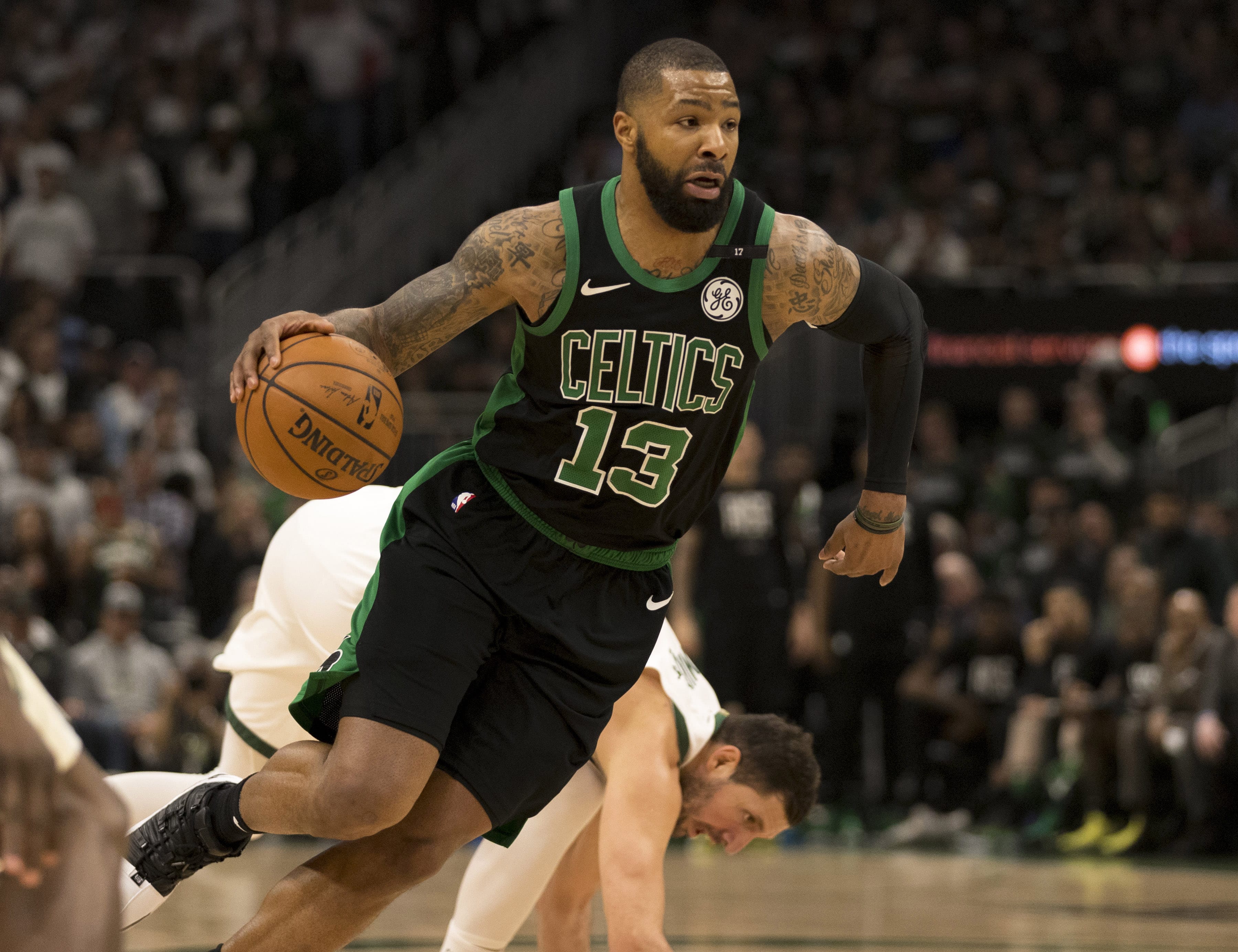 The New York Knicks have made a lowkey splash in free agency this season, stealing a solid playing in Marcus Morris away from the San Antonio Spurs.

As expected now, Morris will sign a one-year deal with New York, per sources. https://t.co/ItulNCc1dn

The Knicks, who brought in a slew of free agents to supplement missing out on superstars Kyrie Irving and Kevin Durant, acquire a very talented power forward in Morris.

It seems as if the Knicks are power forward happy this offseason, bringing in Bobby Portis and drafting RJ Barrett. After re-working Reggie Bullock’s contract after an injury came to surface, the Knicks opened up enough cap space to offer Morris a one-year, $15 million deal.

The Knicks offered Bullock a lesser deal than his original two-year, $21 million contract. Plantar fasciitis was the ailment that lowered the cap-hit and made Marcus a possibility.

The Knicks have been enamored by the former Celtic for quite some time according to reports. The interest in signing him on a more luxurious one-year deal pried him away from the Spurs, who rescinded their offer and signed another free agent after his hesitancy.

Morris’ toughness and ability in the paint will help a young Knicks team succeed in 2019. He averaged 13.9 points and 6.1 rebounds in 75 games (53 starts) last season. He shot a career-best 44.7 percent from the field as well. He will not only be a factor on the court but a de-facto leader for Barrett, Kevin Knox, Mitchell Robinson, and Allonzo Trier. This is a big grab for the Knicks.

Who else have the Knicks signed this offseason? 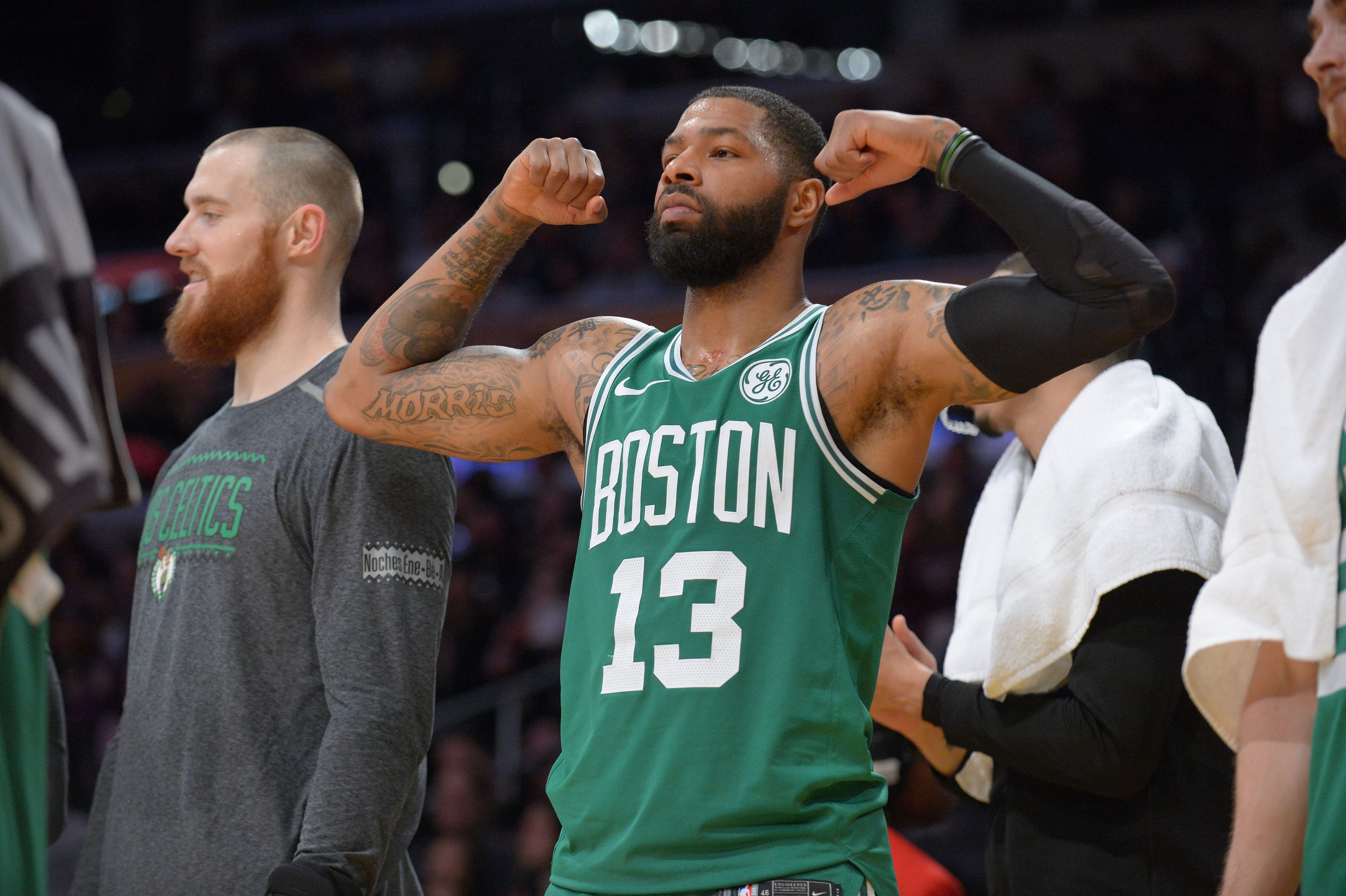 It seems as if the New York Knicks actually do have some pull in free agency, as they’re nearing a deal to pull Marcus Morris away from the San Antonio Spurs after already having an agreement in place.

While Morris is no Kevin Durant or Kyrie Irving, he’s an extremely physical player in the paint and can make an influence for the Knicks in 2019. After restructuring Reggie Bullock’s deal, the team is in a position to offer $15 million-per-year to Morris, a bit more than the Spurs were offering.

While there is optimism that Morris will stick to his original plan of signing with San Antonio, it’s not off the table that he will elect to take his talents to New York.

Last season, he averaged 13.9 points and 6.1 rebounds for the Celtics and his defensive rebound totals per game have been increasing consistently over the past three years.

My question is — will Marcus steal playing time away from the Knicks youth?

I believe that head coach David Fizdale is keen on keeping his youngsters on the court and providing them with ample opportunity to succeed and progress. Of course, RJ Barrett will be a starter along with Mitchell Robinson, Dennis Smith Jr., and Damyean Dotson, but where will Marcus fit in?

The Knicks have gone on a power forward signing spree, but Marcus will likely take playing time away from Bobby Portis down low, which is acceptable. While the forward is efficient in the paint, he’s also a proficient shooter, connecting on 37.5 percent of shots from three-point land.

It’s likely he could pass on the Spurs’ deal of two-years, $20 million in a favor of a one-year, $15 million deal with the Knicks. In fact, if he’s confident in his abilities, there should be no question in coming to the Big Apple.

His skill-set would be a big boost for the team, but I don’t believe it would be enough to help the Knicks to a playoff appearance. They’re simply still too young and don’t have a consistent point guard to lead the offense. There are still too many question marks that need answers and unproven talent. Morris will help, but not that much. 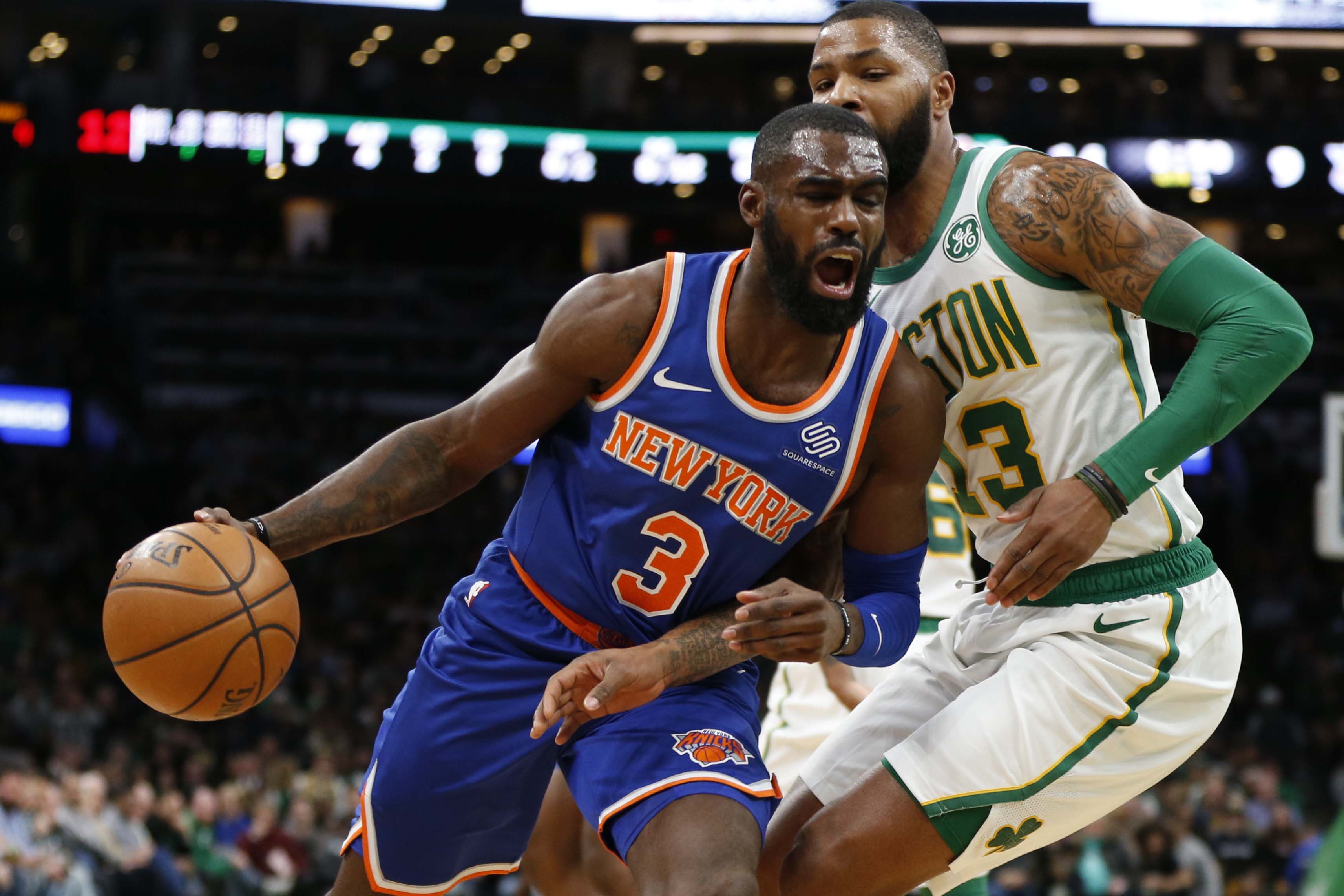 The New York Knicks have been doing some free agent negotiating today.

Reports have surfaced from Adrian Wojnarowski that the Knicks have been re-negotiating with recent free-agent Reggie Bullock.  Bullock and the Knicks are reworking the 2 year, 21 million deal due to Bullock’s ‘fitness to play’ this upcoming season.  Bullock dealt with ankle and neck injures last season.

Both sides have been working well together to make a new deal happen.  Keepin Bullock would be a good addition to the Knicks poor outside shooting.

Another Wojnarowksi report came out shortly after the Bullock news.  Former Boston Celtic, Marcus Morris, is now back on the Knicks radar.  Morris recently agreed to sign with the Spurs for 2 years, 20 million deal.  However, he is now re-considering the Spurs deal to sign with the Knicks.

We have reported early, before the season ended, that Morris was high on the Knicks list.  Morris obtain the final roster spot and he would be another good veteran bruiser.

Morris would be the perfect Knick.  He is a player that is hard-nosed and that does not mind going to battle for his team.  He plays hard and embodies what the ’90s Knicks were all about.  Yes, he has lost a little bit due to age, but the fire is still there.

If Perry can pull off a beautiful re-structure of Bullock’s contract while adding Morris then this off-season would be consider a win for the Knicks, despite some believing it was a giant loss.