Get vaccinated or you can’t watch the second round of the NBA playoffs at The Garden.

That’s the clear message of the New York Knicks to their fans on Friday after Game 5 tickets were again sold out.

The Knicks have split their first two home games, which drew the largest indoor crowds in New York since the pandemic.

Game 1 saw a sold-out 15,000 crowd rocking The Garden, and the Knicks decided to increase the vaccinated sections in Game 2 that attracted 16,254 fans. They are leaning towards filling up The Garden with its total capacity of 19,040 for the second-round home games should they advance past the Atlanta Hawks in their ongoing first-round series.

Games 3 and 4 will be played Friday and Sunday in Atlanta.

“The energy our Knicks fans have brought to the playoffs has been incredible — proving there’s nothing more exciting than Knicks basketball at The Garden. It’s moments like this that shows us what’s possible if everyone gets vaccinated — we’ll all be able to get back to doing what we love — and that definitely includes being together to cheer on the Knicks at Madison Square Garden,” said David Hopkinson, EVP, MSG Sports and President, Team Business Operations, said in a statement.

Fully vaccinated fans comprised 90 percent of the crowd that attended the first two games. Meanwhile, the remaining 10 percent were the socially distanced fans in the unvaccinated section where masks and negative antigen or PCR COVID-19 test were also required. 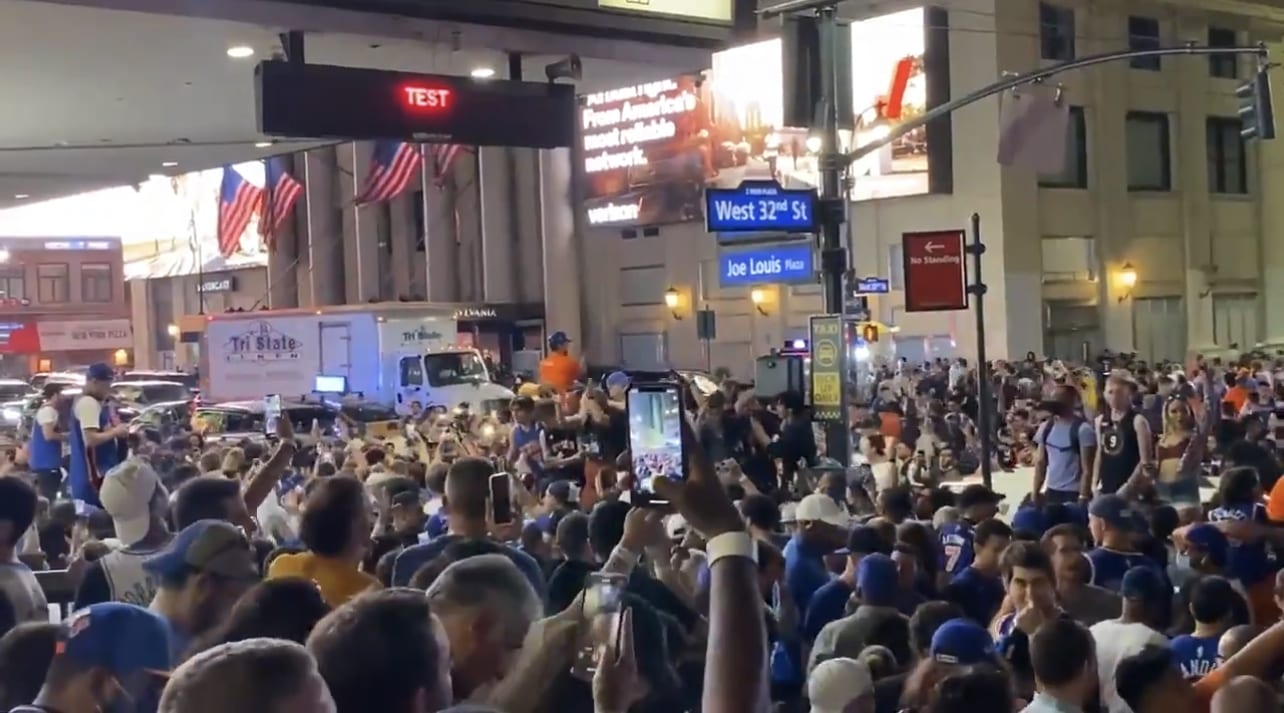 It’s worth the wait.

Just when everything was bleak, in a blink of an eye, the Knicks sprung back to life. And The Garden was Eden once again. A basketball paradise with New York’s long-suffering fans taking a bite on the taste of success.

The Madison Square Garden was rocked to its core after the Knicks pulled off a magical 101-92 comeback win in Game 2 to even the series against the Atlanta Hawks.

Hearing it more and more pic.twitter.com/eUPuwHRuuN

Every Knicks fan is my best friend but Spike is main best friend pic.twitter.com/NhGfstX0As

New York fans filled the streets around The Garden to celebrate the first Knicks playoff victory in eight years — exactly 2,932 days — or since May 16, 2013, when they beat the Pacers in Game 5 of the Eastern Conference semifinals.

OUTSIDE THE GARDEN #knicks pic.twitter.com/Qhzl8KgGFt

Win one playoff game and we don’t know how to act LMFAO pic.twitter.com/bks9pHcyiH

Live view from outside MSG pic.twitter.com/8uayiLaW3q

Scenes from an epic night at MSG. This was the vision for KFTV, to capture these moments and have Knicks fans be heard! Because there’s nobody like us 👊🏾💯.

It’s safe to say that basketball is truly back in the mecca.