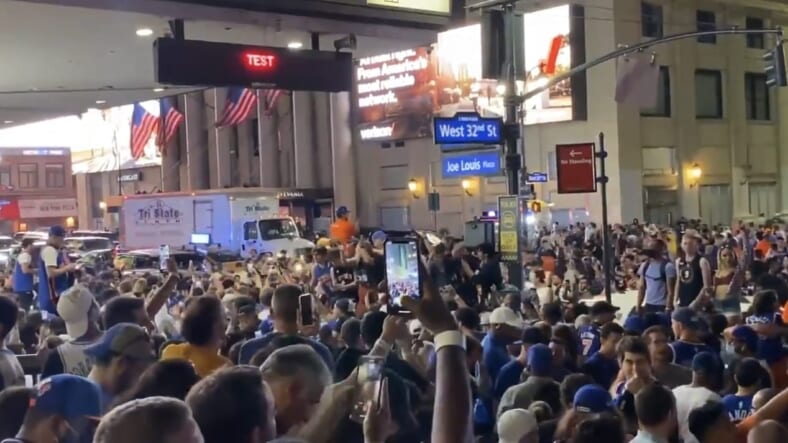 Itâ€™s worth the wait.

Just when everything was bleak, in a blink of an eye, the Knicks sprung back to life. And The Garden was Eden once again. A basketball paradise with New Yorkâ€™s long-suffering fans taking a bite on the taste of success.

The Madison Square Garden was rocked to its core after the Knicks pulled off aÂ magical 101-92 comeback win in Game 2 to even the series against the Atlanta Hawks.

Hearing it more and more pic.twitter.com/eUPuwHRuuN

Every Knicks fan is my best friend but Spike is main best friend pic.twitter.com/NhGfstX0As

New York fans filled the streets around The Garden to celebrate the first Knicks playoff victory in eight years — exactly 2,932 days — or since May 16, 2013, when they beat the Pacers in Game 5 of the Eastern Conference semifinals.

OUTSIDE THE GARDEN #knicks pic.twitter.com/Qhzl8KgGFt

Win one playoff game and we donâ€™t know how to act LMFAO pic.twitter.com/bks9pHcyiH

Live view from outside MSG pic.twitter.com/8uayiLaW3q

Scenes from an epic night at MSG. This was the vision for KFTV, to capture these moments and have Knicks fans be heard! Because there’s nobody like us ðŸ‘ŠðŸ¾ðŸ’¯.

Itâ€™s safe to say that basketball is truly back in the mecca.