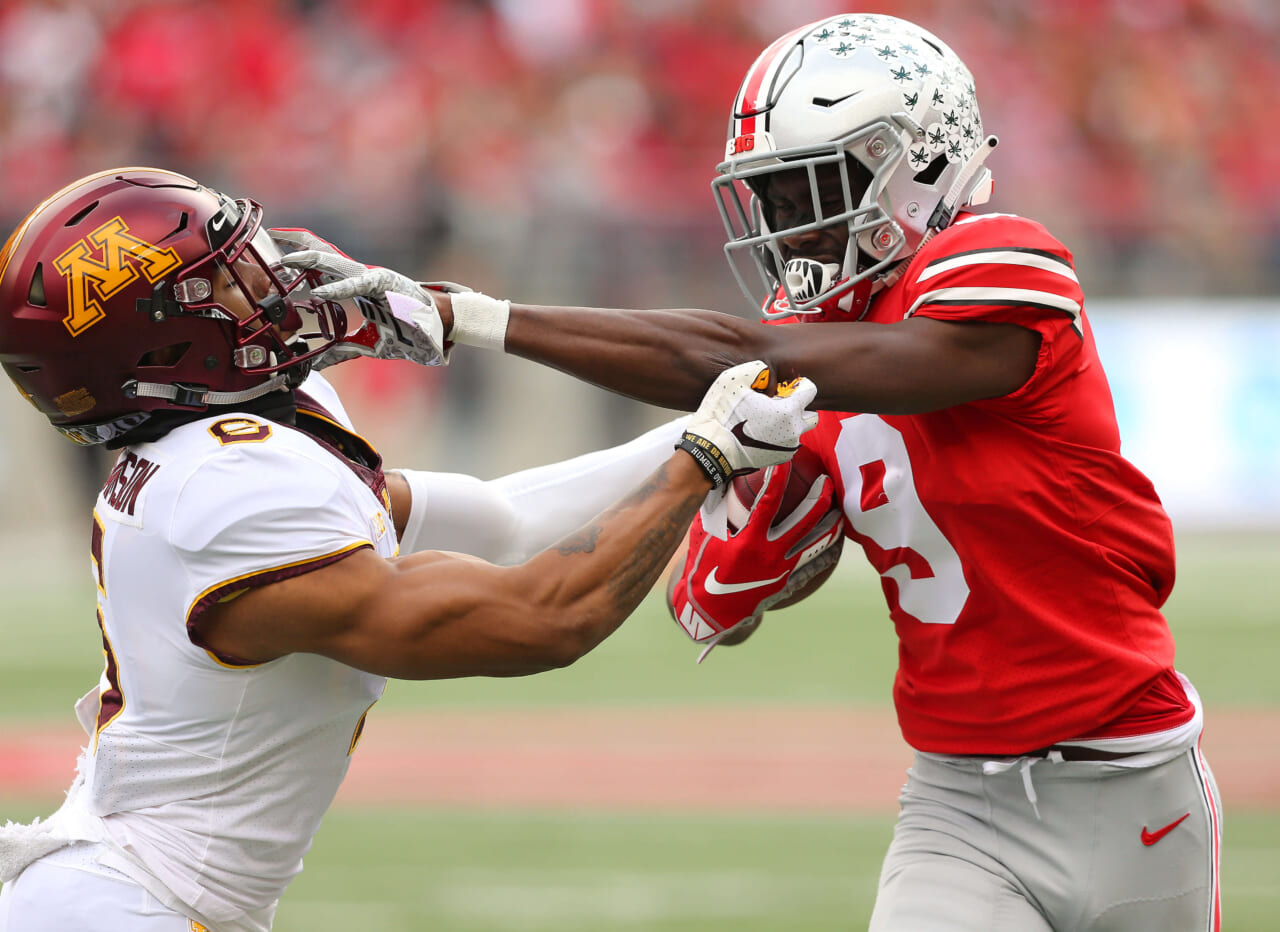 The New York Giants‘ offense needs a top tier receiver to bring the unit to the next level. Back in my day, Plaxico Burress was that guy. He was the go-to guy for all big-time plays. Sadly, all Giants’ fans know the downfall of Burress; he arguably cost the team another Super Bowl run in 2008.

This offseason, the Giants didn’t use any of their drafts picks on receivers, they focused on fixing the offensive line and the secondary. As all fans know, these are the two biggest concerns for the Giants. The offensive line has been bad for too long. However, the Giants added some depth to the receiver depth chart during the undrafted free agency period.

The Giants signed Binjimen Victor, a big body wideout who can be the next Burress. After watching his highlights, I realized he has the skillset and body frame, just like Burress. It gives me chills just thinking about it.

In his first three seasons at Ohio State, Victor never started a game. However, his senior year was a different story, he saw more snaps, and his production grew tremendously. In his senior season, Victor played in 12 games and recorded 573 yards and six touchdowns. This was a breakout season for him, he averaged 16.4 yards per reception. This is why I get goosebumps thinking about him because Victor and Burress are very similar in a lot of areas. In 2007, Burress averaged 14.6 yards per reception.

I think Binjimen Victor can be the next Plaxico Burress.

Standing at 6’4″ and 199 pounds, Victor is a big body receiver just like Burress, who was 6’5″. He may not be the fastest receiver on the field, but is capable of going over the top of defenders for a jump ball and can use his length to layout for overthrown passes. This could be what Daniel Jones needs, a big receiver who can make big-time plays deep downfield.

The Giants’ offense has great slot receivers, but they’re missing a deep threat like Victor. At the combine, he ran a 4.60 40 yard-dash. He has extremely long strides, very similar to Burress. I can see the Giants trying to bulk Victor up a little bit and get him around 215 pounds. I think it would be a huge factor in his game, and he could be a great blocking receiver too at that size.

Currently, Victor will have to battle to make one of the last spots on the team. If the Giants are smart, they sign him and work with him throughout 2020. However, if he doesn’t make the team, he can earn his way up from the practice squad. I can easily see him on the field this season if Engram doesn’t make the move to receiver.

The Giants’ offense will need a big body wideout to complement the slot receivers. For a guy his size, Victor is agile and can beat a cornerback out of his break. He can blow by defenders or just go over the top of them; this is what the Giants need.

His success depends on how he does in the summer training camp and preseason. The only problem for Victor is whether or not this will all go down. There has been an increase of NFL players testing positive for COVID-19. Hopefully, he gets a shot to prove himself.