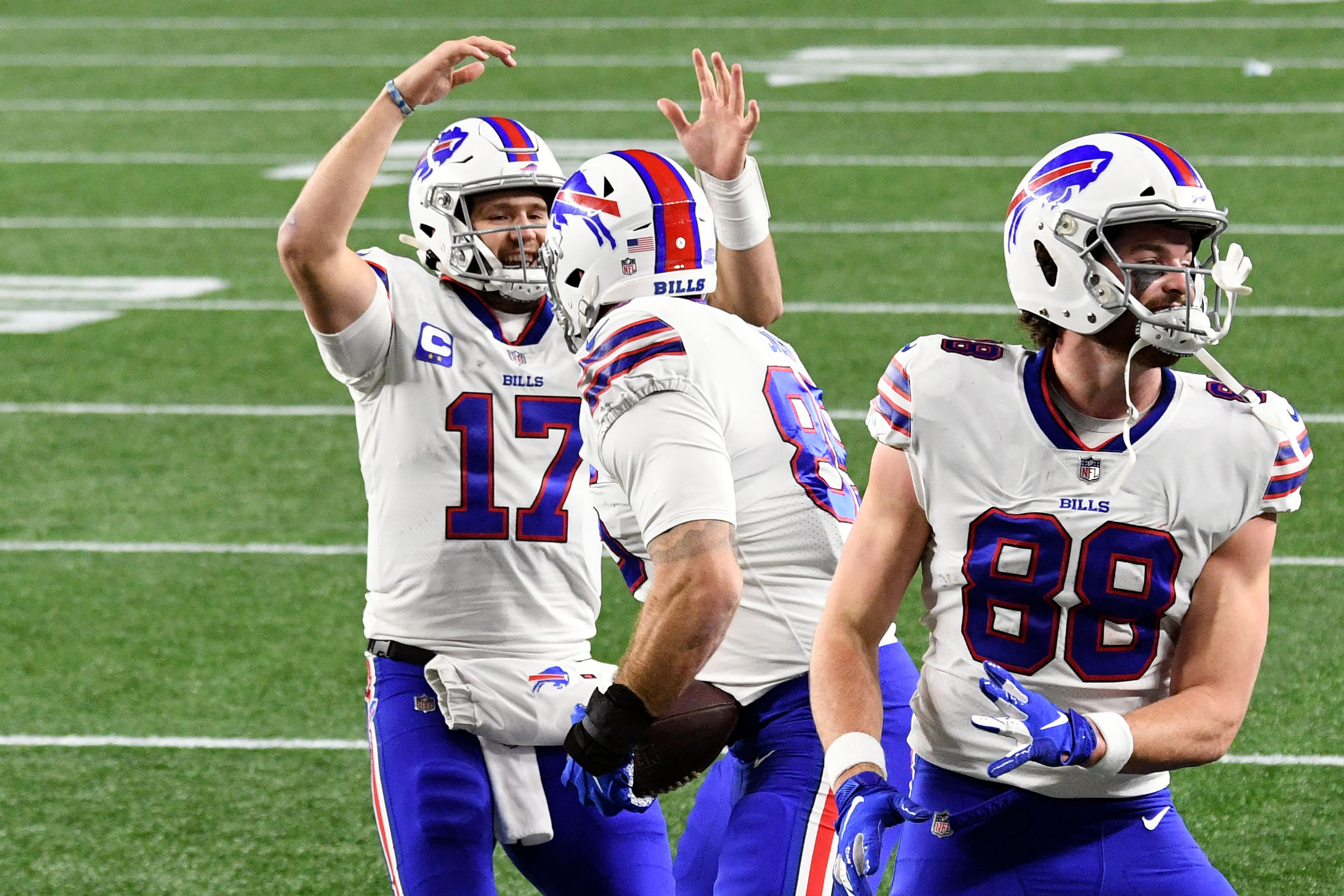 The Buffalo Bills were division champions either way, but a national display of power meant a little more considering who it came against.

Trophies for division titles don’t exist in the NFL. There was no trophy ceremony after the Buffalo Bills won their first AFC East honor last weekend in the Rocky Mountains. Sure, a good portion of Bills Mafia flocked to Buffalo Niagara International Airport to welcome them home, but there was no, say, sword or official championship belt to display upon landing.

But the Bills were more than happy to stage a coronation ceremony in front of a national audience on Monday night.

Granted their fourth consecutive nationally televised contest, the Bills added insult to the New England Patriots’ injury to the tune of a 38-9 shellacking at Gillette Stadium. Buffalo (12-3) dominated every aspect of the victory, outgaining New England 474-201, limiting them to 11 first downs, forcing a quarterback change that signified that the search for Tom Brady’s successor is anything but over, and causing the eternally stoic Belichick to lose his cool on an innocent sideline phone.

The victory is the Patriots’ most one-sided loss of the Belichick era and the worst endured at the modern Foxboro stadium since its 2002 opening.

On paper, the victory over a Patriots team that fell to 6-9 on the season. Buffalo did what they were supposed to do. They did a little thing, thoroughly defeat a squad removed from the playoff picture, extraordinarily well.

But there’s no denying that the opponent played a role in Buffalo’s elation.

Monday marked the exorcising of horrifying gridiron demons beyond imagination, malevolent football spirits that had haunted Western New York since the turn of the century. The two most dreaded days in Buffalo in recent years…other than opening night of Sabres season…have been the yearly get-togethers with the Patriots. New England entered 2020 with a downright jaw-dropping 35-5 advantage in the new millennium. One of the rare Buffalo victories came when Brady was serving a suspension for his role in the infamous “Deflategate” incident.

But with Brady having absconded to Tampa Bay (and joining the Bills in the NFL playoffs), the Patriots have fallen and the questions have only accumulated. The Bills took a hard-fought 24-21 decision from New England in the Orchard Park portion in November and had a chance to earn their first double against the Patriots since 1999. They entered the game as Foxboro favorites and were in no danger whatsoever of losing their status as division champion.

A nationally televised opportunity to earn that elusive sweep, however, was a perfect chance to stage a changing of the guard through symbolism often found only in storybooks.

The Patriots’ utter dominance in the Buffalo series often served as fuel toward their unprecedented streak of AFC East titles, winning all but three since 2000. Those wins over the Bills (as well as wins over fellow also-rans from East Rutherford and Miam) were unimpressive and easy to dismiss on paper. But New England did those little things extraordinarily well, and did so on a consistent basis. It’s part of the reason why they have, more often than not, been among at least the final four contenders come Super Bowl time.

Buffalo’s synergy in symbolism and the timing of one of their most dominant efforts in recent memory could not have been better. Whereas New England faces indefinite questions about their franchise quarterback slot after Cam Newton was mercifully pulled from the proceedings for Jarrett Stidham, Josh Allen threw four more touchdown passes and strengthened his MVP case. The Patriots’ shortcomings on both the free agent and draft fronts were made all the more apparent through the efforts of Buffalo acquisitions like Stefon Diggs (9 receptions, 145 yards, 3 touchdowns). Shown to be unstoppable to opposing defense over the past few weeks, Allen and Diggs have also laid waste to the Bills’ record books, shattering historic marks left and right en route to AFC East supremacy. Diggs is now the Bills’ single-season leader in receptions and yardage, surpassing campaigns from Eric Moulds, while Allen broke Jim Kelly’s long-standing touchdown pass record.

Elsewhere, day three depth gem Siran Neal, normally a safety, channeled his high school days at Miami Killian and picked up a first down through a fake punt reception from fellow former Cougar Jaquan Johnson…another choice found at the tail-end of the draft.

Those who bore the most brutal form of New England-based punishment played their part in the victory as well. Reserve tight end Lee Smith, used primarily for his blocking talents, scored a four-yard touchdown that permanently shifted momentum after a New England scoring drive…one that proved to be their last thanks to a sterling defensive effort from a Bills defense featuring Jerry Hughes. Smith and Hughes are the lone holdovers from Buffalo’s 17-year playoff drought and the New England nightmares that came with it.

There was no better way for Buffalo to inform New England that there was a new sheriff in town and to warn the rest of the NFL that their Super Bowl dreams are just as legitimate as those conjured in Kansas City.

“We’re going to come out swinging out the gate. That’s just Buffalo Bills football,” Hughes said in a report from Matt Parrino of Syracuse.com. “We find a way to put our backs against the wall, that’s our mentality. Once that kickoff happens, you’re getting us. You’re getting dogs, you’re getting controlled aggression. We’re coming at you.”

“This is an organization, being the Patriots, that (has) given the Bills fits over the years,” Bills head coach Sean McDermott said in the postgame, per Sal Maiorana of the Rochester Democrat and Chronicle. “It’s a win in both games against the Patriots and then to win the way we did tonight, I think it just speaks volumes about our players and coaches and the team that (general manager Brandon Beane) has put on the field.”

Hughes was all too gleeful to add that, after years of enduring New England’s bullying, it was fun to be on the dealing end of it.

“I was telling some of the guys on the sideline, I haven’t had this feeling in Foxborough ever,” Hughes said in the Parrino update. “This was a nice feeling to come back here in this stadium and return a nice punch in the face. It felt good.”

One could write a book about the dubious streaks this magical season has ended. Buffalo knows their most vital streaks…particularly those of postseason futility…loom large.

But this slaying of the metaphorical New England dragon shouldn’t just scare the Patriots’ faithful…but the rest of the league as the playoffs approach. 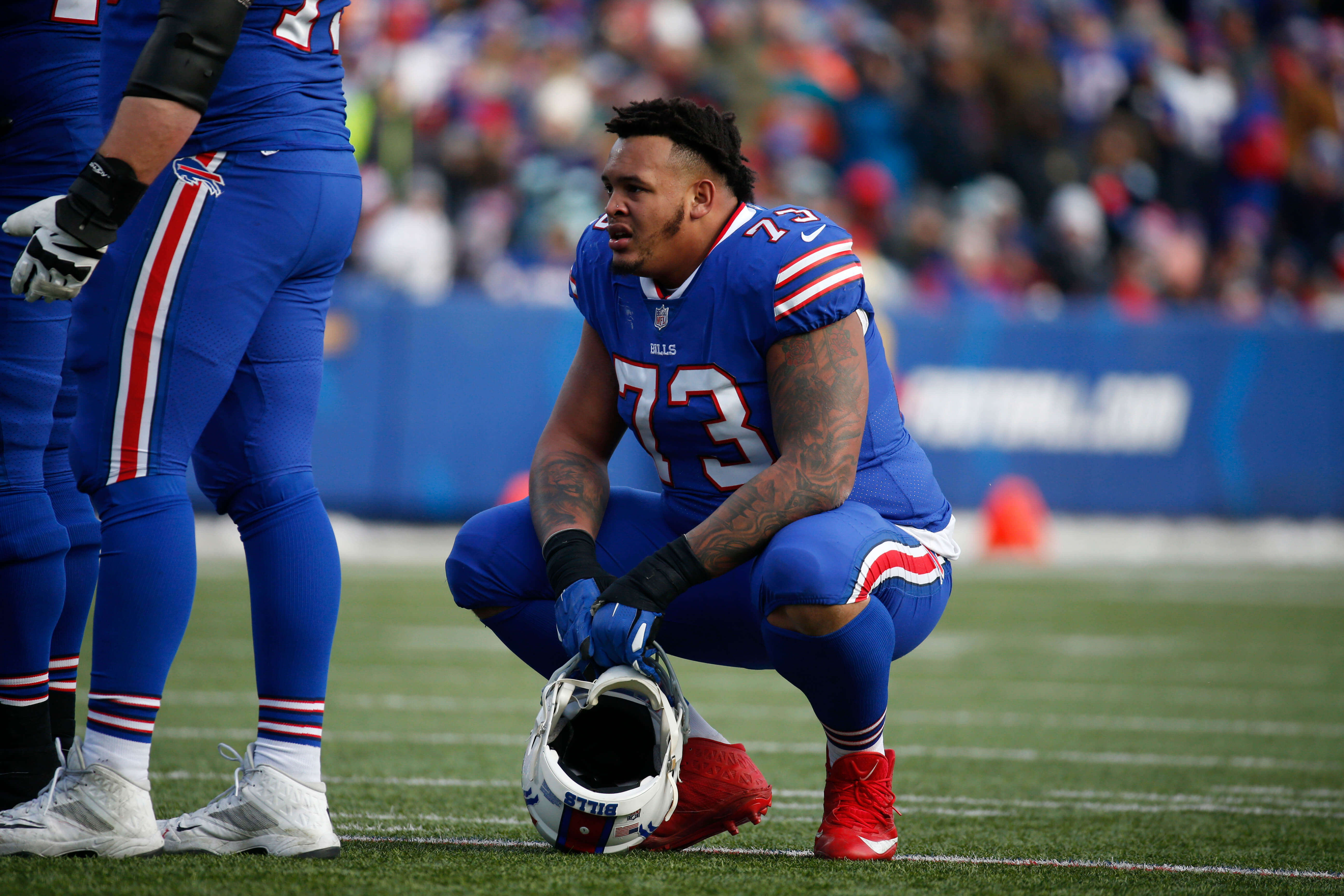 Buffalo Bills offensive tackle Dion Dawkins may call himself “Shnow”, a catchphrase coined by him to stand out from the rest, but he could not be any warmer!

Being kind and making a difference in the lives of others is something Dawkins loves to do.  He surprised kids at Grice Middle School and chatted with them. To honor those that serve our country, Dawkins spent the day with over 100 veterans and showed his gratitude and appreciation for their service.  When the Thanksgiving holiday rolled around, Dawkins served food along with his teammates, dedicating his time to ensuring that those in need have a hot meal.  One cause that he is passionate about is the Society for the Prevention of Cruelty to Animals which he often visits to spend time with them and help promote adoption.

Often times, you can find him visiting with children and handing out toys and other goodies, at New York’s Oishei Children’s Hospital which focuses on pediatric, neonatal, perinatal, and obstetrical care.  One particularly memorable and sweet visit involved Dawkins teaming up with some very special members of the hit movie “Frozen”.  The kids were absolutely elated and Dawkins was just as happy to see smiles adorn their precious faces.  When the Coronavirus prevented him from visiting patients in person, Dawkins decided to do a virtual visit with Finley a young pediatric patient.  Dawkins was thrilled to see the joy on Finley’s face as he opened presents and basked in the joy of the day!  Dawkins also sells Shnow merchandise and gear at https://26shirts.com/collections/shnow-gear with proceeds from sales benefiting pediatric cancer.

To promote change so desperately needed, Dawkins penned a beautifully articulated message about how we as a collective whole must fix the wrongs and ills plaguing African Americans brought on by society and then work towards figuring out how we can come together and love and accept one another unconditionally.  This message speaks volumes and is something we all MUST enact in our lives.  Dawkins is trying to make a positive impact in the world for all!

Dawkins is always “shnow”nating his time and helping others and that is truly commendable.  He is a game-changer and uses his platform so wonderfully to work to amend issues and problems bedeviling America!  There truly is “shnow”one like Dion Dawkins!