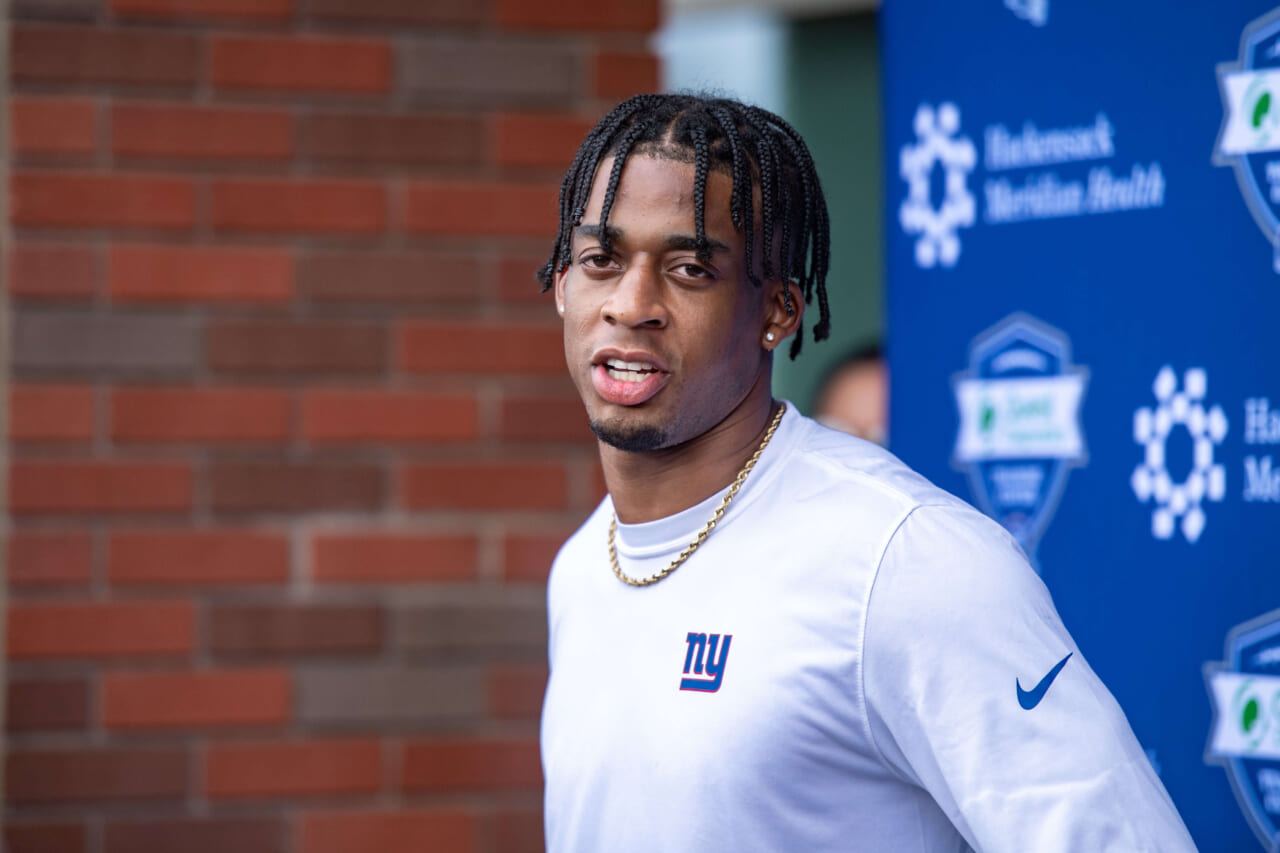 Despite being a wirey cornerback at 6’1″ and 178 pounds, LSU defender Cor’Dale Flott has all of the intangible traits to become a quality NFL player. The New York Giants spent a third-round pick on Flott, who is bringing some talented attributes to a secondary that just released top cornerback, James Bradberry.

His significant development points toward positive progression, which is largely why the Giants keyed in on him as a third-round draft pick.

“I’m always the first person on campus — have been for years,” Flott’s high school coach Jeff Kelly told the New York Post. “The thing I’ll never forget is that every morning I rolled in that summer, Cor’Dale was out there and it was barely daylight. There was nobody with him — just him and his bag of cones and his step ladder for all his footwork drills. I don’t think he ever told me, and it wasn’t a deal that he was doing to be seen or to prove to the coach how hard he works.”

New management is constantly looking for high character guys who give everything on the football field but also put in the work behind the scenes. The Giants have had some questionable personalities join their team in recent years, but the most recent draft class seems to be full of committed individuals that have plenty of untapped potential.

“I’ve been doing it all my life: Being built like this, growing up, playing this game of football, everybody telling me I’m too small to do it,” Flott said. “I just focus on making an impact on the team.”

There is no question that Flott needs to add a bit of size to his game. With an NFL diet and workout plan, he should be able to add 5–10 pounds of muscle mass before the season begins, but hopefully it doesn’t impact his speed and agility.

Flott is a bouncy corner, capable of changing directions by using his momentum to shift his feet and react accordingly. He will immediately compete in the slot with Darnay Holmes. Aaron Robinson projects to move outside to replace Bradberry.

“I’m ready. Hopefully, I get the job,” Flott said. “Right now, I’m just focusing on improving and being able to fit wherever I am needed.”

Flott enjoyed 357 snaps last year in the slot and 178 outwide. Clearly, he fits the nickel role a bit better, but he has a long way to go before the Giants can depend on him routinely. He will have trouble making tackles at the next level, which is why he desperately needs to add more size to his frame. Flott participated in every combine measurement but the bench press, which likely would’ve displayed a severe lack of strength.

The Giants clearly seem optimistic they can improve his muscle mass and alleviate that concern. 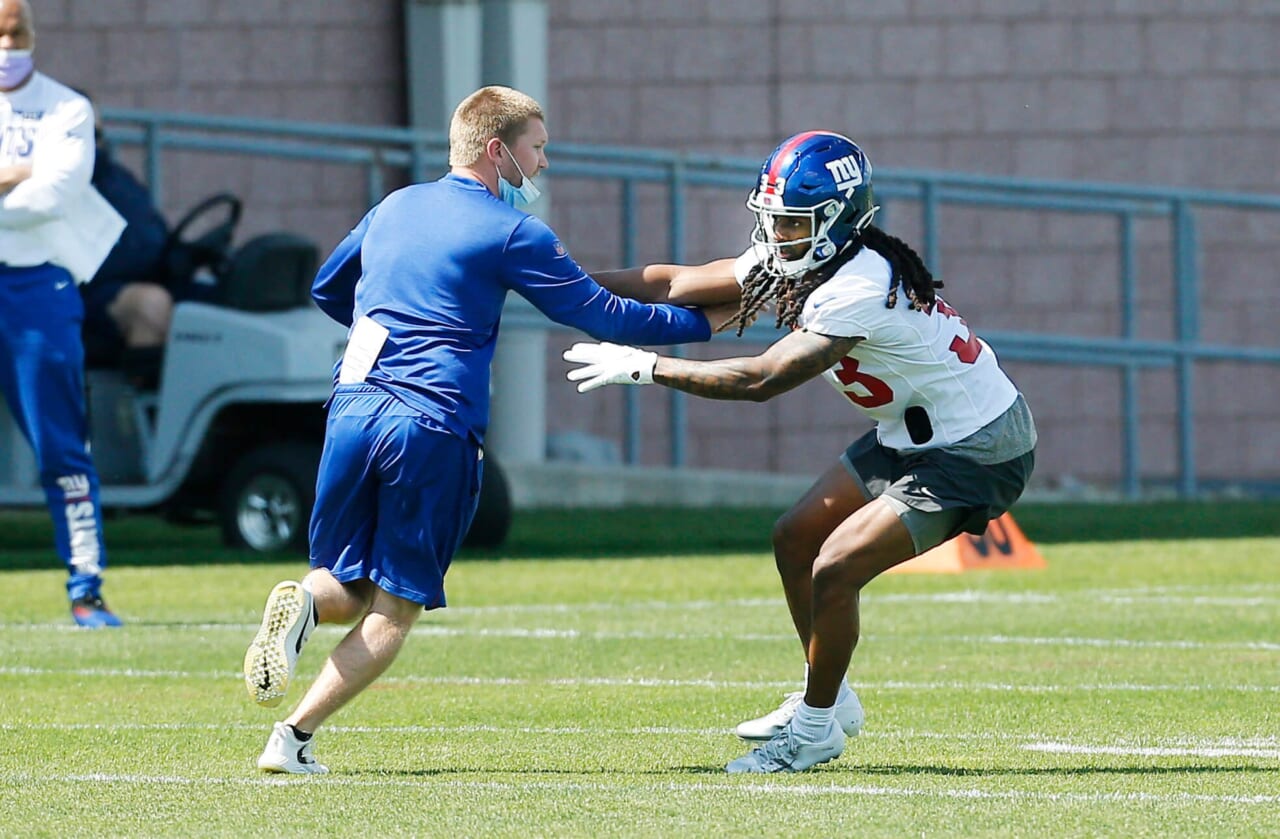 The New York Giants made a major move today to free up salary-cap space. Veteran cornerback James Bradberry was released after two impressive seasons with the team. Bradberry was one of the Giants’ best players but they could not afford to keep him any longer. The move to release Bradberry freed up $10.1M in salary cap space for the Giants. New York now has money to invest in its rookies, but it also has a major hole to fill on its defense. Who will replace James Bradberry in the Giants’ starting lineup?

Could the Giants find Bradberry’s replacement in free agency?

There are a few free agents that the Giants could potentially target to replace James Bradberry. Releasing Bradberry freed up some cap space for the Giants to work with, but most of that money will be allocated toward their 2022 rookie draft class. With what little money shall remain, New York could look to sign a free agent on a veteran minimum contract.

Veteran cornerbacks like Joe Haden, Kyle Fuller, and Xavier Rhodes could be options for the Giants. All three of these cornerbacks play on the outside and have been in the league for some time. Admittedly, these guys are all past their prime playing years, but it could be beneficial for the Giants to sign one of these veterans with the hopes of receiving average cornerback play and stability along the boundaries.

Who could step up on the Giants’ roster?

Adoree’ Jackson is the new CB1 in town for the Giants. Jackson played as CB2 opposite of Bradberry in 2021 but will elevate to the primary role now. But who will now play opposite of Adoree’ Jackson? There are some young cornerbacks on the Giants’ roster who could compete for the position.

Aaron Robinson is a name to keep an eye on. The 2021 third-round pick flashed potential as a rookie. He played primarily as a slot cornerback in college and as a rookie, but Robinson’s aggression and size could make him a match on the outside. Aaron Robinson is 6-foot-1, 193 pounds, giving him adequate size as a boundary corner. He was targeted in coverage 30 times as a rookie, allowing 19 completions for 207 yards and 1 touchdown. ARob also managed to break up 3 passes while racking up 26 combined tackles after appearing in 9 games with 2 starts.

Another young cornerback that could compete outside is rookie cornerback Cordale Flott. The Giants drafted the LSU product in the fourth round of the 2022 NFL Draft. Cordale is another nickel cornerback that could convert to the outside. He is a bit light, though, to play on the boundary in the NFL. But where Flott lacks in size, he makes up for it with his aggression and ball skills. Cordale had 13 PBUs and an interception in college; 5 PBUs in 2021. In college, Flott aligned 394 times outside, 797 times in the slot, and 93 times in the box (PFF). The Giants will need to get Cordale Flott more comfortable outside if they view him as a replacement for James Bradberry. 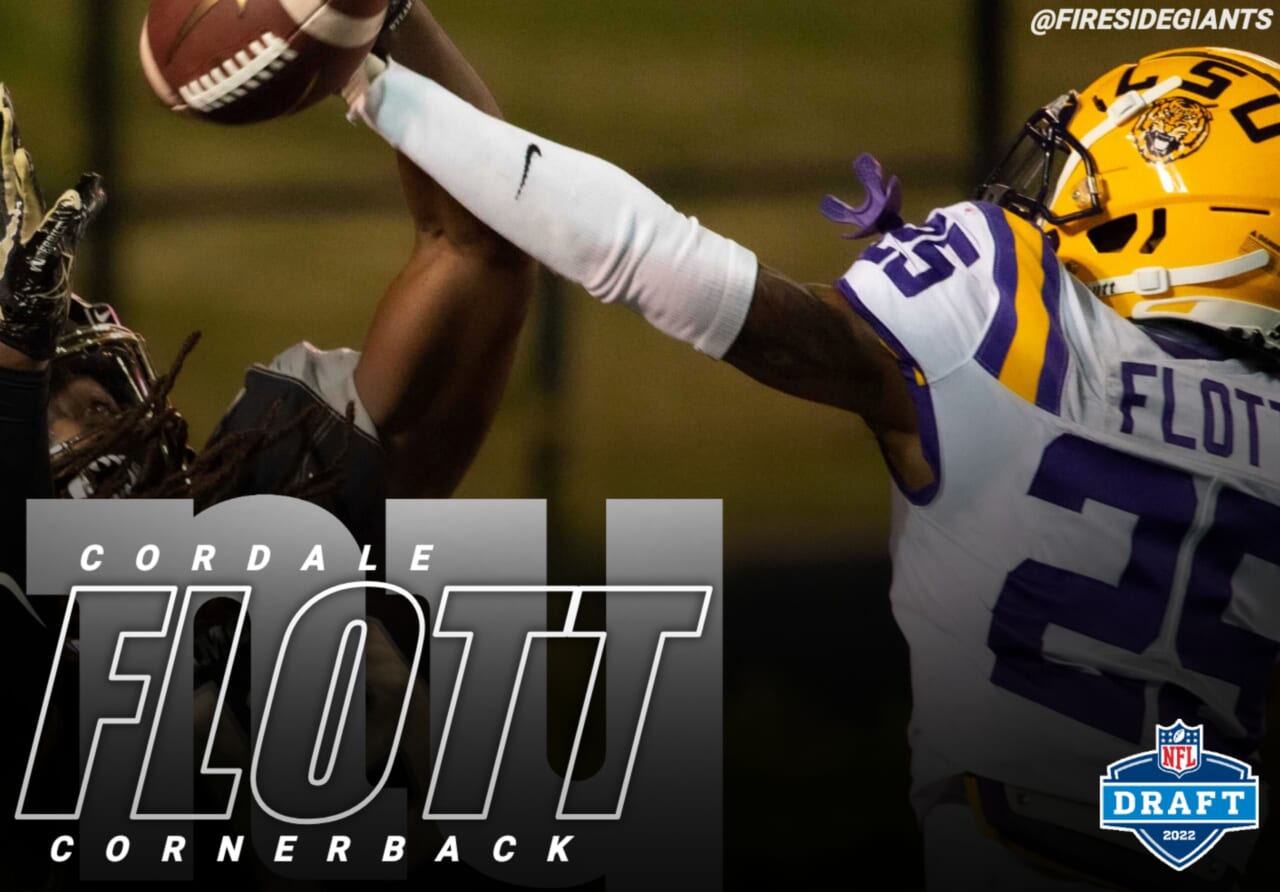 The New York Giants used a couple of draft picks in the later rounds of the 2022 NFL Draft to add depth to their secondary. One of the more intriguing players that they selected was Cordale Flott out of LSU. Cordale Flott is a speedy slot cornerback that could make a decent impact on the Giants’ defense.

What will Cordale Flott bring to the Giants?

With the 81st overall pick in the 2022 NFL Draft, the New York Giants selected cornerback Cordale Flott out of LSU. With their second pick in the third round, the Giants identified Flott as an under-the-radar cornerback. Cordale is a tall cornerback coming in at 6-foot-1, but he is also a bit light, weighing in at only 175 pounds. This skinny, lanky coverage man tends to play above his weight class, though, posting 40 or more total tackles in each of his last two collegiate seasons while also forcing 2 fumbles.

“Flott had his best season in 2021, earning a PFF coverage grade of 84.8 and allowing 51.1% of passes thrown his way to be caught.” – Pro Football Focus on Cordale Flott

Cordale Flott primarily played as a nickel in college. But PFF feels that Flott “has the traits to be an outside corner and contribute to this defense if he can take on that sort of responsibility.” He aligned 394 times outside, 797 times in the slot, and 93 times in the box. The Giants have a couple of capable slot cornerbacks on the roster already in Aaron Robinson and Darnay Holmes. It might be tough to determine where Cordale Flott fits in, but given the uncertainty surrounding James Bradberry’s future with the team, it is not unreasonable to suspect that the Giants will be trying to convert Flott into a boundary cornerback.

The Giants will have a fun time developing an athletic young talent in Cordale Flott. He is an aggressive, lanky cornerback from a university that produces some of the best defensive backs in the NFL on a consistent basis. It might take some time for Cordale to earn his reps and develop into a starter, but the traits are there. The New York Giants are getting a versatile athlete to round out their secondary in rookie cornerback Cordale Flott.