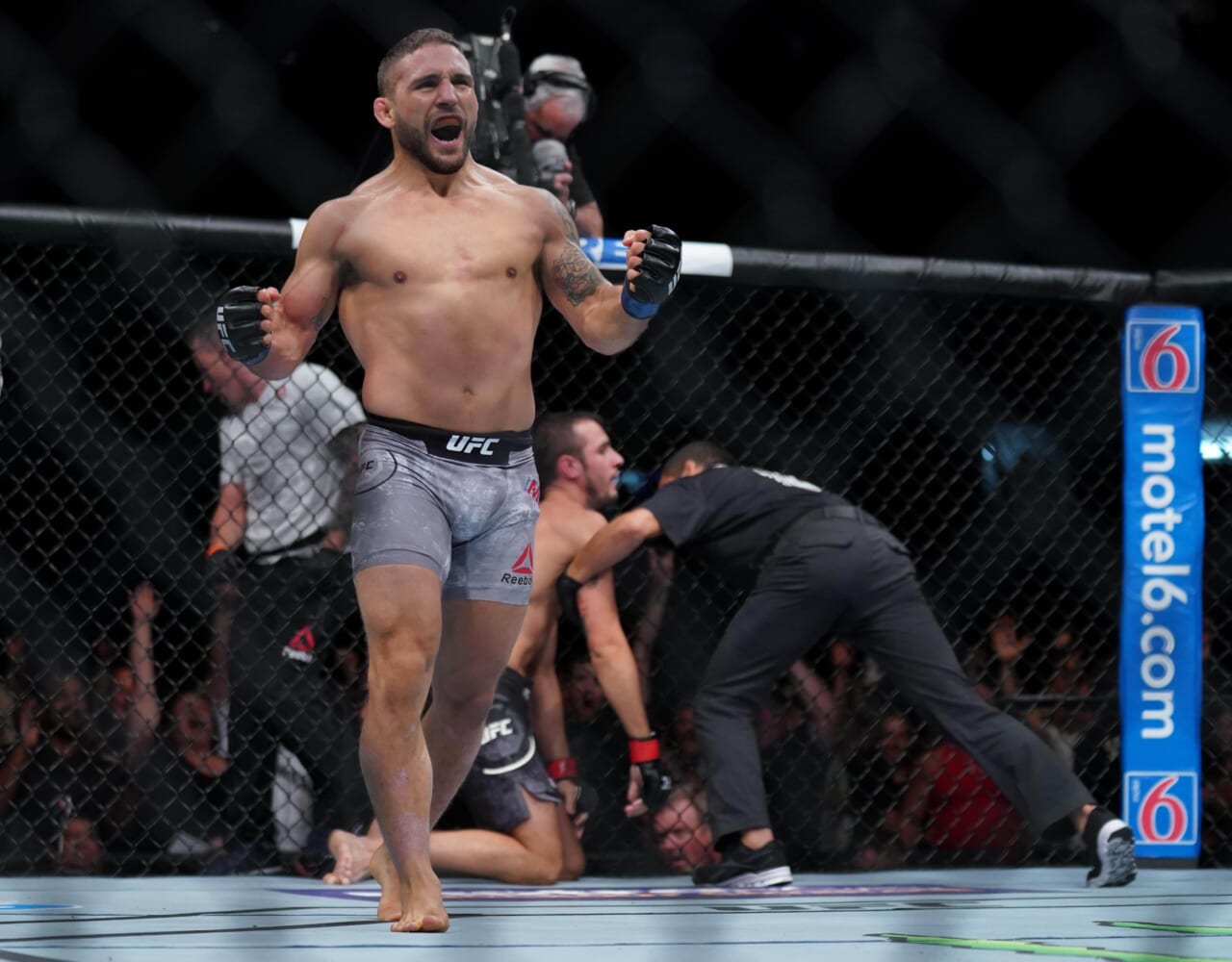 For Mendes, BKFC’s Knucklemania will be the first time we’ve seen him compete in combat sports since the end of 2018. The last time we saw Mendes was at UFC 232 when he was taking on the now featherweight champion Alexander Volkanovski.

While Mendes had some moments here and there, he was ultimately stopped in the second round of that fight. It was just his second fight in the UFC after returning from a two-year absence due to a positive PED test.

Earlier in the year, Mendes had emphatically stopped Myles Jury. After he lost to Volkanovski, Mendes announced his retirement from MMA. However, just a few years later, he started getting that competitive itch back.

He started posting photos of himself boxing and teased a comeback. While many jumped to the conclusion that he would be returning to the UFC, Mendes announced that he had signed with BKFC and would be taking his talents to bare knuckle.

Under contract with BKFC and the UFC

An interesting note from Mendes came this week when he stated that he was still under contract with the UFC. In fact, Mendes has three fights left on his current deal and needed to get the UFC’s permission to sign on for BKFC.

The promotion approved Mendes making the switch which allowed him to compete. When asked if he would consider returning to the UFC, Mendes told MMA Junkie that he would never under the deal that he currently has with three fights left.

Hard to blame him considering the guarantee payout tomorrow night is astronomically higher than his UFC guarantee. He said he would consider it but only under a new deal. With Mendes having been out of the UFC for some time, I don’t see that happening.

With that, it’s likely going to be BKFC for Mendes permanently moving forward. I’m very curious to watch him tomorrow night. Mendes has a wrestling base, but he’s always shown great power in his hands. It’ll be interesting to see how he translates to BKFC.

BKFC has landed another former top UFC fighter for their roster. Today on The Joe Rogan Experience, Chad Mendes (18-5 MMA) announced that he was ending his retirement and that he had signed a deal with BKFC.

MMA Junkie also reported the signing. Mendes has signed a multi-fight deal with BKFC and he’s looking to make his debut in October. The former top UFC contender has said that he’s going to be competing at 155 pounds for Bare Knuckle.

The last time we saw Mendes was back in 2018 when he fought Alexander Volkanovski at UFC 232. Mendes had some bright spots in the fight, but was ultimately stopped by Volkanovski in the second round.

After the fight was over, Mendes announced his retirement from the sport. Mendes was 33 years old at the time, but he felt like he had nothing left to give in the sport and his passion just wasn’t there.

Mendes had been through a lot with the UFC. He rose all the way to the top of the featherweight division and challenged for the interim title and the undisputed title a combined three times.

Unfortunately for Mendes, he went 0-3 in those fights. After he lost to Conor McGregor for the interim title, he was knocked out by Frankie Edgar. Shortly after the Edgar fight, Mendes tested positive for a PED and was suspended for two years.

He came back and won against Myles Jury before proceeding to the Volkanovski fight. Mendes had been posting on social media that he was getting the itch to compete again and he’s been doing a lot of boxing. Now, we know that he’s heading to BKFC.

BKFC has made some moves to try to get more mainstream MMA and Boxing stars over to the promotion. They’ve signed former UFC fighters like Paige VanZant, Rachael Ostovich, Artem Lobov, Joey Beltran and more.

BKFC has even had former boxing world champion Paulie Malignaggi compete under their banner. The signing of Mendes is just another move for BKFC to add more top talent to try and bring in more casual fans. It’ll be interesting to see what Mendes has left in the tank when he competes later this year.