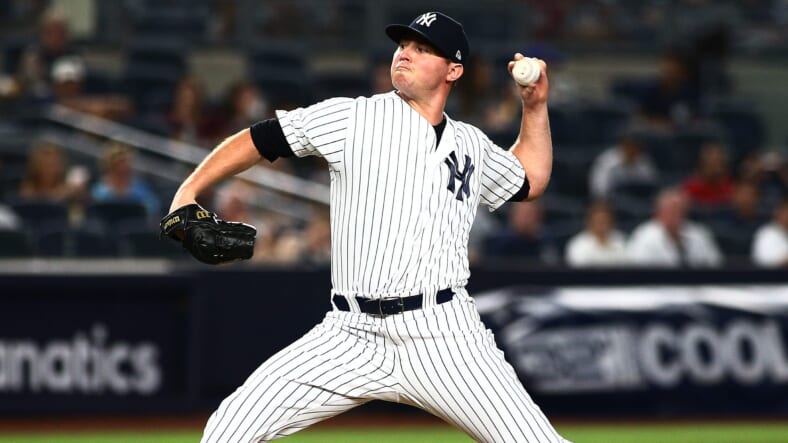 The New York Yankees are proceeding with starting pitcher Domingo German on their roster, and some players might not feel he deserves a second chance based on his previous actions.

As we know, German served a lengthy suspension for a domestic abuse case that was witnessed by an MLB employee. Justifiably, he missed the entire 2020 season and almost half of the 2019 season. After taking more than a year off, the Yankees feel German is ready to return to the team, despite making cryptic messages over the past several months indicating heâ€™s retiring from baseball and then re-emergence.

Players already on the team will have to deal with the decision from management, and maybe they should have considered his teammate’s opinions before welcoming him back.

Relief pitcher Zack Britton surely had words on Germanâ€™s return and how he feels about the situation:

â€œThatâ€™s tough question,â€ Britton said in a Zoom interview. â€œI donâ€™t think he owes anything to me. I think itâ€™s off the field stuff that he needs to take care of. Sometimes you donâ€™t get to control who your teammates are, and thatâ€™s the situation. I donâ€™t agree with what he did. I donâ€™t think it has any place in the game or off the field at all.â€

â€œMy job is to go out there and pitch and do my job,â€ Britton said. â€œSo thatâ€™s kind of what my concern is right there. But (German) doesnâ€™t owe me anything. I think thatâ€™s something that heâ€™s going to have to deal with on his own and make better choices going forward.â€

The Yankees feel as though German has done enough, so it seems:

Based on the fact that the Yankees have welcome German back, it is safe to assume heâ€™s done the work off the field to prove he has learned his lesson. Nonetheless, a strange Instagram post stating in Spanish, â€œeverything is over,â€ brought the attention of skipper Aaron Boone into the fold.

â€œHe and I had a conversation (Thursday) about that,â€ Boone said. â€œI donâ€™t feel like Iâ€™m in a position to tell somebody how theyâ€™re express themselves or whatever (but) certainly weâ€™re paying attention to that stuff.

â€œFirst and foremost, we want to make sure that Domingoâ€™s in a good place. When I first heard about (the Instagram messages on Wednesday) night and saw it â€” it was brought to my attention â€” I was taken aback a little bit and immediately concerned. But I do feel like maybe it was a little bit out of context and a little bit overblown and I am comfortable that heâ€™s doing fine and doing well and ready to compete.â€

Whether or not the players agree with the return of German, he will likely find himself competing for a starting spot in the rotation. Thereâ€™s a good chance he makes his way into the fifth spot, but his polarizing emotions during his time have brought forth some concerns. This is a situation we will need to monitor as spring training progresses.