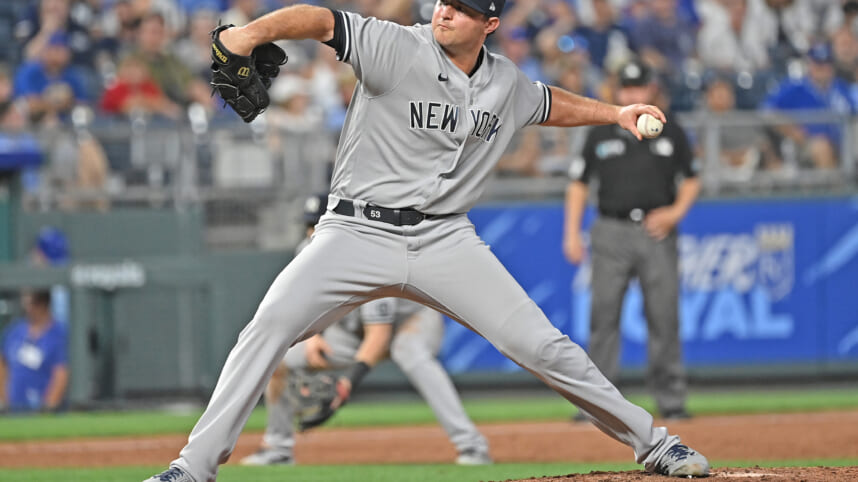 The New York Yankees not only announced that closer Clay Holmes was dealing with a strained right shoulder, but they also lost veteran bullpen arm, Zack Britton, during Friday’s loss to the Baltimore Orioles.

Britton has had a tumultuous return back to baseball, giving up one earned run and walking six batters in just 0.2 innings across three appearances the past week. It was always a longshot that Britton would make an impact during the playoffs, especially given his struggles recently and having pitched just 18.1 innings in 2021 and 9.0 innings in 2020.

He is far from providing any sort of consistency the Yankees can rely on in high-leverage moments, which is essentially every moment during elimination rounds.

Luckily, Zack didn’t suffer any further injury to his surgically repaired elbow, rather just experiencing some general fatigue the Yankees wanted to dance around.

“More than anything, elbow’s fine,” Yankees manager Aaron Boone said after the game. “I think it’s a case where we didn’t want to push through something, reach for something that wasn’t there, and hurt yourself. Just being out there now in stressful situations and reaching for it, we’ll see what we have tomorrow.”

“We’ll see where we are tomorrow with him,” Boone said. “I think the good thing is he’s checking out fine. Hoping it’s nothing too serious.”

The Yankees are undoubtedly gearing up to move on from Zack Britton:

Britton is in the final year of a three-year, $39 million contract with the Yankees, paying him $14 million for the 2022 season. He’s set to become a free agent at the end of the year, with the Yankees unfortunately not being able to extract maximum value from the once great closer.

If the Bombers also elected to leave Aroldis Chapman off the playoff roster, the only reliable lefty bullpen arm they have is Wandy Peralta, who is currently on the injured list with back issues. However, the expectation is that Peralta will return before the end of the season to get one final appearance before being utilized frequently in the playoffs.