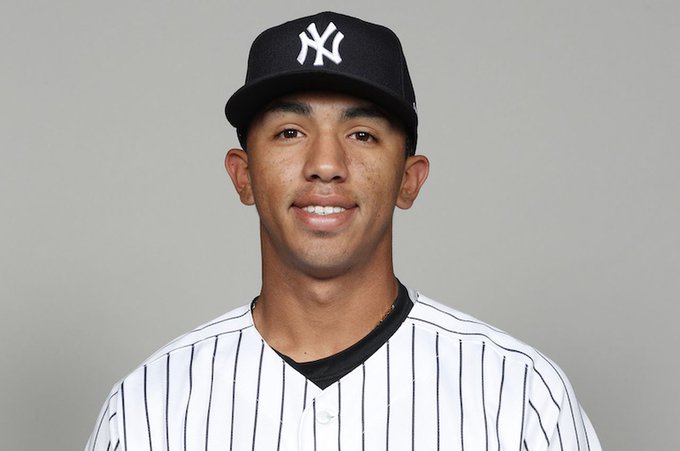 The New York Yankees are sold on Gleyber Torresâ€™ offensive abilities, even if he has struggled this season and only has one home run. They know what he is capable of, as he bopped 38 round-trippers just a couple of seasons ago. Yet, they arenâ€™t convinced he can be their shortstop of the future when it comes to the glove.

Torres has made strides this year on the field after a rocky start, but down on the farm, the Yankees have a natural, smooth fielder whose offensive stock is going way up if we consider his blistering start to the season.

Oswald Peraza, by most accounts a top-five prospect in the Yankees system, is tearing the cover off the ball in Class A-Advanced so far in 2021.

The 20-year-old shortstop has taken a major step forward in his development as a batter. In his first ten games, Peraza is hitting a robust .308/.400/.667 with four home runs, nine stolen bases, a .464 weighted On-Base Average (wOBA) and a 191 weighted Runs Created Plus, or wRC+.

The Yankees are excited about his potential

He is taking a more aggressive approach that is resulting in a rather high, but still manageable 22.2 strikeout percentage, but it has come with loads of power. The Yankees are certainly welcoming the change, as any development as a batter will put the slick fielding shortstop in the elite of the prospects rankings.

Yankeesâ€™ manager Aaron Boone had already praised Peraza in early March after seeing him in spring training. â€œHeâ€™s a guy, from a future standpoint, weâ€™re about as excited as you could be,â€™â€™ Boone said of Peraza. â€œHe looks like a guy whoâ€™s gonna be an everyday shortstop in this league.â€

The Yankeesâ€™ skipper was impressed with three aspects of Perazaâ€™s game back in March: his swing, his smooth hands at short, and his athleticism. Judging by the early 2021 performance, the arrow is pointing way up for Peraza.