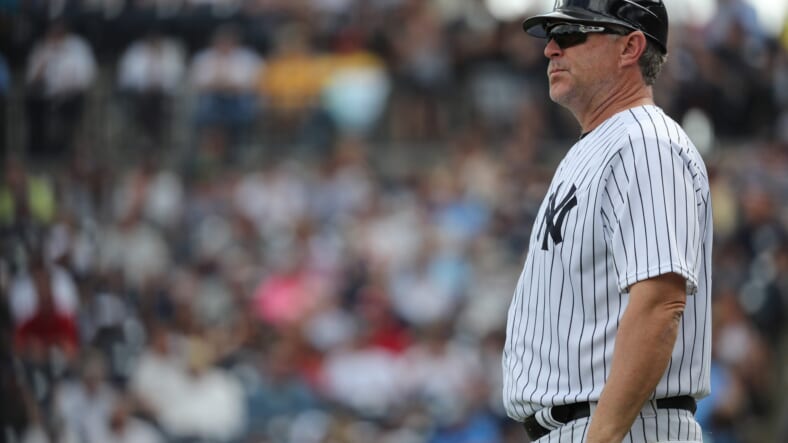 The New York Yankees were eliminated in Tuesdayâ€™s Wild Card game at the hands of their biggest rivals, the Boston Red Sox. They lost 6-2 at Fenway Park, in a game in which the Yankeesâ€™ offense went missing yet again. Gerrit Cole couldnâ€™t complete three innings, and besides Giancarlo Stanton and Anthony Rizzo, the bats couldnâ€™t get much going.

There was a pivotal play in the sixth inning, though. With one out, Rizzo belted a solo home run that brought the score closer, 3-1. Aaron Judge got on base via infield single, and thatâ€™s when Red Sox manager Alex Cora took out Nate Eovaldi, his starter, who had been dealing.

Stanton came to the plate and hit one off the Green Monster. With Judgeâ€™s sprint speed only slightly above-average, Boston outfieldersâ€™ knowledge of their home park and how the ball bounces off the Monster, and the 114.9-mph blast, it made sense to hold Judge at third.

Yankeesâ€™ third base coach Phil Nevin waited a long time, perhaps too much, and sent him home when he was almost at third base. He was called out on a beautiful defensive play by the Red Sox that included quickness and precision from Kike Hernandez and Xander Bogaerts.

A costly mistake by the Yankeesâ€™ coach

Had Nevin held Judge, the Yankees would have had men on the corners and one out, down two runs. The outlook could have been different.

Former Yankeesâ€™ star Alex Rodriguez said on ESPN: â€œYou donâ€™t have to overthink that one. Iâ€™m surprised of the magnitude of that mistake [by Nevin] in this situation.â€

Nevin then explained his thought process: â€œI know what it looks like. I know what the situation is. I know what kind of third-base coach I am. I made a play to win the game. It didnâ€™t work out. It was a great baseball play on their side. In a big moment, it didnâ€™t go our way. … I was in the right position, made the right read [and] had conviction in my send. But I get it. I get why people are upset and people are mad.â€

Joey Gallo popped out to end the threat and the Yankees could only score again in the ninth on a Stantonâ€™s solo homer. That was it.