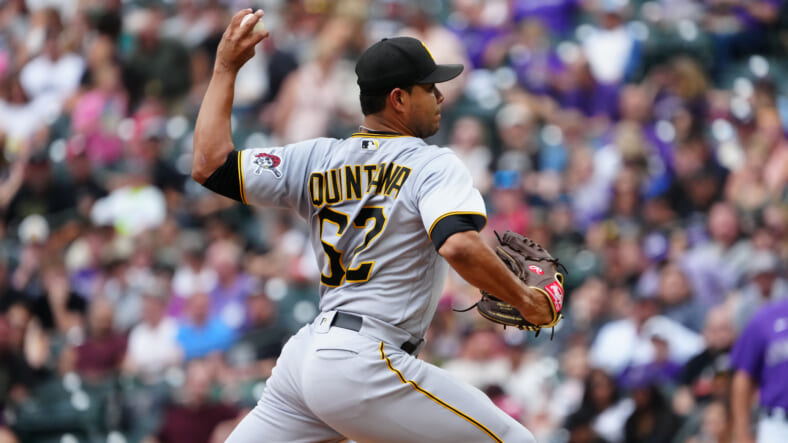 The New York Yankees lost out on Luis Castillo Friday night to the Seattle Mariners, who gave up a significant package to acquire the star starting pitcher.

Castillo was the top target for general manager Brian Cashman before the trade deteriorated, which shifts their attention to two other targets, one of them being the second best option on the market and another a cheaper supplement.

Two starting pitchers the Yankees are targeting at the deadline:

Losing Castillo was a slap in the face for the Yankees, who could’ve used another starting pitcher in the rotation. Alternatively, Frankie Montas of the Oakland Athletics is the second best option to acquire at the deadline on August 2. At 29 years old, Montas has one year left until he becomes a free agent in 2024. The season, he features a 3.18 ERA over 104.2 innings, including 9.37 strikeouts per nine, 73.4% left on base rate, and a 46.1% ground ball rate.

Montas hosts a 3.22 xFIP and 3.42 SIERA, featuring a myriad of pitches, including a 4-seam fastball, split-finger, sinker, slider, and cutter.

Montas would be a phenomenal addition to the rotation, pairing Gerrit Cole with another Ace. During October in the postseason, Montas would easily make a significant impact and help the Yankees put their best foot forward with World Series aspirations this season.

The Yankees have been adamant they don’t want to include Anthony Volpe in a trade, meaning they will have to package a deal around Oswald Peraza. The Reds desperately wanted Volpe included, but he’s been on fire the past few months, further justifying holding onto him.

If the Yankees want to go with a cheaper option, Jose Quintana is another arm the Yankees have been reportedly considering. At 33 years old, Quintana is having his best season since 2016 with the Chicago White Sox. He currently holds a 3.50 ERA over 103 innings the season, posting 7.78 strikeouts per nine, a 73.1% left on base rate and a 45% ground ball rate.

Quintana currently features a 7.1% HR/FB ratio, the second best in his career since 2014. He has multiple years of pitching over 200 innings, which showcases his reliability, especially during the postseason.

Quintana is on a one-year deal worth $2 million, featuring a 4-seam fastball, curveball, chainge-up, and sinker. His best pitch is currently his curveball, which he throws 27.1% of the time. His curveball is generating a .196 batting average against, a 32.3% WHIFF rate, and 22.6% put-away rate.

Acquiring Quintana from Pittsburgh would be far cheaper since he’s a rental having a resurgent season. That may end up being the route general manager Brian Cashman takes, trading for a solid bullpen arm in addition. Maybe they looked at packaging Quintana and David Bednar together in a more lucrative deal.