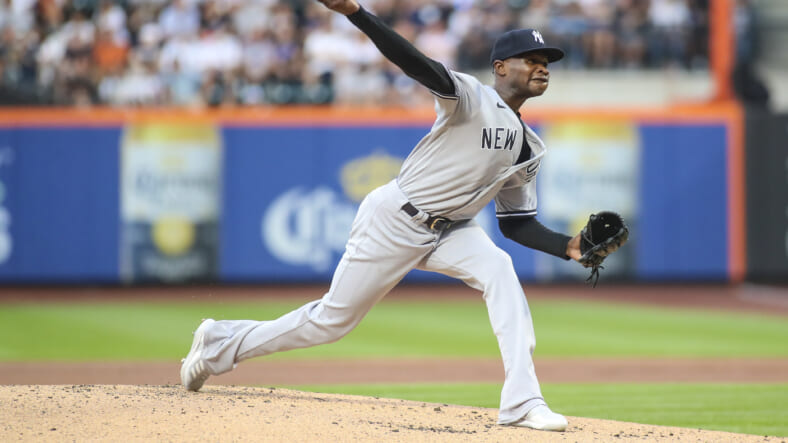 The New York Yankees and New York Mets wrapped up a two-game series on Wednesday night with the latter of the two teams securing both wins in the subway series.

The Mets defeated the Yankees 6–3 on Tuesday and 3–2 on Wednesday courtesy of a walk-off single from Starling Marte.

The Yankees sit with a 66–33 record on the season, well above .500, but have started to crash back down to Earth post-All-Star break.

The Yankees saw some value from Domingo German:

Starting pitcher Domingo German had an adequate performance, throwing 82 pitches over 4.2 innings, giving up five hits and two earned runs. He struck out seven batters but received no run support from his offense.

It was nice to see German bounce back after a tumultuous outing against the Houston Astros last week, giving up five earned runs in 3.0 pitches. Clearly, the Yankees wanted to see what German can provide them the rest of the season, and if he can continue pitching the way he did against the Mets, he will have value.

Offensively, the Bombers recorded seven hits but only received one hit with runners in scoring position. Gleyber Torres launched a two-run homer in the top of the 8th inning off David Peterson, who appeared after Max Scherzer dismantled the Yankee lineup repeatedly.

Scherzer pitched 7.0 innings of five-hit baseball and allowed zero runs, striking out six batters. Scherzer has been phenomenal this season, hosting a 2.09 ERA. The Bombers had their fair share of opportunities to produce runs, but Aaron Judge had arguably his worst game of the season, striking out three times in five at-bats.

DJ LeMahieu contributed two hits, and Gleyber Torres matched, but the Yankees clearly miss slugger Giancarlo Stanton in the lineup. His power and home run hitting capabilities play a significant part in their strategy. When Judge isn’t at the top of his game, normally, Stanton can supplement his unusual off night.

The Yankees will look ahead to a four-game series against the Kansas City Royals starting on Thursday. Jameson Taillon will get the start, coming off a tough performance against Baltimore where he gave up two earned runs in 2.2 innings before being pulled.

General manager Brian Cashman has targeted the Royals as a potential trade opportunity ahead of the deadline, focusing in on outfielders Andrew Benintendi and Michael Taylor.