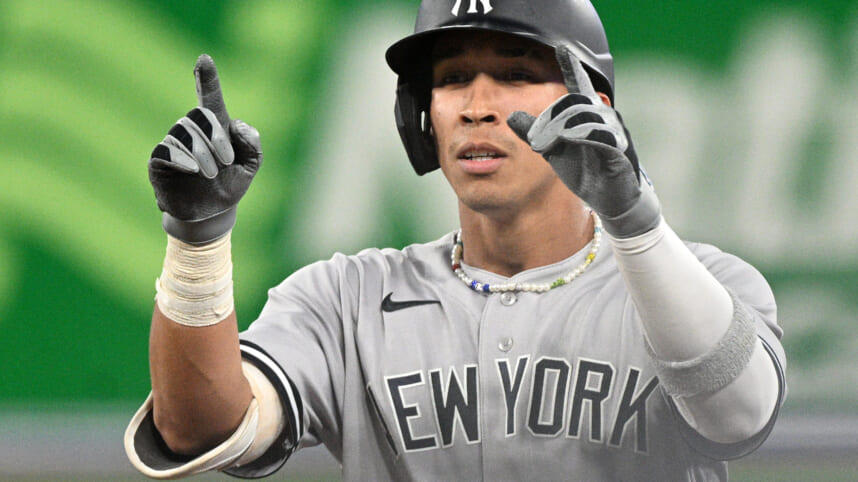 One of the New York Yankees’ top players as of late has been rookie Oswaldo Cabrera, who has made a name for himself over the past 40 games. With injuries in the outfield, notably to Andrew Benintendi and the lackluster performance of Aaron Hicks, the Yankees gave Cabrera a chance to prove himself, despite his traditional position being at second base.

Over 158 plate appearances this season, Cabrera is hitting .245 with a 31% on-base rate, including five homers and 18 RBIs. He hosts a 26.6% strike-out rate and 8.9% walk rate, showing far better patience at the plate recently.

A stellar month of September helped elevate Cabrera’s metrics considerably, hitting .259 with a 33.3% on-base rate, including all five of his homers and 16 RBIs.

In fact, his performance lately landed him on an impressive list of rookies preparing to feature in the playoffs.

ESPN’s Kiley McDaniel’s ranked the top 10 rookies expected to play in the post-season:

Cabrera was never really a Top 100 prospect type and doesn’t have the frame or speed to make scouts swoon … but he really has learned to make the most of his skill set. He’s a power-over-hit type who has figured out how, using ideal types of contact, to produce 25-ish homers the past two seasons with pretty ordinary raw power for a big leaguer and enough contact to avoid becoming a Ryan Schimpf-type.

The Yankees are getting a lot more than just offense out of Oswaldo Cabrera:

While Cabrera’s offensive statistics have increased gradually, it is his defensive qualities that have really stood out.

Of course, manager Aaron Boone might feel a bit more comfortable with Benintendi and his experience playing on an everyday basis, but Cabrera has carried his weight and then some since being called up from AAA in August.

At this point, Oswaldo is 100% penciled in as a primary starter in the outfield come the postseason, but he still has a few days left to mount some momentum against the Texas Rangers.

Against the Baltimore Orioles on Sunday, he got on base twice via a hit and walk, providing some value despite the rest of the team struggling offensively.