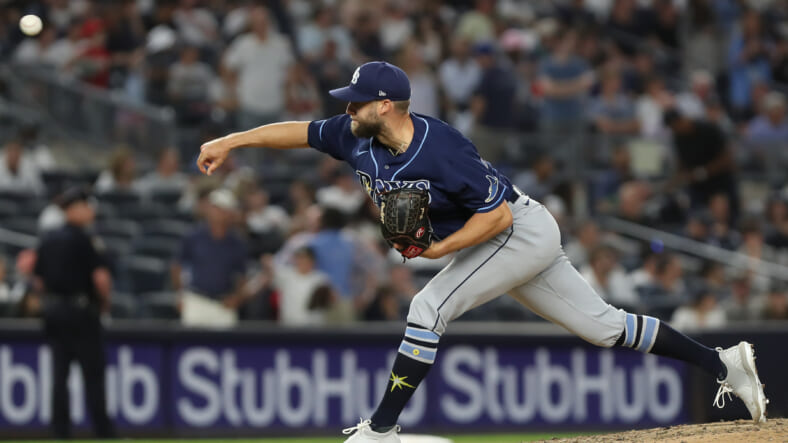 The New York Yankees were looking for a bit of bullpen support, especially with Miguel Castro still on the 60-day injured list. It is also possible they utilize Clarke Schmidt in the coming days as a potential spot starter; added depth to help smooth things over couldn’t hurt.

In addition, stealing a relief pitcher from the Tampa Bay Rays is always a good move, which is why the Yankees scooped up Luke Bard off waivers on Friday.

Earlier today, the Yankees claimed RHP Luke Bard off waivers from the Tampa Bay Rays and assigned him to Triple-A Scranton/Wilkes-Barre.

What is Luke Bard bringing to the Yankees?

So far this season, Bard has utilized a 4-seam fastball, slider, curveball, and cutter as his primary pitches. His 4-seam is generating a .188 batting average against with a 19.4% whiff rate at 94 mph. The right-handed pitcher also features a solid slider, throwing it 26.2% of the time with a .133 average against.

His most productive pitch this season has been his curveball, throwing it 18.2% at 78 mph. Over 10 at-bats, he hasn’t given up a hit, generating four strikeouts, good for a 50% whiff rate.

Bard was assigned to Triple-A Scranton, but I wouldn’t be surprised if they call him up for a test appearance in the coming days to mitigate fatigue. However, the Yankees did just trade for Scott Effross and Lou Trivino, who are both expected to make a big impact moving forward as the team pushes toward the postseason.