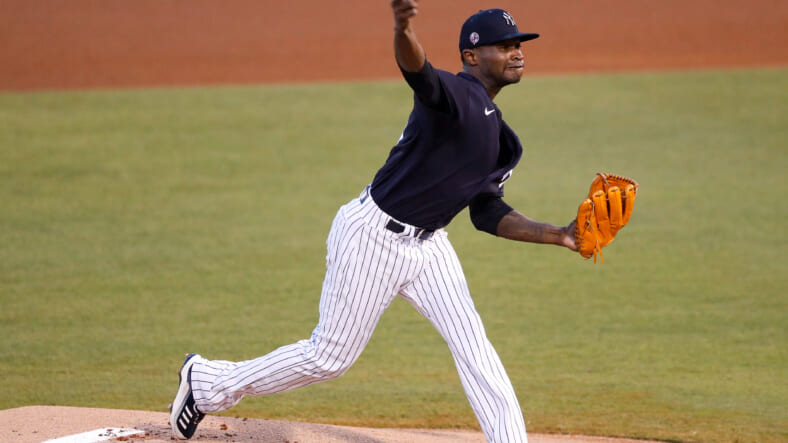 As the New York Yankees enter the final stretch of the regular season tied with the Boston Red Sox and the Toronto Blue Jays in the Wild Card standings, they need all the help they can get to make it into October.

And while they have been suffering from key injuries in their pitching, most notably starter Jameson Taillon and reliever Jonathan Loaisiga, they have also been getting soldiers back. Corey Kluber recently returned from a shoulder injury that took months to heal, and Clarke Schmidt overcame an elbow issue that took away most of his season.

At this point, another Yankeesâ€™ pitcher is close to making a return to the Bronx. Domingo German, who has been out with right shoulder inflammation since July 31, made his first rehab appearance on Tuesday for Triple-A Scranton/Wilkes-Barre.

The Yankees are happy with the early results

The night was a success for him, considering the extended absence. He was on the mound for two innings and allowed a couple of hits (both singles) and no runs. He struck out four hitters in the impressive outing, and used 25 pitches (16 of them for strikes).

The Yankees still donâ€™t know whether to use German as a starter or as a reliever. In any case, the first priority is to make sure he is healthy and ready to handle MLB hitters.

Yankeesâ€™ manager Aaron Boone had stated before he took the mound last night that he wanted to see him go through the outing unscathed, and then he would make decisions regarding his immediate future.

“We’ll see how it goes for him tonight,” said Boone according to MLB.com. “See how he responds; at that point, make a decision. But we expect him to be back with us sooner rather than later.”