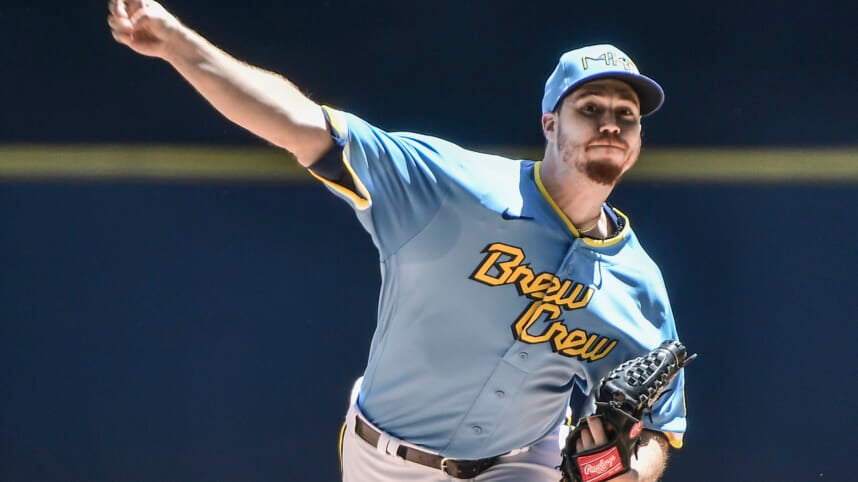 The New York Yankees continue to add pitching support, having recently signed left-handed bullpen arm Anthony Banda to help smooth over the loss of Aroldis Chapman, who was placed on the 15-day injured list with a leg infection.

On Tuesday afternoon, the Yankees announced they signed starting pitcher Chi Chi Gonzalez, a 30-year-old right-hander that stands at 6’3″ and 210 pounds.

What is Chi Chi Gonzalez bringing to the Yankees?

Gonzalez has made six appearances this year, pitching 18.1 innings with the Minnesota Twins and Milwaukee Brewers before being released. He features a 6.87 ERA on the season and 4.31 xFIP. He has 5.89 strikeouts per nine, a 66.7% left on base rate, and 42.9% ground ball rate.

Looking at his specific pitch sequence, Gonzalez utilizes a slider, 4-seam fastball, sinker, and change-up. This season, his slider is generating a .200 batting average against with a 21.4% whiff rate at 84.1 mph.

His slider actually isn’t that bad, generating 46% more horizontal break than the average pitcher. Opposing hitters are batting .294 off his 4-seam fastball, which is a bit of an elevated number, but with that type of slider, it is possible the Yankees look to utilize him situationally if they decide to call him up from their minor-league system.

After elevating Greg Weissert from Triple-A Scranton, filling his spot with Gonzalez makes sense. They may look to utilize him as a bullpen arm and rely heavily on his slider.

It makes no sense to deploy him as a starter with Nestor Cortes nearing a return. This is undoubtedly an interesting signing, but clearly, they see some value in Gonzalez, having him on call if need be.