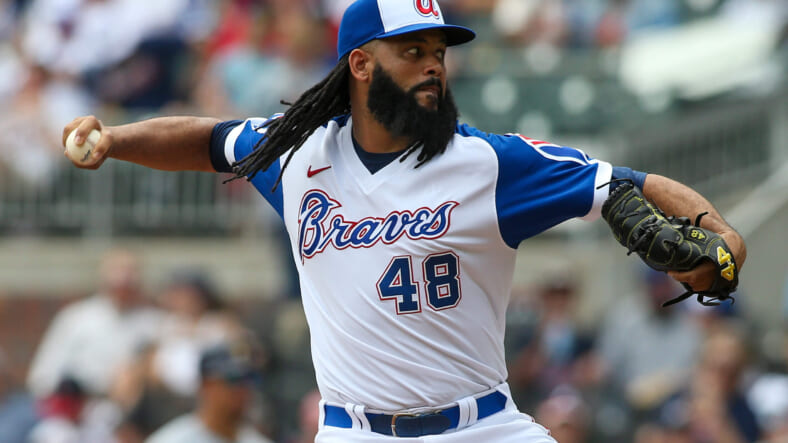 The New York Yankees’ bullpen has been facing a bit of adversity lately, specifically in the injury department. With Jonathan Loaisiga working his way back from shoulder inflammation and Ron Marinaccio being placed on the injured list with a shoulder issue, the team dove into the free-agent market for a supplement.

According to Eli Fishman, the Yankees signed relief pitcher Richard Rodriguez to a minor contract. Rodriguez is coming off an 80-game PED suspension, which is why he hasn’t made an appearance during the 2022 season.

The #Yankees have signed five year MLB relief pitcher Richard Rodriguez to a minor league contract. Rodriguez pitched to a 2.94 ERA in 64 games for the Pirates and Braves last season. He’s listed as active on the FCL Yankees roster.

What are the Yankees getting with Rodriguez?

Last year with Pittsburgh and Atlanta, Rodriguez posted a 2.94 ERA over 64.1 innings. Rodriguez is actually a solid bullpen arm with upside, but given his suspension, teams weren’t willing to give him an opportunity.

However, the Yankees are in desperate need of help and support, so Rodriguez fits the bill perfectly. Hosting a 5.88 strikeouts per nine ratio last year and an 80.7% left on base rate, the Bombers shouldn’t expect him to be a heavy strikeout pitcher but an efficient one.

Rodriguez only generated a 31% ground-ball rate last year, down from 39.2% in 2020 with Pittsburgh. He features two primary pitches, a 4-seam fastball, and slider.

Rodriguez has missed half the 2022 season, so it will likely take him some time to ramp up. He will likely fill a role with Triple-A Scranton immediately, but if the Yankees require a player to help mitigate fatigue, Rodriguez could get the call the next few weeks prior to the All-Star break.