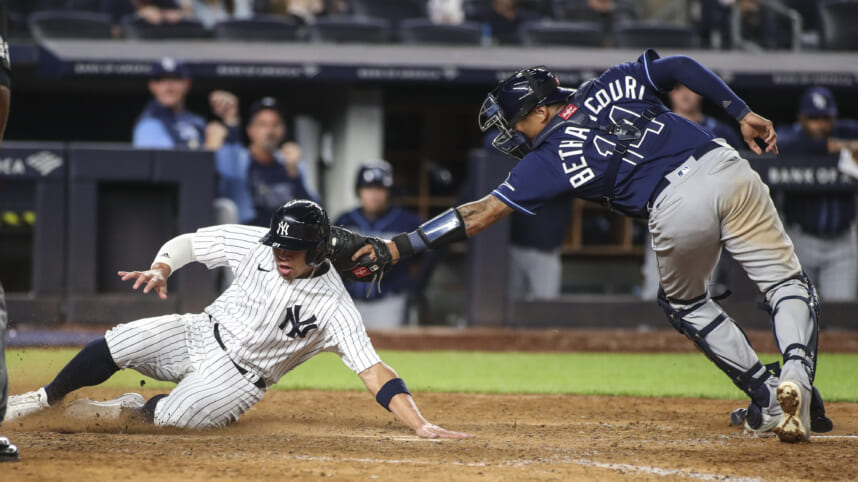 The New York Yankees have been utilizing rookie shortstop Oswald Peraza sparingly since calling him up in early September. However, every time Oswald makes an appearance, he showcases solid defense and good offensive qualities.

Peraza spent 99 games with Scranton/Wilkes-Barre this season, hitting .259 with a 33% on-base rate. In fact, over his last 90 days with the Yankees AAA affiliate, he hit .293 with a 37.2% on-base rate, 12 homers, 31 RBIs, and 19 stolen bases. He did enough to warrant being promoted to the big league squad, and he’s already delivered despite a lack of playing time.

Peraza has made eight appearances for the Yankees since being called up, totalling 23 at-bats. Over that sample size, he’s contributed six hits, two doubles, three walks, and just four strikeouts. He has a .261 average with a 39.3% on-base rate, putting together veteran-level at-bats with patience and conviction.

Oswald Peraza performed well for the Yankees on Saturday:

On Saturday night against the Milwaukee Brewers, he tallied a hit and was hit by a pitch over three at-bats. Getting on base twice among three opportunities is a great clip.

Peraza features a 21.1% hard-hit rate and 78.8 mph of exit velocity on average, dismal numbers at best, but he’s making good enough contact to bloop hits and get on base. He’s still finding his groove and confidence, but for a young shortstop who’s playing sporadically on any given night, he’s battled through a lack of consistency.

Defensively, Peraza has a perfect fielding percentage at shortstop over 55 innings. He’s turned two double plays and has made a net positive impact on the team.

With that being said, I wouldn’t expect the Yankees to be replacing Isiah Kiner-Falefa anytime soon, despite suffering through a losing error against Milwaukee on Friday.

In the month of September, IKF is hitting .326 with a 40.8% on-base rate, fantastic numbers that have completely changed the narrative regarding his production. Nonetheless, his defensive contributions have been inconsistent this year, and if he struggles for any reason in the batter’s box, I wouldn’t be surprised to see Peraza feature more frequently.