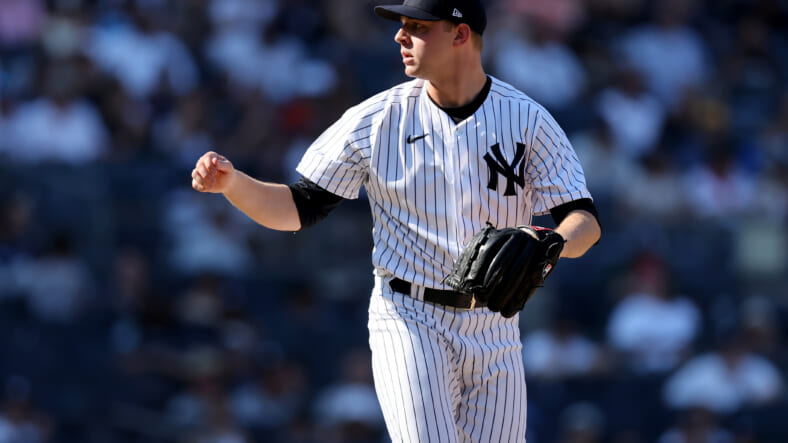 When Michael King went down for the Yankees, some could say that was the beginning of the end. King was absolutely dominant in the time he pitched this season and was one of the most clutch performers in the entire league. Whilst he didn’t have a defined role, King appeared whenever the team needed to get out of a jam — or get through the toughest part of the order. Simply put, my glorious King was probably on track to finish as the best reliever in baseball.

King did it all for the Yankees, thanks in part to a revamped pitch arsenal:

Despite missing the entire second half of the season, no thanks to Aroldis Chapman, King still finished amongst the top of the leaderboards in Reliever fWAR. He appeared in 34 games, tossed 51.0 innings, and posted a dazzling 2.29 ERA & 2.23 FIP. He struck out a career-high 33.2% of batters he faced, good for an 11.65 K/9, and only walked 8.0% — also a career-best. He was on an absolute tear until he had to come in and fix Aroldis Chapman’s mess, thus ending his season. Ron Marinaccio also had a similar dilemma.

King was a true warrior for the Yankees, everything they wanted out of him, he gave them. One of the key reasons behind his success this year is that he reworked his entire pitch arsenal and usage. Last year, King threw his Sinker 53% of the time and barely mixed in his Slider (10.2%) & 4-Seam Fastball (8.8%). This year, King completely changed his approach and the way he attacked hitters. He threw his Sinker less, just 37.2% of the time, and upped his Slider dramatically, throwing it 30.5% of the time. As for his fastball, he was able to up that usage and attacked hitters high more than he did ever before, with a 22.7% usage rate.

Hopefully, King will be able to heal up and get back on the field for next season. As many recall, he didn’t need to undergo Tommy John Surgery, thus leaving hope that he can make a full and quick recovery. Some Yankees fans have been wishing that the team goes out and gets a true, established closer, but I feel like King can answer that call. The Yanks may elect to keep him in the role that he has, as his multi-inning appearances truly help the team out in ways that don’t show up on the stat sheet. If King is to be ready to go for next season, he will undoubtedly be a huge piece for this bullpen and staff.

Michael King would’ve been a huge asset in the Postseason:

As we saw in the postseason, many times, Boone was unsure who to turn to in the big moments. If King were in the bullpen, he would’ve been deployed like Seal Team 6. On top of King changing his pitch arsenal and seeing the results directly, he also posted career bests in GB%, FB%, and HR/FB%.

In every facet of the game, he excelled and posted personal bests. In 14.1 ‘High Leverage’ innings, King struck out 39.6% of batters, only surrendered 8 hits, and saw hitters OPS .564 against him. He was by far the best reliever on the squad, and when he pitched, the Yankees oftentimes won the game.

Michael King also joined fellow-injured relievers Scott Effross and Ron Marinaccio with the team during the ALCS. Despite being injured, they all felt it was only best if they supported their team. Marinaccio stated, “You’re a huge part of this team. You’re still a huge part of this team.” I expect King to be used as a bullpen weapon of mass destruction next season, and the team & its fans will be ever grateful for their King.

The Yankees could use a healthy King next season more than ever, and the potential of him being stretched out to a starter still remains. Without Taillon next season, and question marks over who will take the reins in the rotation, maybe Michael King is a dark horse candidate.