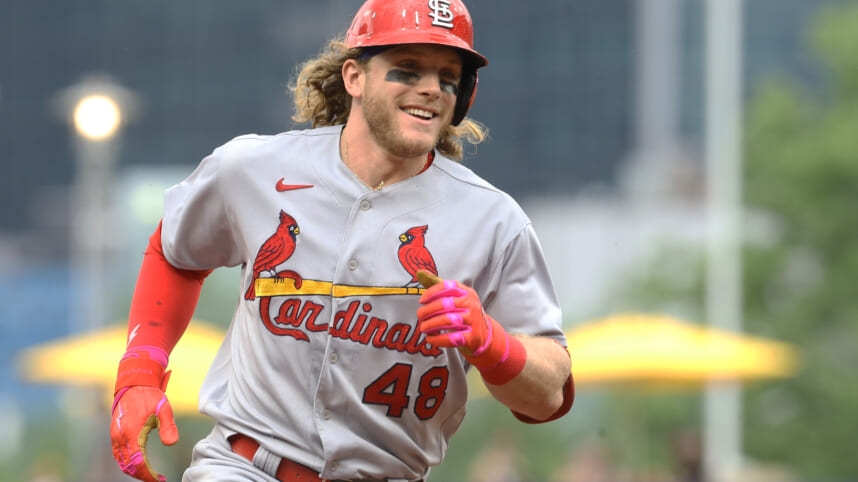 The New York Yankees are waiting patiently for the return of acquisition Harrison Bader, in which they traded Jordan Montgomery away to the St. Louis Cardinals for.

Montgomery has been incredible for St. Louis since being moved, featuring a 0.35 ERA. In exchange, Bader hasn’t even played a game for the Yankees yet, dealing with plantar fasciitis.

In fact, Bader has been in a walking boot for several weeks, missing 47 games up to this point. He’s played just 72 games this season, hosting a .256 average with a 30.3% on-base rate and .370 slugging percentage.

However, manager Aaron Boone believes he will be a significant piece to the roster come the playoffs. Ever since calling up Oswaldo Cabrera from Triple-A, centerfielder Aaron Hicks hasn’t made many appearances.

Cabrera has featured in right field, with Aaron Judge taking over in center. Cabrera already has 5 defensive runs saved above average, but his role will be diminished in the post-season when Bader and Matt Carpenter eventually return to the starting lineup. That doesn’t mean his role will be completely axed, more-so filling in when need be.

Harrison has been ramping up his rehab over the past few days, resuming running, and was going about 85% on Wednesday. Bader felt great operating at nearly full strength, but now he has to ramp up his bat and enjoy a few rehab assignments with a minor league squad before returning to the major league team.

“…he probably in the next couple of days will start to throw a little bit and hit a little bit. Then hopefully it’ll move pretty quickly.”

There is no doubt that Harrison will offer the Yankees a tremendous defensive player. This year, he features a -2 defensive run saved above average but recorded 15 defensive runs saved above the average in 2021. He has some of the best range in baseball in CF, which will shift Judge back to right field.

The Yankees are hoping they can get more value out of Bader during the playoffs, not only as a defensive weapon but also on the base paths. The 28-year-old stole 15 bases in 72 games, matching his career high back in 2018 over 138 games.

His speed offers the Yankees tons of value, easily scoring off singles once he reaches second base. This season, Bader has collected 48 singles, stealing a second base on nearly 1/3 of those hits.

Hopefully, there are no setbacks with his injury moving forward since plantar fasciitis can be a bit tricky to deal with. Nonetheless, there is only good news so far regarding his recovery.