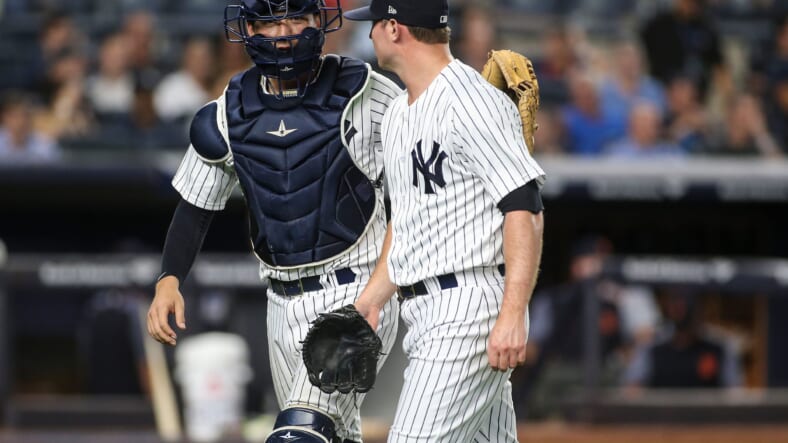 Losing Michael King was a devastating blow to the New York Yankees bullpen, but they required some reinforcements over the past few days. Notably, general manager Brian Cashman traded for Scott Effross of the Chicago Cubs and landed Lou Trivino in the deal that brought Frankie Montas to the Yankees.

However, the team is also expected to return Zack Britton in the coming weeks, recovering from Tommy John surgery after a tumultuous 2021 season.

Britton pitched just 18.1 innings last year, posting a 5.89 ERA. In fact, he pitched only 19 innings in 2020 as well during the Covid abbreviated season, keeping him off the baseball diamond for the majority of the past two campaigns.

The Yankees should get Zack Britton back at some point this season:

However, Britton is making a solid recovery and should be able to contribute this year in some way. At the very least, he can help take some pressure off Clay Holmes in the closer role if he can return to his normal self. Back in 2019, Britton posted a 1.91 ERA over 61.1 innings, generating an impressive 77.2% ground ball rate and 86.8% left on base rate.

Zack is known for his ability to generate weak contact, which normally produces double plays. Recently, he participated in a 14-pitch live batting practice in Tampa. Luckily, everything went well, according to Aaron Boone.

“I actually talked to him (Thursday),” Boone told reporters on Friday. “He was really excited about it. I watched it. Looked good. The sinker profile looked really good. I think perhaps as big as anything, I think the next day he felt really good, strong. So, I think he’s got another bullpen this weekend and I think he’s got another live session in the middle of next week.”

This is fantastic news for the Yankees, who are slowly getting him back. Britton has a tremendous sinker, which he utilizes at an 80% clip every year. If his profile is showing progress and success once again, the Yankees will undoubtedly look to utilize him down the stretch and maybe even during the postseason if he shows some consistency.

“It’s gone well,” Boone said. “It really has. Every step of the way, I think while talking with him about it, all the steps, he’s been really encouraged. He’s done a lot of really good work down in Tampa with not only coaches but with sports science stuff. He’s worked on a lot of things that I think he feels good about. But again I don’t want to put some kind of expectation on it. He’s doing really well and we’ll just continue to see if and when he becomes a factor for us.”

With the Yankees also projected to get back Miguel Castro from the 60-day injured list in a few weeks, they should have plenty of reinforcements to work with. They might not have enough roster spots to host all of them, considering they optioned Ron Marinaccio to Scranton to clear a spot for Frankie Montas.