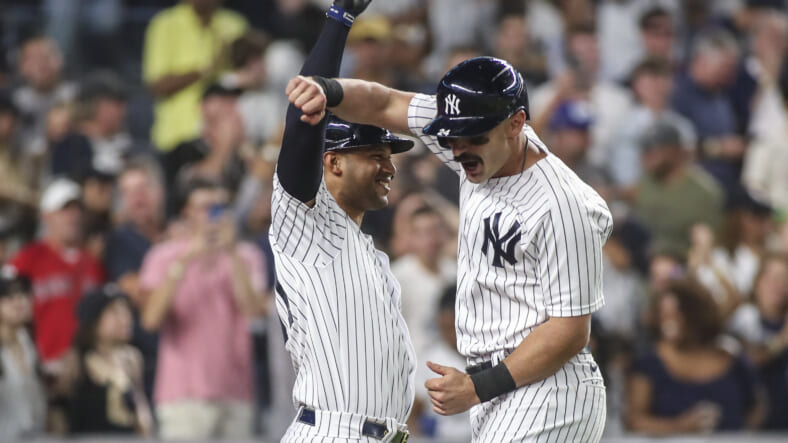 While the New York Yankees lost to the Seattle Mariners on Wednesday afternoon, they did receive a bit of positive injury news on lefty slugger, Matt Carpenter.

Carpenter fouled a ball off his left foot several days ago, causing a fracture. There was a legitimate reason to believe that he could miss the rest of the 2022 season.

In fact, Matt was incredibly somber after the injury but remained confident he could return before the postseason.

Great news for the Yankees on Matt Carpenter:

However, reports have indicated that Carpenter will miss 6–8 weeks after a clean break in his left foot. That means he can make a return during the postseason in late September. Carpenter has been a godsend for the Yankees this year at 36 years old, coming off two disappointing seasons with the St. Louis Cardinals. Carpenter refined his swing and left the Yankees hitting .305 with a 41.2% on base rate before going down.

Hosting a 22.7% strikeout rate and 12.3% walk rate, Carpenter was an integral piece of the Yankees’ offensive strategy over 47 games after being picked up from Texas’s AAA affiliate.

The veteran is doing everything he can to speed up the recovery process, but it will likely take him the full amount of time to make a return, especially needing to run the bases and offer a bit of athleticism.

Per Marly Rivera of ESPN:

“I’m going to do the best I can to speed the process up and be ready to go.” Carpenter did say “a number” (of weeks for recovery) was given to him, but added that he’ll be back as soon as he “feels good” about it and doesn’t want to put a timeline on it.

Nonetheless, this is a huge positive for the Yankees who have been hit with a multitude of injury woes. Getting his bat back during elimination rounds will help the team stifle some of the more lethal opponents they will have to face in October.